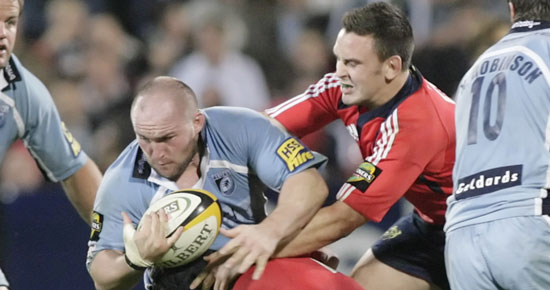 Playing against arguably their toughest opponents to date, Munster came up short against the Cardiff Blues losing 19-17 in front of a noisy 6000+ crowd at Musgrave Park on Friday night.

The star of the show for the visitors was wing Tom James who scored two tries, one in each half although it was his second, just after the start of the second half that did most to dent Munster’s hopes of victory.

Munster had come from being 11-0 down to get to within a point of the Blues thanks to an injury time try from Mark Melbourne converted by Paul Warwick, but the concession of that second James try and a penalty from Nick Robinson had them chasing the game again in the second half just as they had in the first.

And they did so in some style with Niall Ronan ending a period of pressure with a try that Warwick converted to leave his side in sight of victory. However in the closing minutes they needed a little more composure when attacking just outside the Blues 22 to perhaps set up a drop-goal attempt for replacement Jeremy Manning. One drive too many ended with a turnover and the opportunity to snatch victory slipped away.

Cardiff dominated the opening exchanges and went in front after 7 minutes when Robinson kicked his first penalty. The out-half then launched a ‘bomb’ that Shaun Payne spilled and James was on hand to hack ahead and score and although Robinson missed the conversion he made amends with a penalty for a well merited 11 point lead.

Warwick was off target with two long range penalties before missing an easier effort but he found his range with a fourth attempt and then his superb touchfind set up position for the Munster pack to send Mark Melbourne over for a try. Warwick’s excellent conversion left just one point in it at the interval.

James then extended the lead with a great touchline dash for a try and Robinson extended the lead with another penalty. Munster did put themselves right back in contention with that Ronan try and had the opportunity to snatch a victory and while an error at the end cost spoiled thast plan, ultimately it was the ones made earlier that proved the costliest.