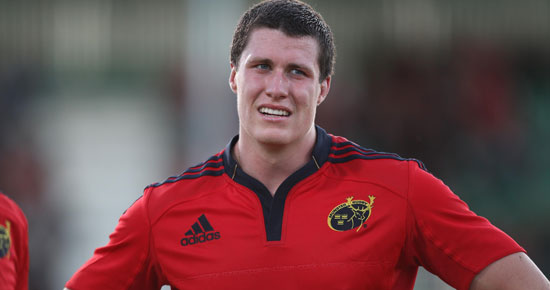 They may be separated by five places in the RaboDirect PRO12 league table but there’ll be very little to choose between Munster and Ulster at the end of 80 minutes tonight in Ravenhill.

Five places maybe, and 12 points divide third from eight and Ulster have carefully selected this week to ensure they give themselves the best possible chance to reduce that deficit and propel themselves back into top four contention.

They'll suffer the loss of the losing bonus in Dublin, that seemed well within their compass when James McKinney converted Chris Cochrane's 47th minute try, but will be a tad harder on themselves if they don't garner at least four from the game tonight. And they've selected accordingly.

McKinney and Cochrane will be spectators tonight, their next outing probably in the B&I quarter final against Munster.

Otherwise it's as you'd expect, Ulster as strong as they can be. A sold-out Ravenhill on the eve of New Year's Eve. Mighty.

As for Munster ? Well, they'll be led by Mick O'Driscoll winning his 195th Munster cap alongside, in the second row, Ian Nagle, with just 180 caps less who put in a full shift here last year.

Behind them there's Dave O'Callaghan back in the side after injury having debuted against Ospreys in early October with Luke O'Dea in for his third start and John Ryan and Paddy Butler on the bench.

While there can be little quibble with the outcome, Munster will know that they should at least have made this a much closer contest than the final 33-17 scorleine suggests.

For their part, Ulster will point out that Munster hadn't scored for 48th minutes before Johne Murphy took advantage of a lapse in concentration to score in the 77th minute.

And it was concentration and trouble at the base of the scrum that turned this game in Ulster's favour, the northerners taking full advantage of errors in that area to score tries in the 45th (Ian Humphreys) and 55th minutes (Ruan Pienaar). Humphreys hacked through to score beside the posts and bizarrely missed the conversion into the goal that Ian Keatley missed a 34th minute penalty that had a significant bearing on the outcome.

At that stage, Munster who had been giving as good if not better that they were getting, trailed 13-10, thanks to a well taken Luke O'Dea try – from a clever crossfield Keatley kick and subsequent superb touchline conversion – and his 29th minute penalty.

From the restart, Stefan Terblanche, who'd scored their opening try, began the move that ended with John Afoa's score converted by Humphreys that represented a ten point turnaround in the home side's favour just before they went in for the break.

By this stage Munster had already lost the influence of both Tom Gleeson (shoulder) and Tommy O'Donnell (knee) and things didn't improve when Humphreys capitalised on that error to score his side's third try.

Damien Varley (shoulder) was the next to retire injured, Pienaar pounced on the next tail of scrum mistake and Munster found themselves with a mountain to climb although with 25 minutes to try.

And in fairness they did make the effort but on several occasions in the opposition 22 turned over ball to make life easy on Ulster and hard on themselves.

There were positives however, a first half performance into the wind that boded well and the fine displays of Dave O'Callaghan and Paddy Butler when he came on as a 34th minute replacement for O'Donnell who was also going well until injured. Luke O'Dea looks to have all instincts of a good try poacher, Murphy was safe as houses under the high ball and needed to be, Ian Nagle took on his share of ball and of course Mick O'Driscoll lead as he normally does from the front. 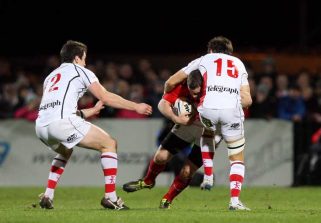 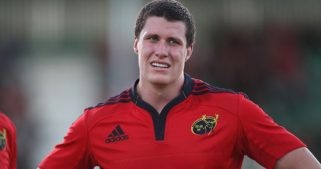