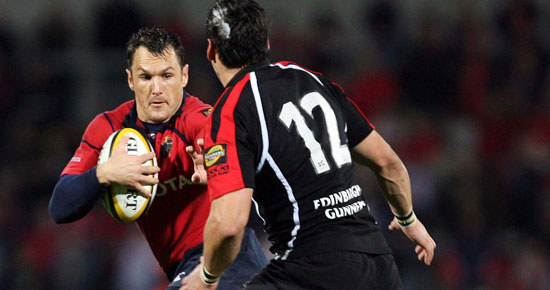 In losing 21-10 to Edinburgh in front of an 8000 strong crowd, Munster produced a hugely disappointing performance that sees them remain second from bottom in the Magners League table just four points clear of Boder Reivers who had a 22-19 win over Leinster.

Munster were forced to re-arrange their selection in the hours before kick off when Paul O’Connell cried off and they lost Ronan O’Gara after just nine minutes when the out-half took a knock to the shoulder.

Neither are considered in doubt for next weekend’s Heinken Cup clash with Leicester Tigers but on the evidence of this game Munster have an awful lot of work to do if they are to avoid a hammering at Welford Road.

Put simply Munster were very poor. They trailed 14-3 at half time but just as in the game against Leinster were still in contention when referee Phil Fear whistled the start of the second half. After five minutes of play they were dead and buried when Simon Webster capitalised on yet another Munster mistake to scamper in under the posts.

There was something of a response when Denis Leamy crashed over for a try but in truth they never really looked likely to overturn the Edinburgh lead and got exactly what they deserved.