If Munster don’t continue their remarkable record against the Scarlets it need not be the end of their play off ambitions but that’s not the case for the home side in this evening’s RaboDirect PRO12 game at Parc Y Scarlets (6.30).

Munster have won the last fourteen encounters since losing the 2007 Heineken Cup encounter and Scarlets coach Nigel Davies believes it's time to stop the rot. "It is a huge fixture for us, it is going to be international intensity because that is what Munster bring," he said this week.

"It has been almost impossible for us to beat them so regardless of what we can and can't do this year, it is important we put a marker down for the next couple of years."

The last few encounters have been of the closest kind and in particular those back to back games in the Heineken Cup when only a score separated the sides. However, the incentive for Scarlets stretches beyond simple revenge with Davies aware that there's only one outcome that will suffice if his side are to keep their play-off hopes alive.

"We do need favours and to get total control we need to win, win well and try and stop Munster getting anything out of the game."

George North is back on the wing having missed the trip to Aironi with a groin injury but centre Jonathan Davies is missing with a similar complaint and his place goes to the veteran Stephen Jones whose positioning there will give the Scarlets added options off the set scrum.

Deacon Manu is another influential player who's back in the side and he'll be up against Dave Kilcoyne who makes his first start in a Munster line-up that shows four changes from the side that defeated Glasgow Warriors in Cork last weekend.

Munster ensured themselves a place in the RaboDirect PRO12 play-offs with this 20-20 draw at Parc Y Scarlets where they had to withstand a late and furious onslaught from a home side who trailed 20-10 at one stage.

It just now remains for the final round of games on May 5th to determine whether Munster must travel back to Wales for a tilt at the Ospreys or plan the shorter trip to Dublin and a clash with Leinster.

In south Wales on Saturday Munster played their best rugby in the opening half when they had tries from Donncha Ryan and Simon Zebo – his seventh of this campaign – to lead 17-10 at the break. They might have put the result beyond doubt early in the second half when an attempted Ospreys clearance in the right-hand corner was blocked to set up a sequence of play that saw Ian Keatley knock-on as he attempted to gather for a certain try under the posts.

The Munster out-half knocked over a penalty minutes later after Sione Timani had been penalised for a late hit on Peter O'Mahony but Adam Shingler's try on the hour mark, converted by Rhys Priestland kept the home side very much in the hunt and with ten minutes to go, Priestland tied the game to set up a frenzied finish.

Credit then to the Munster defence who were quite superb and disciplined in those closing minutes as Scarlets, roared on by the near 11,000 crowd, threw everything at them. Credit too to referee Alain Rolland who can't have been oblivious to the unacceptable chants from the Scarlets crowd, for keeping his nerve as Scarlets did their utmost to force the penalty that might have given them victory.

Rolland took the field to a chorus of boos – the Welsh still obviously unwilling to forget his World Cup dismissal of Sam Warburton – even though the player himself supported the decision – and earned further crowd ire when awarding a penalty at scrum-time after seven minutes.

Keatley was wide of the mark and three minutes later, Scarlets broke from their own 22 for Sean Lamont to score in the right hand corner, Priestland's conversion gving them the perfect start.

Munster's set piece was a source of strength throughout and it provided well worked tries, first for Donncha Ryan who simply walked over Priestland in the 17th minute after Mick O'Driscoll had stolen a Scarlets line-out and then Simon Zebo who did well to score in the tackle after a sublime inside pass from Keatley four minutes later.

Priestland and Keatley traded penalties either side of the break before Adam Shinger's 60th minute was converted by Shingler to leave three points separating the sides.

A bad touchfind miss from Keatley handed Scarlets the initiative back to Scarlets but the out-half was a central figure in that end game Munster rear-guard action that saw them earn a deserved share of the spoils. 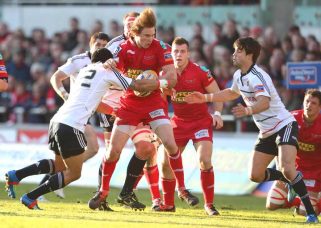