No matter how you dress it up, beginning your Heineken Cup campaign with a trip to France is not the chosen route for any side with ambitions of furtherment.

In an ideal world when you have a French side in your Pool and particularly one of the quality of Racing Metro, the preferred option would be to get them at home first and then travel for the last Pool game in the hope that by then their interest in the competion will have waned and their focus returned to their beloved Top 14.

But as things stand Munster must do it the hard way and this afternoon Doug Howlett will lead his side out at an 81,000+ capacity Stade de France where 30,000, mostly Parisians will give vent to their enthusiasm for a side that ironically will contain not one Parisian.

Nevertheless, in a mirror image of what Max Guzziani did at Stade Francais, Jacky Lorenzetti has done at Racing and his assembly of high profile and high paid United Nations of players include the likes of Mirco Bergamasco, Olly Barkley, Andrea Lo Cicero, Dimitri Szarzewski and skipper Jacque Cronje.

And it all adds up to a pretty heady mix.

They don't have a European pedigree to speak of but they do have experience and the quality of player that gives them street cred and like any French side they, when they're on their game they can be fairly lethal.

And what of Munster? They probably find themselves in a similar situation that Paul O'Connell, Ronan O'Gara, Marcus Horan and Peter Stringer – veterans of today's side – found themselves at the start, when they set out on what was to be a marvellous journey some ten plus years ago.

Then, they were the young guns looking to Mick Galwey, Peter Clohessy, Dominic Crotty et al for leadership and direction. And now its their turn to play that part.

To that end the inclusion of O'Connell is a massive boost and particularly in the absence of Donncha O'Callaghan who was enjoying a rich vein of form.

The battle up front will be as physical as it will be decisive and if Munster can break even in that area, they do have the quality in the backs to leave Paris with points in the bag.

Defeat Snatched From The Jaws Of Victory ?

Munster came agonisingly close to starting off their Heineken Cup campaign with a rare win on French soil, very sodden French soil, but in the end had to settle for a losing bonus point when two late penalties gave Racing Metro a 22-17 win at Stade de France.

The course of the game might best have been described by Sky's Graham Simmons whose opening post match question to Rob Penney went, "Rob, that was a game you looked to have won, then lost, then won again, before you lost it ?"

Penney for his part chose to identify a period in the opening half as being crucial rather than those late in the game that gave Racing the lead and ultimate victory.

"Way back at the start, early on we were in control. And we lost one over the line. And then we got a scrum penalty for some reason and they got into our half. Then we tried to spin a bit of mucky ball. They latched onto it. Toed it through. So that was a fourteen points turnaround at that stage. Got their tails up a little bit."

The ball that was 'lost over the line' initially was adjudged a try by referee Greg Garner who then went upstairs on the advice of his assistant on that side.

And if O'Connell could have been deemed unlucky then minutes later scrum-half Maxime Machenaud was as lucky as the proverbial cut cat to be awarded a try after he clearly had no control on the ball he flopped on over the Munster line, that incident coming as Penney said Munster had tried to move the ball in awful conditions and on a pitch that was barely fit for purpose following the soccer game the previous night and incessant rain after.

They started brightly in horrible conditions and showed commendable control of the bar-of -soap ball. The Munster scrum pummeling their opposition, Dave Kilcoyne mincing his opposite international number.

Ronan O'Gara kicked them in front after 8 minutes before a behind his back take by Peter O'Mahony sparked the first try. O'Mahony made inroads before passing to Sean Dougal who bounced Machehenaud's tackle to score under the posts.

Thirteen ten down at half time and then the gap out to six after Olly Barkley had kicked another penalty in the 51st minute, it looked like there was no way back really as Racing gave flight to the ball at every opportunity to force Munster to attack from deep.

But attack they did and Ian Keatley, into the number 10 berth when Ronan O'Gara was forced off (hamstring) after just 33 minutes, had an opportunity to narrow the lead with a 62nd minute penalty that he missed but made amends with a superb conversion after Simon Zebo's fine solo try put Munster a point ahead.

Then from the restart Conor Murray attempted to run ball out of defence, got nabbed and isolated to concede the penalty that Barkley belted over for a 19-17 lead.

Any chance of a last gasp effort ended when from the restart Munster were again penalised, very dubiously – " from the kick-off they looked to have lost the ball forward and one of their players was in an offside position to gather it and none of the officials picked that up." was Penney's view – and Mirco Bergamasco kicked the penalty with almost the last action of the game. 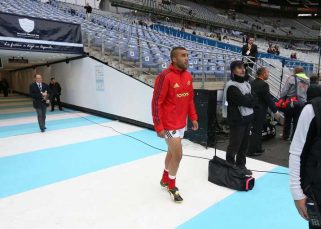