Defeat For Munster in Galway 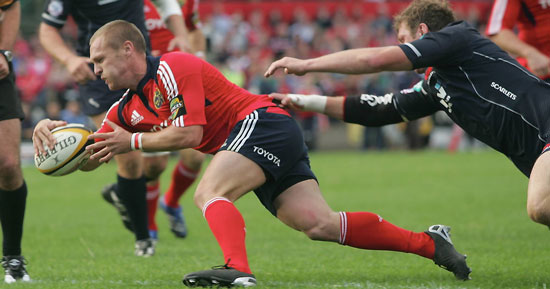 Munster ended the 2008 year in the Sportsground on a low when they went down 12-6 to Connacht.

They trailed 6-3 at the break and although Paul Warwick leveled early in the second half and although they enjoyed the majority of possession and field position they were unable to make it count, two Ian Keatley penalties enough to give Connact their first win over Munster since 1986 and their first in Galway since 1979.

Munster started well and took the lead when Warwick chipped over an 8th minute penalty as his side dominated the early exchanges. Keatley on the mark in the 37th minute with a penalty effort for an offence that saw Niall Ronan banished to the sin-bin just minutes after his ankle-tap had saved a possible Andrew Farley try.

Warwick was wide with a long range effort and after Keatley had kicked two penalties, Munster went into the break three points and one man down.

They were level within minutes of the restart thanks to a Warwick penalty but a second effort from the out-half from a similar position went well left and wide. Their second sin binning occurred in the 57th minute when Doug Howlett was sent to cool his heels for a tackle on Gavin Duffy.

On two rare incursions into Munster territory, Connacht snaffled six points and it was only in the closing minutes that Munster finally injected real intent into their backline attack, Howlett screaming down the right touchline and chipping ahead only for the bounce to deny Keith Earls and then right at the death, Frank Murphy’s cover tackle once again denying Earls after a good break from Lifeimi Mafi.