Munster make a total of 11 changes to the side that started against Toulon as they return to action in the RaboDirect PRO12.

In the penultimate round of the league, Munster travel to Meggetland for Saturday evening’s clash against Edinburgh, ko 5pm.

After last night’s Ospreys defeat to Zebre Munster are now guaranteed a semi-final place in the PRO12 with Leinster and Glasgow. But the province will continue to battle for a top-two finish with the Edinburgh challenge up first this weekend.

A new look front row sees James Cronin and John Ryan pack down on either side of Duncan Casey. Having featured last weekend against Toulon, Cronin makes his first start for the province since Treviso in March.

The familiar duo of Paul O’Connell and Donncha O’Callaghan combine forces in the second row while Tommy O’Donnell and Paddy Butler return to the starting line-up alongside CJ Stander in the back row. Last time out in the league Butler impressed with a man of the match performance, securing the bonus point try at the Sportsground.

After an excellent rehab on a groin injury, JJ Hanrahan suffered no ill effects from the last 20 minutes of last weekend’s encounter in Marseille and partners up with Conor Murray in the half backs.

Denis Hurley and Johne Murphy, both of whom signed new contracts with Munster this week, form the centre partnership. While Simon Zebo switches to full-back this weekend with Andrew Conway and Gerhard Van Den Heever introduced on the wings.

The province take a strong bench to Scotland that includes five of last weekend’s starting team, and Luke O’Dea is named in his first senior squad of the season after overcoming a string of injuries. 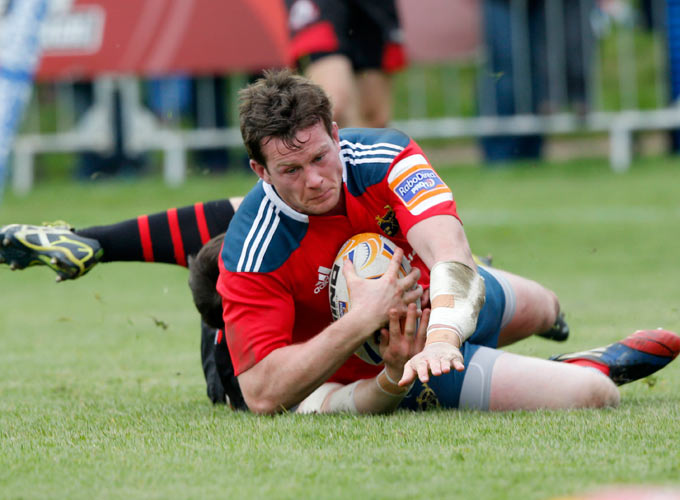 Munster who are through to the knock-out stages of the competition are now 1 point behind second placed Glasgow and still in the hunt for a home semi-final.

Bezuidenhout opened the scoring for the home-side after a period of early pressure and the out-half powered over for the first try of the game after 8 minutes. Laidlaw was unable to add the difficult touchline conversion and 5 minutes later JJ Hanrahan got Munster underway when Edinburgh were penalised for going off their feet.

CJ Stander, who was once again in impressive form causing havoc for the Edinburgh defence, found space down the wing and showed great awareness to offload inside to flyer Andrew Conway who sprinted in for Munster’s first try under the posts. With JJ adding the extras Munster moved ahead by 5.

But Edinburgh were quick to react and resumed control of the game when attacking deep inside Munster’s 22 Willem Nel reached over for the Scots second try. Referee Mitrea consulted with the TMO for the grounding but once awarded Laidlaw made no mistake with the conversion and Edinburgh went ahead.

The score-line swung in Munster’s favour after a successful Hanrahan penalty and a well taken try by Denis Hurley was converted by the out-half just before the break. John Ryan instigated the initial Munster attack crashing up the middle, and breaking into Edinburgh territory. The extended Munster pressure paid off when breaking wide and Stander popped the ball back inside to Denis Hurley who weaved through the defence.

Munster returned to score five unanswered tries, all converted, in the second half with replacement hooker Damien Varley claiming the first score off a maul after the pack grinded their way over the line. With JJ adding the conversion Munster led 27-12 after 50 minutes.

The pack continued to turn the screw and after a succession of dominant scrums were rewarded with a penalty try 5 minutes later.

Duncan Williams then broke through for Munster’s fifth try after a skilful passage of offloading play from James Cronin released the replacement scrum-half into open space.

Edinburgh’s woes continued when reduced to 14 for the final 10 minutes with Gilchrist sent to the bin, and Munster were awarded their second penalty try. Conor Murray took over kicking duties and kicked his first points for Munster.

Rob Penney’s men rounded off their performance with a Tommy O’Donnell try scored in extra-time and Murray had the final say with his second kick at goal to give a final score, Edinburgh 12 Munster 55. 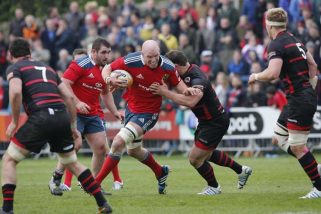