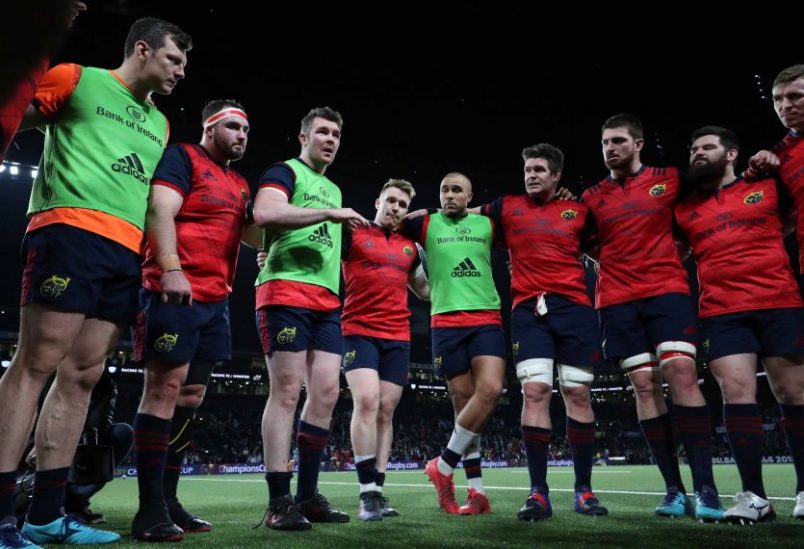 Munster captain Peter O'Mahony speaks to his team in the huddle. INPHO/Billy Stickland

For the first time this season an unchanged starting XV has been named for Sunday’s must-win round 6 Champions Cup clash against Castres Olympique in Thomond Park (1pm).

Tickets for the game are available online, from the Munster Rugby Ticket Offices at Thomond Park and Irish Independent Park or by calling 061 421103.

Following Sunday’s 34-30 defeat to Racing 92 in Paris, as expected, Peter O’Mahony has recovered from an ankle knock to captain the side.

International hooker Niall Scannell returns from the rib injury sustained against Ulster on New Year’s Day to be named in the replacements.

The front row is made up of Stephen Archer, Dave Kilcoyne and Rhys Marshall as Billy Holland is partnered by Jean Kleyn in the second row. The pack is completed by a back row of O’Mahony, Chris Cloete and CJ Stander.

Tickets for the game are available online, from the Munster Rugby Ticket Offices at Thomond Park and Irish Independent Park or by calling 061 421103. 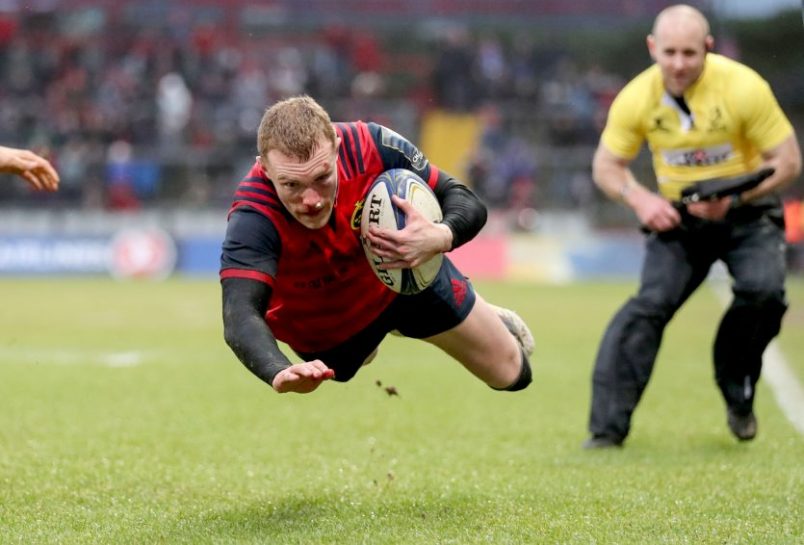 Munster are into a record 17th Champions Cup quarter-final, where they will host Toulon, after a bonus-point 48-3 victory over Castres Olympique at Thomond Park on Saturday afternoon.

Ticket details for the quarter-final will be announced shortly with the game taking place on the weekend of March 30/31/April 1.

A first-half try from Man of the Match Keith Earls along with two penalties and a conversion from Ian Keatley gave Munster a 13-3 half-time lead.

An early second-half try from Rhys Marshall settled the nerves before a penalty try sealed the win. Simon Zebo scored the bonus-point try before Alex Wootton and James Cronin put the icing on the cake.

A fierce downpour in the hours before kick-off meant the game was delayed for three hours with the start moved from 1pm to 4pm by referee Ben Whitehouse.

The Thomond Park groundstaff did an outstanding job in the intervening hours to remove the standing water.

When the Munster side did eventually emerge for the game three hours later than intended, the supporters gave them a fierce welcome and were behind the team from the off.

Castres owned the ball for nearly the entire opening 10 minutes with Munster defending well. A lineout steal from captain Peter O’Mahony and some very composed full-back play by Simon Zebo were the early highlights for the hosts as they weathered the early Castres storm.

A first Munster surge brought the hosts back into the game and after the creaking Castres defence gave away a penalty, Keatley stepped up to level matters after 18 minutes.

A massive scrum from the pack earned Keatley another opportunity and the out-half made no mistake to give Munster a 6-3 lead after 25 minutes.

The hosts were really warming to their task now and after a series of drives were repelled by the Castres defence, at times illegally, centre Thomas Combezou was shown a yellow card for his team’s persistent infringement.

Munster opted for the scrum and when they were awarded a free-kick, Conor Murray took a quick tap, passed outside to Keatley and he sent Earls away for the first try in the left corner.

A brilliant touchline conversion from Keatley made it 13-3 and that’s how it stayed until the break.

Munster were in for a second try after a dominant start to the half thanks to an unstoppable rolling maul with Marshall touching down and Keatley again on target with the tough conversion.

Murray was denied a try after losing control of the ball just before he grounded on 55 minutes and Castres replacement prop Daniel Kotze was sin-binned moments later after another scrum infringement from the visitors.

A penalty try was then awarded after brilliant work by the pack in the scrum as Munster moved into a 27-3 lead after 57 minutes.

The bonus point was wrapped up just before the hour after magnificent work from Zebo and Earls with the latter making a scorching break before passing to Zebo to evade two defenders for a special score. Keatley’s conversion made it 34-3 and the game was up.

Munster added a fifth with 12 minutes remaining as winger Wootton burrowed his way over for a first Champions Cup try. JJ Hanrahan, on for Keatley, added the extras and Munster led 41-3.

There was time for another try as James Cronin capped off an immense performance with a sixth try, this one off a rolling maul, and Hanrahan’s second conversion was landed with aplomb to seal a magnificent 48-3 victory.

Munster qualified for a record 17th Champions Cup quarter-final with Toulon visiting Thomond Park on the weekend of March 30/31 April 1 (fixture and ticket details to be confirmed shortly).

Dave Kilcoyne limped off after 17 minutes and will be assessed by the medical team.

Niall Scannell made his return from injury as a second-half substitute.

Ian Keatley (six from six) and JJ Hanrahan (two from two) were both 100% off the tee. 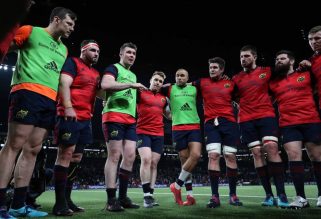