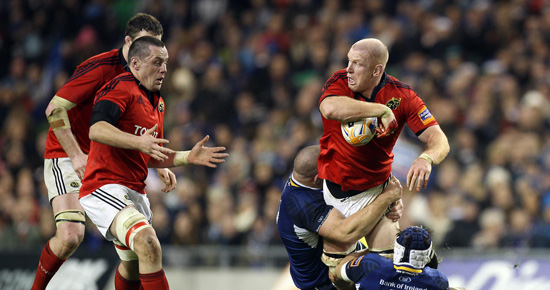 Dark green n black with splashes of yellow was the the predominant colour on the streets of Limerick this morning as Northampton supporters took advantage of the mild weather to stretch their legs ahead of the evening’s fare.

And there was a discernible air of confidence about the followers of the side that went through last year's Pool unbeaten to look cast iron certainties at half time in the final only to implode spectacularly in the second half.

This time around the talk is that they'll draw inspiration from that near miss and they do arrive in Thomond Park Stadium this evening in rude good health following three successive League wins, the latest away to London Wasps.

Much is made of their formidable pack, in particular their front row of Soane Tonga'uiha, Dylan Hartley and Ben Mujati and the prowess both out of touch and in the loose of Courtney Lawes.

Behind that pack they have attack potency in English internationals Ben Foden and Chris Ashton and the Russian flyer, Vasily Artemyev while Ryan Lamb has been in good form from the kicking tee.

All that being said however, nothing they've faced to date will compare to what Paul O'Connell, his teammates and the Munster crowd are going to serve up to them this evening.

Leinster provided the ideal prep last weekend and on a direct formline through Leinster, then this is a game that is well within Munster scope if they bring their best form to what promises to be an enthralling fixture.

Cometh the Moment, Cometh The Men 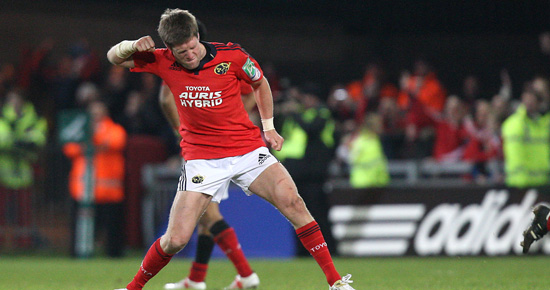 And Cometh the Men, then Cometh the Man. In this case Ronan O’Gara, with all the street smarts and nerves of high tensile steel, accumulated over the 14 years he’s graced this competition.

Some four minutes after referee Nigel Owens had signaled the last play, Munster's valiant squad had worked O'Gara into position. Position being 40 metres from the Ballynanty end uprights. According to Brendan Fanning in the Sunday Independent, "There is not another out-half in the world you would have ahead of O'Gara in such circumstances."

"He controlled much of the phase-building in that sequence," Fanning continued, "and the value of experience in these circumstances is that you have the patience to wait and wait until the time is right."

"So he waited and then delivered with precision that – like the continuity itself – would be hard enough to replicate on the training ground."

That remarkable continuity Fanning refers to, saw O'Gara's colleagues go through 41 phases of play. It saw them driven from the Northampton 22 back to the half way line, at which stage it seemed their chance had gone. But back they came again in the face of brutal Saints defence for O'Gara to reward their efforts with as sweet a strike as he's ever stroked.

And speaking to Miles Harrison (Sky Sports) afterwards describing the team's effort as 'phenomenal, unbelievable' he was magnanimous in conceding that "it must be gut-wrenching for them to lose like that after the game they played. They probably shaded it overall and had their winger not knocked-on there near the end we mightn't be here now talking like this."

That was in the final quarter when Vasily Artemyev latched onto a kick through but as the ball sat up invitingly he knocked-on with the line at his mercy.

Small margins decides these games O'Gara said and those margins weren't one-way. In the first half Denis Hurley was inches away from getting his mitts to an O'Gara dink over the line and Conor Murray was whistled back for a forward pass from Niall Ronan, and although it wasn't as far forward as the one Northampton scored from a week earlier against Wasps, it was forward.

Hurley again came close in the second half running a great line off a Conor Murray pass from a lineout and O'Gara was off the mark with a penalty five minutes from the end of normal time.

Yes, the Saints will feel they left this one behind. And yes their backs looked to have the more structured potency but there was an air of fortune about their second try with a deflection helping to fix the Munster defence. Their pack was also marched back at a rate of knots for Munster's opening try from Damien Varley and were in retreat again when Niall Ronan opted to pick and go left for Murray's disallowed try.

Varley's score and O'Gara's conversion had Munster up and running early before Ben Foden and Chris Ashton combined for the latter to score in the corner, Ryan Lamb's conversion from close to the West touchline, tying the game seven points apiece.

The Saints enjoyed the better of the second quarter, Courtney Lawes providing quality lineout ball but Munster not helping their cause by some careless kicking.

A loose clearance and scrum infringement had Lamb kicking his side six points clear and when O'Gara pulled one back near half time it seemed Munster would be more than happy to go in three points down.

Instead they took a four point lead in thanks to a superb try from Doug Howlett, initiated by Murray and Danny Barnes who took his scrum-half's pass to race deep into Northampton territory before Howlett ran around Foden to leave his out-half a tap-over.

O'Gara extended the lead with an early second half penalty which was the last we heard from him in a scoring sense before his late penalty miss and then his last gasp piece of magicry. 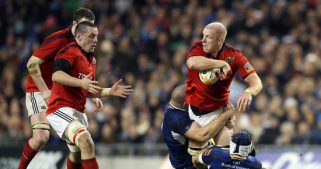