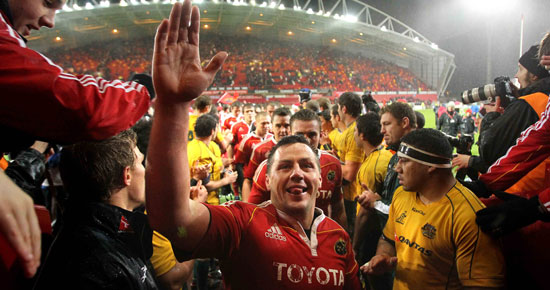 James Coughlan and his class of 2010 wrote another chapter in the glorious book of Munster Rugby tales with the 15-6 win over Australia in a wind ‘n rain swept Thomond Park Stadium on Tuesday night.

It was a victory that invoked every ounce of passion synonymous with anything the province has delivered in the past and heralded the arrival of a new generation of Munster player in the form of Peter O'Mahony, Billy Holland, Duncan Williams and Man of the Match, Ian Nagle.

It might seem churlish to single out individuals because in truth this was a team perforamnce, with every one of those used on a night, totally unsuited to any form of football, giving of themselves an effort that was in the best spirits of anything that the side of' '92 or indeed '78 had produced.

It would also be churlish if the visitors were to put their defeat down to the inclement elements because in their heart of hearts they must know they were beaten by a side who, on the night were simply the best.

All the scores fell to two players, Berrick Barnes (two penalties) and Paul Warwick. All the opportunities fell to one team Munster who were denied a try only by the sort of defending that made the soaked onlookers gasp.

They won the toss but opted to play into the teeth of the gale and that didn't look the wisest option when Barnes booted Australia into the lead after just three minutes. But Munster rolled up their sleeves and soon found themselves going through the phases in the Aussie end of the field.

A series of drives inside the 22 ended with a neat Warwick drop-goal but Barnes restored the visitors slender advantage with another penalty on 29 minutes which Warwick replied to with a strike of his own four minutes later.

Wind the wind at their backs in the second half and with a solid set piece platform Munster were the dominant force. They looked certain to score on several occasions as their packbattered the Australian line but in the end it was the boot of Warwick that settled this in their favour.

Munster's Tony McGahan after Munster's win against his home nation “I’m really delighted for the players more than anything, it was all about the 22 that played here this evening, their display, and the performance and the effort that they put in was a real refection of the group.”

“You have to look at the players, the effort they put in and the game management on the night, both sides had the elements with them and against them and game management wise we played well. I thought our lineout was superb and more than anything I thought it was our breakdown work so full credit to Laurie for the work he has done there.”

"For the young players tonight it was another step forward in their development, there’s opportunities here for them and they’ve taken them as they always have, and they certainly showed that again tonight.”

On Munster’s newest arrive Peter Borlase “It was a really tough night to come into, to arrive here on Thursday, turn around and train and put in a performance like that was fantastic. He’s still getting used to the calls and to his teammates and to come out and do that tonight was certainly a bright start here for him." 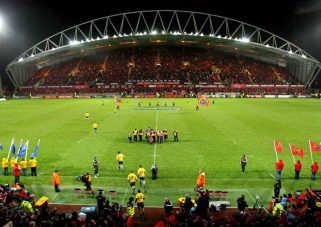