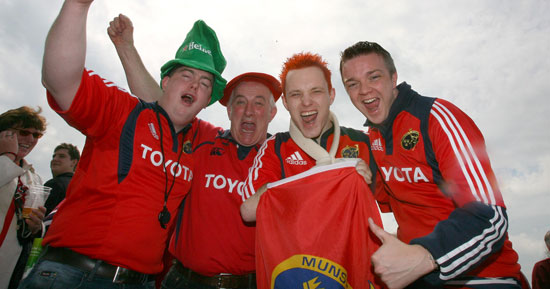 In the end it required total concentration and disregard for their bodies, throughout it required courage and commitment but in the end Munster qualified for their fourth Heineken Cup final with a agonisingly tense 18-16 win over Alan Gaffney’s Saracens at the Ricoh Arena in Coventry.

Munster led 15-7 at the break thanks to tries from Ronan O’Gara and Alan Quinlan after Fijian flyer Kameli Ratuvou had given Saracens the lead with a try besides the posts after just five minutes of play had elapsed.

However in a scrappy rain drenched second half two Glen Jackson penalties reduced the gap to just two points and reduced Munster to 14 with the sin binning of Rua Tipoki and 22 minutes of play remaining. O’Gara eased Munster nerves somewhat with a 63rd minute penalty but Jackson responded with a similar strike to set up the tensest of tense finishes.

The Ratovou score converted by Jackson gave way to a highly entertaining first half in which Munster had one try disallowed when Tipoki’s pass to Ian Dowling was adjudged to be fractionally forward. They might have had another try when Lifeimi Mafi backed himself with players outside and referee Nigel Owens needed to go ‘upstairs’ before deciding that O’Gara’s conversion of his own score had gone wide of the short uprights.

He made no mistake with his conversion of Quinlan’s try but his second half restart went directly into touch leading to a scrum back on half way that led to an early penalty for Jackson.

Within minutes of Tipoki being given yellow there were cards of a similar hue for props Nick Lloyd and Census Johnston leaving Saracens having to get Cobus Visagie (withdrawn earlier in favour of Johnston) to return to the fray. Following probable frantic microphone messages, Visagie suddenly developed a leg injury, Paul Gustard returned and the Saracens creaking scrum was saved by uncontested scrummage.