Munster Have It all To Do

Ireland’s Under 20 World Cup captain Niall Scannell could well make his senior Munster debut this evening after being drafted onto the replacements bench in place of Damien Varley.

Varley dislocated a finger in the course of the Clermont game but travelled with the squad to Parma with Scannell traveling as cover.

There’s a decidedly callow look to this Munster squad containing as it does now four Academy players and a first time pairing at this level at half back of Cathal Sheridan and JJ Hanrahan. They have played at A level most recently in the March fixture against Leinster at the Sports Bowl in UL, a game that saw a return to action for Paul O’Connell after a long lay-off through injury.

Zebre make no secret of their intentions. They have yet to win a game in this their inaugural season and believe this evening’s game affords them the ideal opportunity to claim a first victory to leave players and supporters in festive mood for the end of season party planned for the clubhouse afterwards.

A try from BJ Botha in the 65th minute – scored shortly after he’d replaced John Ryan – converted by Ian Keatley proved decisive in helping Munster to a 27-25 victory in the final RaboDirect PRO12 league game against Zebre in front of a 2,500 audience at Stadio XXV Aprile

At that stage Munster trailed by five following Daniel Halangahu's 59th minute strike and the Australian out-half had the opportunity to restore his side's lead seven minutes from time but he pulled his difficult effort from the right touchline across the face of the Munster posts.

In what was to prove a topsy turvey game played on a warm sunny evening, despite scoring two first half tries – from Johne Murphy and Paddy Butler – Munster found themsleves trailing 22-14 at the break. It looked certain to end up 19-14 as the clock ticked into overtime but then Munster were penalised a metre inside the Zebre half and up stepped Italian international Gonzalo Garcia to clip over the penalty with plenty to spare.

Halangahu gave the hosts, who were desperate for their first win of the season, the lead with a very early penalty but Munster showed good hands to send Murphy clear and he in turn showed good pace to get in at the right corner. Keatley, operating at centre with JJ Hanrahan at ten, added the extras.

Then it was Zebre's turn to apply pressure and after a TMO review Sinoti Sinoti was awarded the try with Halanghau missing from wide.

Four minutes later the impressive Paddy Butler crossed the whitewash and Murphy – who had a strong showing throughout – was unlucky not to score a second but Zebre seized the initiative with a Giovanbattista Venditti try and that late Garcia penalty.

Keatley reduced the deficit just after the restart and further still with a 58th minute penalty but Halangahu put five points between the sides with a penalty from the the restart before Botha heralded his arrival with the final try of the night after a good drive from his pack. 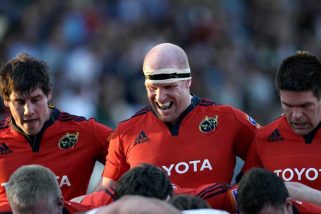 Munster Have It all To Do