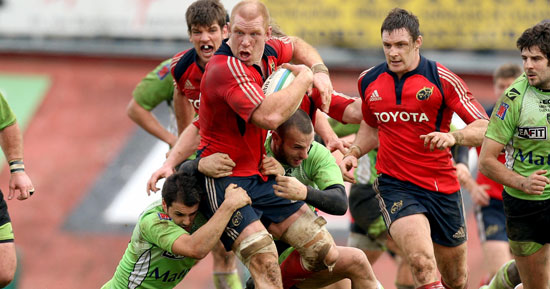 Tries from Tomas O’Leary, Lifeimi Mafi (2) and replacement Barry Murphy (2) helped Munster to a 39-13 victory over Montauban in Stade Sapiac.

They led by 10-6 at half time with a Tomas O’Leary try in the 22nd minute and although they extended that lead with a brace of Mafi tries, the first try after two minutes of the restart, had to withstand a Montauban fightback sparked by Scott Murray’s 58th minute try.

A Ronan O’Gara penalty in the 66th minute eased the tension somewhat for the large travelling support before Murphy sealed the issue with tries in the 68th minute and just at the end.

Montauban were first off the mark with Julian Audy penalties in the 10th and 17th minutes and buoyed by this lead they came in search of the try that would have set Munster a mountain to climb. However dogged defence kept the Munster line intact and O’Leary broke right from a scrum to open Munster’s account. Ronan O’Gara added the points and a 28th minute penalty to keep Munster noses in front, the half ending with Paul O’Connell and co hammering at the Montauban line in search of a crucial score.

It didn’t come then but within minutes of the restart it did when Mafi danced his way through the French defence and in the 54th minute he was on hand to take the scoring pass after O’Leary had carved open the Montauban defence.

Murray’s try left it wide open before O’Gara an important penalty and then two minutes after he had come on as a replacement for Keith Earls, Barry Murphy latched onto an O’Gara kick-through to score the bonus point try. With four minutes to go Murphy scored his second and Munster’s fifth to complete a satisfying afternoon for those immersed in the red of Munster.