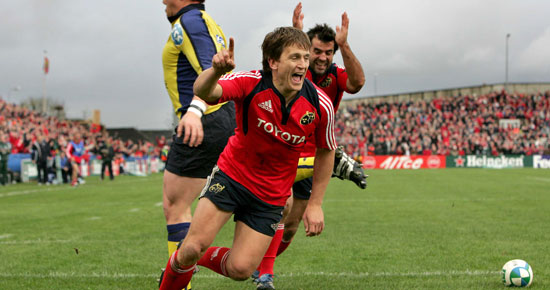 Five tries, two in the opening half that included one for Shaun Payne winning his 100th Munster cap, helped Munster to a bonus point 36-13 win over Clermont Auvergne on Sunday.

Rua Tipoki was the other first half try scorer, his coming in in jury time of the opening half to give the home side a 17-6 interval lead.

Eleven minutes into the second half Payne threw a lovely looping pass to send Brian Carney in on the right and the bonus try came from Alan Quinlan when he pounced on a loose ball close to the Auvergne line.

Right at the end Denis Leamy was on hand to give the scoring pass to Marcus Horan who went low to squeeze over by the right hand touch flag.

Munster took the lead in the seventh minute when O’Gara’s pinpoint crossfield kick was collected by Payne for the opening score. Seremia Bai and O’Gara swopped penalties and the Munster lead was cut to four just before the end of normal time when Bai kicked his second penalty.

In injury time however Tipoki gathered Leamy’s offload to score on the left and O’Gara’s conversion left Munster 17-6 up at half-time.

Eleven minutes into the second half the home side went further ahead when Payne’s clever pass gave Carney a clear run in but the deficit was reduced after Marius Joubert blocked Tipoki’s attempted clearance to score try after a bout of Clermont pressure.

O’Gara regularly drove the French back with excellent touch finds and in the 76th minute, from a lineout, Quinlan raced through onto a loose ball – Julien Malzieu making a total mess of a fly-kick attempt – to score the bonus point try.

Horan scored a fifth and replacement Paul Warwick looked sure to add a sixth when he broke clear from his own 22 but he was closed down short of the Clermont line .