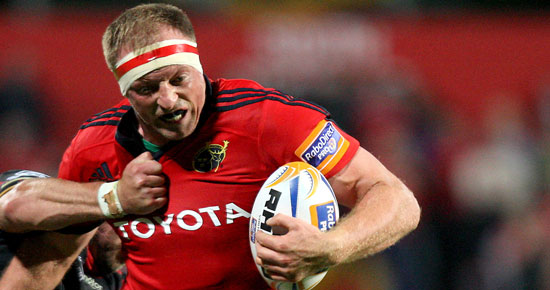 The squad went through their pre-match routines in their hotel grounds in brilliant sunshine that is set to remain for the rest of the day.

Like his Italian counterpart Tony McGahan has a few players back from international duty although Franco Smith's number is five while McGahan has three, Ronan O'Gara, Peter O'Mahony and Donnacha Ryan.

There is a youthful hue to McGahan's selection with Danny Barnes restored to the outside centre berth with Simon Zebo outside him and two more of the 'next generation' player Peter O'Mahony and Dave O'Callaghan on either side of the back-row.

Particular good news is the presence on the bench of Felix Jones whose first piece of action since last August came last weekend for Shannon and it's to be expected that Jones will get some game time later today.

Cardiff's win last night saw them jump ahead to fourth spot in the table but a win this afternoon can see Munster move back up to third.

It'll be no easy task, they lost here last year and this is their first game in a month. But if they can shake off ring rustiness early on they have the experience and youthful exuberance to win a tight game.

A 78th minute try from Simon Zebo, his second of the game, helped Munster to a 35-14 bonus point victory over Benetton Treviso in Stadio di Monigo.

It was a victory that moves Munster up to 3rd place in the table, four points behind Ospreys with a game in hand, and was impressive in that it was their first outing in almost six weeks.

Also impressive was the performace of Ronan O'Gara who struck the ball beautifully all day to pick up the Man of the Match accolade while Damien Varley, Peter O'Mahony, James Coughlan and Simon Zebo were others to catch the eye in what was an all round team effort.

Munster had the ideal start when Treviso ran a ball inside their own 22 but had an attempted kick charged down by Danny Barnes who collected to score. O'Gara landed the conversion for a seven point lead with less than four minutes gone.

Five minutes later a clever kick ahead from Zebo was collected by Barnes who then delayed his pass back to Zebo to perfection and the left wing twisted over for his try that needed the confirmation of the TMO.

Munster extended the lead when O'Gara landed his third successful effort after Treviso were penalised for a high tackle on Barnes and shortly after O'Gara chipped through for an alert Johne Murphy to score his side's third try, O'Gara once again on the money with the conversion.

The half ended with Treviso forcing a succession of five metre scrums but Munster's defence was immense until deep in added time after Mick O'Driscoll had departed to the sin-bin, when Fabio Semenzato squeezed over for Willem De Wall to convert.

Munster were reduced to 13 when Zebo saw yellow in the 47th minute and shortly after he departed Treviso's Cornel Van Zyl scored their second try in the right hand corner with De Wall landing the difficult conversion.

Two more O'Gara penalties saw the Munster lead go out to 30-14 towards the end of the third quarter but they had to wait until the very end for their bonus point victory when Scott Deasy, O'Gara's replacement minutes earlier, made the most of space on the left for Zebo to score in the corner. 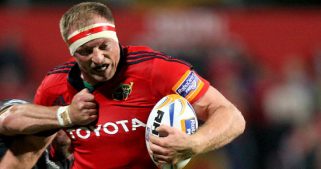