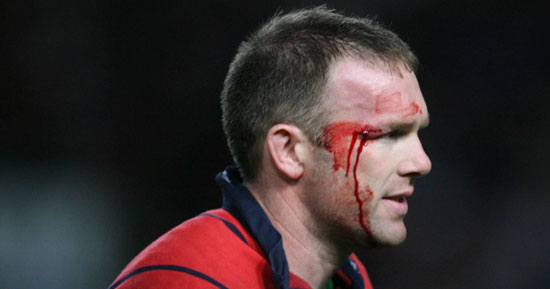 Tries from Brian O’Driscoll (2), Shane Horgan and Jamie Heaslip gave Leinster a fully deserved 27-20 victory over Munster in front of a 27,000+ crowd at Lansdowne Road.

It was a cracking contest from start to finish and it was a game that Munster looked poised to win after they’d scored a late first half try to trail 17-10. However, it was the team in blue who rolled up their sleeves in the second and – with the crowd getting behind them – defended like dervishes and outscored the European champions two tries to one to claim a bonus point victory.

In truth Munster’s second half performance was way below par but they will be cheered by the late try that earned them a bonus point and the appearance from the bench in the 45th minute of Barry Murphy, back o the field after sustaining a horrific ankle injury last March. Murphy’s first entrance was as a temporary replacement for John Kelly and he came back on for Ian Dowling in the 54th minute. At that stage Munster trailed 22-13 and looked well placed to repeat their success of last April but they just could not break down a resolute Leinster defence nor could they take their chances as clinically as Leinster did when they got into the Munster 22.

Ronan O’Gara had given Munster a three nil lead with a 4th minute penalty but they suffered a setback five minutes later when Alan Quinlan had to be replaced after he injured his hamstring. Mind you, having a replacement of the calibre of Denis Leamy is more than comforting but he had hardly warmed to his task when the Leinster backs stretched their legs to send the hugely impressive and influential O’Driscoll in for the first of his two tries.

At that stage Leinster were down to 14 after Ronnie McCormack had been sin-binned for needlessly shoeing Paul O’Connell and the seat McCormack occupied in his 10 minute ‘rest’ was hardly cold before Felipe Contepomi’s bum was resting there, the Argentine yellow-carded for a punch on Donncha O’Callaghan. For some strange reason Contepomi protested his innocence when the general consensus was that his action merited red rather than yellow. How the touch judge could have advised referee Simon McDowell otherwise is a mystery.

When Contepomi returned he orchestrated Leinster’s second try, added the conversion and boomed over a huge penalty to give Leinster a commanding 17-3 lead.

Munster’s responded with that Wallace try which O’Gara converted superbly to leave Munster in pole position to go on and win the game in the second half with the wind in their backs. However it was Leinster who put the wind in their sail to claim a huge morale-boosting victory.