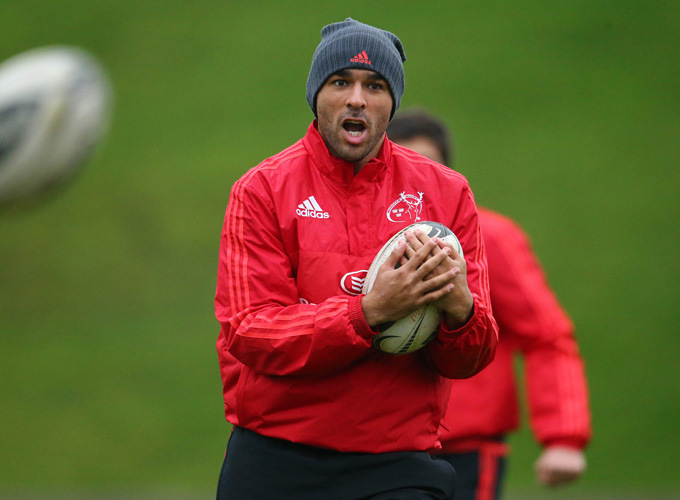 Munster Head Coach Anthony Foley makes three changes from the side that defeated Treviso for tomorrow’s return to Thomond Park where Munster face Newport-Gwent Dragons in Round 17 of the competition – KO 7.35pm

Following his 6 Nations involvement against England in Twickenham last weekend, Simon Zebo has been made available to the province and will make his first appearance in red since January, while Stephen Archer also makes a welcome return to the matchday squad after successfully overcoming a neck injury that has kept him sidelined since October. Should he make an appearance from the bench, the tighthead will win his 100th Munster cap.

The first of two changes to the pack sees hooker Niall Scannell re-join Dave Kilcoyne and John Ryan in the front row. Mark Chisholm and captain Billy Holland continue in the second row while in the back row, Tommy O’Donnell returns at 7 with Dave O’Callaghan and Jack O’Donoghue switching to 6 and 8 respectively.

Simon Zebo starts on the left wing in an otherwise unchanged backline. Duncan Williams and Ian Keatley form the half-back partnership and Rory Scannell makes his tenth consecutive start at inside centre in partnering Francis Saili in the midfield.

If called upon from the bench, recent long-term injury returnee Johnny Holland will make his first appearance of the season.

In other news, this week saw Mario Sagario called up to the Uruguayan international squad for the Americas Rugby Championship. The Munster tighthead will start against the USA in Montevideo tomorrow.

Tickets can be purchased online here, from the Munster Rugby ticket Offices at Irish Independent Park and Thomond Park, or by calling 0818 719 300. 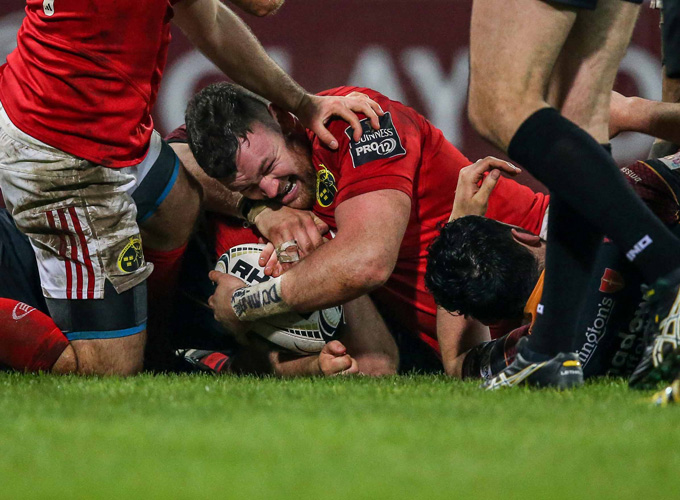 Munster tonight recorded a bonus point win over Newport-Gwent Dragons in Round 17 of the Guinness PRO12 at Thomond Park. Dave Kilcoyne bagged his second brace of tries in three games with Rory Scannell and James Cronin also crossing the whitewash.

Despite a 26-5 scoreline, Anthony Foley’s charges didn’t have it all their own way and this performance was as much about defence as it was attack with Munster overcoming a second half onslaught from Dragons. It’s testament to the host’s good work in defence that all the Welshmen could muster was a solitary try.

Dragons laid down a statement of intent from the off, opting for the corner with a kickable penalty in just the second minute of the game. It would be to no avail however as a good read and steal from Tommy O’Donnell quelled the opening threat.

Before long the Thomond faithful were given something to get behind as Francis Saili made a searing break, showcasing wonderful footwork and pace to bring Munster deep into the Dragons 22. From there the province continued to make good yards through the phases but unfortunately it was an attack that both started and ended with Saili after the New Zealander knocked on in a double tackle within metres of the line.

Munster’s next serious attack came on 17 minutes and this one paid better dividends. Coming from full-back, Andrew Conway danced inside two defenders and offloaded to the returning Simon Zebo on his left who was brought to ground on the 5 metre line. From there, patient phase play went from left to right and back again before Darren Sweetnam broke the five metre deadlock. The winger was held up just short but quick recycling saw Dave Kilcoyne awarded Munster’s opening try – after consultation with the TMO – when he picked and went a close range.

A number of knock-ons as the half progressed won’t have pleased Head Coach Foley, especially as the unforced errors gifted Dragons easy possession off of which they looked ever threatening, particularly when employing their offloading game.

A little touch of lady luck came the way of Munster for their second try. Despite losing their own attacking lineout on the 5 metre line, loose passing from Dragons allowed Jack O’Donoghue regain possession and once again the men in red pounded the visiting defence close to the line. Both phase play and the maul was used to suck in defenders and with the overlap in place Munster went wide where centre Rory Scannell cut between two defenders in touching down.

Ian Keatley added the conversion and Munster headed for the interval 12-0 to the good.

Continuing from where they left off, soon after the restart Munster were out to a 19-0 lead when they again used their physical prowess deep in the Dragons 22. A penalty for a high tackle allowed Keatley put his forwards within five metres of the try line and with the lineout successfully secured, Kilcoyne would cross for his second after a number of phases.

As Munster went in search of the try bonus point, Dragons for their part kicked into gear, helped in no small way by replacement scrum half Sarel Pretorius. Munster struggled to cope as the South African sped up the Dragons attack and with the resultant gaps in defence, Hallam Amos made it 19-5 on 47 minutes.

With momentum swinging their way, the Welsh outfit remained camped in the Munster 22 for what seemed like an eternity – in reality around 25 minutes – but the Munster defence held firm and resolute throughout. Replacement loosehead James Cronin did exceptionally well in placing his body under the ball when Dragons eventually found a way through – the TMO correctly ruling that the ball was held up.

When back in possession, Munster initially lacked a little composure in attempting to secure the bonus point try, losing their own attacking 5 metre lineout and allowing Dragons to neutralise their maul all too easily in the subsequent attack.

However, determined to get the job done, the men in red found another gear in the dying minutes of the game. Replacement David Johnston initiated the attack as he countered from his own half and the academy full-back remained involved as he and Cronin – amongst others – persistently picked and went, making good headway in each collision. It was just deserves that Cronin was the one to touch down.

Playing to the very end, a series of scintillating offloads nearly saw Munster cross for a fifth try. It wasn’t to be the dream ending however and instead, turnover ball saw Foley’s men end the game on their own try line as Dragons looked to put a bit more respectability on the scoreboard.

In avenging last December’s comprehensive defeat in Rodney Parade, as it had done for most of the game, the Munster defence remained impenetrable and the hosts maintained their 21 point winning margin.

PRO12 Round 17 round-up: The results sees Munster climb to fifth on the PRO12 table and lie within four points of fourth placed Ulster. Rory Scannell made his tenth consecutive start at inside centre and scored his first try for the province. He was one of two academy players involved in tonight’s game alongside David Johnston. Back-row Dave O'Callaghan was to the fore in Munster's excellent work at the breakdown and was duly awarded the man-of-the-match accolade.

In overcoming a neck injury that kept him sidelined since October, Stephen Archer came on as a replacement to win his 100th cap for the province. Tonight also saw replacement out-half Johnny Holland return from a long term hamstring injury to make his first PRO12 appearance since November 2014. 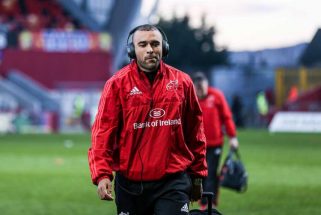 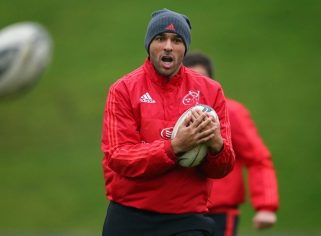