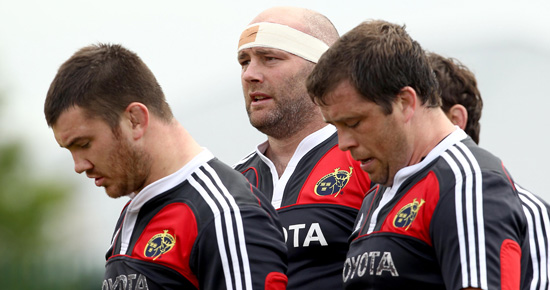 If there’s one thing that Munster and Ospreys have in common this evening it’s the pressure thats on them to perform and earn a place in the Magners Grand Final on May 28th.

By their own admission neither sides have produced the type of performance they expect of themselves and though Munster have been a model of consistency throughout this Magners campaign, they are fully aware that ultimately that campaign will be judged, initially, on tonight's outcome.

For their part, Ospreys despite being accused of underperforming have scrambled their way into the position to retain a title they won last season thanks then to wins on the road in Ravenhill, here in Limerick and finally in the RDS. Now they're just 80 minutes away from a victory that would produce a repeat of last year's final

And they travel with a side that even shy of Lee Byrne, Mike Phillips and Shane Williams, can boast 12 international – four of those Lions – in the starting line-up and two former All Blacks, Marty Holah and Jerry Collins on the bench, the latter possibly fortunate to be making the trip having been yellow carded for that head high tackle on Felix Jones in the dying moments of the game at the Liberty three weeks ago.

For Munster besides the carrot of a home semi final against arch rivals Leinster – 18-3 winners last night against Ulster – they're the player's stated aim to make amends for a disappointing performance last time they occupied a big stage, here in Thomond Park three weeks ago.

They've led this League since the very early rounds, wound up with a 13 point cushion and will not want to see all that hard work end this evening.

However, they face the side they would least have liked of those left in contention for that final spot. Victory in the Liberty at the end of April seemed certain to remove Ospreys from the equation but they're back and probably with a grievance feeling they've a score to settle.

The pressure on both sides will be intense. The one that handles it better will go on to face probably the European champions in the final. 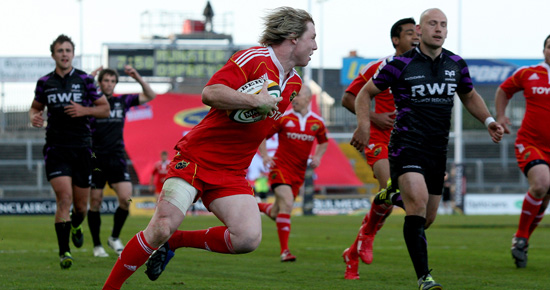 Danny Barnes marked what was just his fourth start for Munster, his third of the season, with a brace of tries to help Munster to a nervy though totally deserved 18-11 win over Ospreys in front of a 13,000+ crowd at Thomond Park Stadium in the semi final of the Magners League.

It was a victory that sets up what departing sponsors Magners would have wanted, a Grand Final featuring the runaway League winners and their great rivals and runners up in the league proper, Leinster.

It was a game that Munster should have put away long before a finish that saw the visitors play their most threatening rugby in added time as they sought to score the try that might have taken this game to extra time.

It was a scenario that should never have been considered but came about after Richard Fussell had scored a late try to offer the title the faintest glimmer of hope at the end of a game dominated by Munster.

And it left them defending desperately albeit in the Ospreys half of the field as tommy Bowe, Fussell, Andrew Bishop and Jonathan Thomas tried desperately to carve out an opening.

But the Munster line held firm and they now face the prospect of entertaining what could be the Heineken Cup champions in Limerick in a fortnight's time.

Ospreys played with a stiff breeze at their backs in the opening half but the signs for them were ominous from early on when the Munster scrum stamped it's authority at the very first first put-in and James Hook missed a drop goal after his side had claimed possession from a Munster overthrow at the lineout on their own 22.

The home side coughed up two try scoring opportunities in that first half, first Keith Earls losing the ball forward and then Nikki Walker managing to cut out a scoring pass from Lifeimi Mafi to an unopposed Doug Howlett.

With less than minutes to go Munster eventually created the space for Felix Jones and Howlett to send Barnes haring for the line.

Biggar knocked over a penalty from distance and Munster went in 8-3 in front.

It was more of the same upfront in the second half, the red 8 shredding their opposites time after time and David Wallace who had a particularly and effective evening looked sure to score on two occasion, nudging the the ball forward first and then denied by the TMO.

O'Gara and Biggar swopped penalties and with the game still delicately balanced, Barnes was up quick to block down a Fussell clearance to gather and score in the 56th minute.

Munster probably should have closed it out but failed to do so to ensure the little bit of drama at the finish but in the end all connected with the Ospreys graciously conceded the spoils went where they were richly deserved. 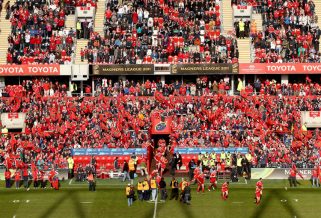 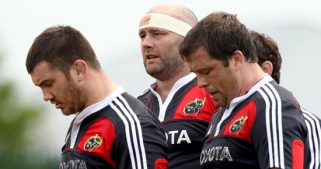