Back To Basics Puts Munster Back In Business 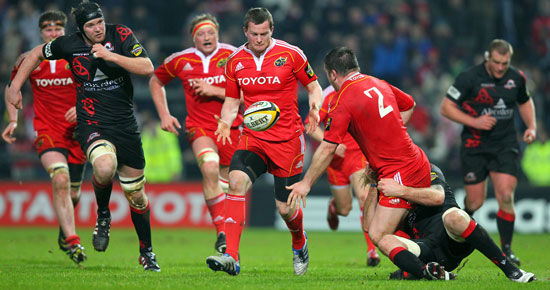 A return to getting the basics right was what players and management attributed Munster’s 23-13 win over Edinburgh at Thomond Park Stadium in front of an 11,246 crowd in their Round 15 Magners League game.

A dominant scrum and just two lineout losses from 19 throw-ins gave them the ideal platform to launch their backs which they did to good effect, scoring two tries and denied a third by the finger tips of scrum half Greig Laidlaw.

There was also a try from the man who made all the news in the run up to the game, Tony Buckley, when he announced his intention to leave Munster at the end of the season. In his statement announcing the decision, the big genial tight-head stated that his immediate focus was on helping Munster achieve their goals and on Friday he was true to his word, delivering arguably his best performance of the season. He performed his primary function superbly, saved Munster's blushes on several occasions at the tail of the line-out and showed strength and no shortage of skill when scoring the 15th minute try at the corner flag.

Coughlan, one of the few along with O'Driscoll, who emerged from the Treviso defeat with credit, deserved his award although it would have been a close call ahead of O'Driscoll who rarely has a bad game, O'Gara who kicked the corners and controlled the tempo and Mafi who had one of his best this season.

The Tongan was central to both of Howlett's tries and this first time centre pairing with Paul Warwick worked a treat, two midfield breaks ending in two tries, the first at a crucial stage, injury time of the first half and the second when Munster held a precarious three point lead with 15 minutes remaining.

That second was a gem. Mafi making the cut, Johne Murphy up in support and throwing the perfect pass inside for Howlett to romp over.

Murphy was denied a try just after O'Gara had kicked Munster in front with a 45th minute penalty, when he raced onto a trademark O'Gara dink-through only to be denied by Laidlaw who just managed to get downward pressure right on the whitewash.

Edinburgh looked threatening right throughout with Scott MacLeod providing his lively backs with quality lineout ball and Netani Talei and Ross Rennie more than willing to test Munster's defence. In addition, they had in Tim Visser, a player with serious gas and it was his surge in the 31st minute that led to Geoff Cross's try under the posts.

Paterson's straight-forward conversion left Edinburgh in front and had they shown a little more composure minutes later they might have extended that lead, instead butchering an opportunity in the left hand corner at the Ballynanty end.

It seemed the visitors would take a 13-8 lead into the break but what could only be called 'messing' on their own line-out throw, led to a short penalty that Peter Stringer took quickly for Mafi to break and then send Howlett scorching for the corner. Laidlaw did manage to get to the him but the wily former All Black took his tackle allowing momentum carry them over for the touchdown. 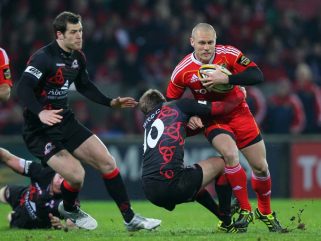