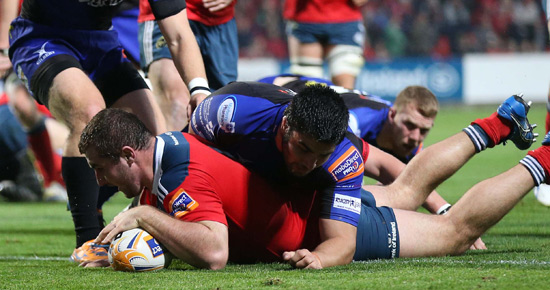 A dominant forward display was the platform for a convincing 23-9 victory for Munster against Newport Gwent Dragons at a blustery Musgrave Park on Saturday night.

The win came courtesy of 13 points from the boot of JJ Hanrahan and tries from Peter O’Mahony and James Cronin with Munster moving up to third in the RaboDirect PRO12 table.

The win saw the return of Paul O’Connell who came on for the last half hour for his first appearance since he broke his arm in the first Lions test against Australia in Brisbane during the summer.

Munster made 12 changes to the side that were beaten in Italy by Treviso last week. Johne Murphy, Andrew Conway, Ivan Dineen, JJ Hanrahan and Cathal Sheridan came into the backline. James Cronin, Damien Varley and John Ryan came in to a new look front row with Donncha O’Callaghan, Dave Foley, Sean Dougall and Paddy Butler also coming into the pack.

Newport Gwent Dragons also made changes to the side that recorded an impressive win over Scarlets at Rodney Parade last weekend with Toby Faletau the most notable absentee.

Rob Penney’s side went ahead in the seventh minute when Hanrahan slotted a penalty over from the Dragons ten metre line after Damien Varley forced Francisco Chaparro to hold on after the Argentine prop was tackled inside his own half.

The Dragons hit back almost immediately when Munster captain Peter O’Mahony was pinged for not releasing and Australian-born Italian international Kristopher Burton made it 3-3.

Munster were back in front after 18 minutes thanks to some impressive work from the forwards. First they forced a penalty from a Dragons scrum and then they brought a rolling maul deep into the Dragons 22, the Welsh side were eventually caught offside with Hanrahan kicking his second penalty to make it 6-3.

Once again, the lead didn’t last long and Burton made it 6-6 with ease after the home side were penalised for going into the ruck off their feet.

Hanrahan almost restored the lead just past the 20 minute mark when the Dragons were penalised for accidental offside but his penalty drited just wide.

The first try finally arrived in the 35th minute when Ivan Dineen showed great strength to break through a few tackles inside the Dragons 22, when he was eventually dragged down the ball was recycled quickly and Cathal Sheridan showed great awareness to pop a perfect pass to onrushing prop James Cronin who powered his way over from close range.

Hanrahan easily kicked the conversion to make it 13-6.

This time there was no instant response from the Welsh side and Munster went in at the break with a deserved seven point lead.

The Dragons scored the first points of the second half after a Munster infringement at the breakdown gave Burton the opportunity to close the gap and his penalty from near halfway just crept over the bar to make it 13-9.

Moments later the Dragons were down to 14 when their captain Andrew Coombs was sin-binned for what looked like a stamp on the head of Damien Varley.

They were soon down to 13 after Jevon Groves was adjudged to have intentionally brought down a Munster rolling maul that was inching ominously towards the Dragons line.

Munster’s second try followed soon after as they made the two man advantage count with O’Mahony throwing a dummy before blasting his way over the line.

Hanrahan was spot on once again with the conversion to make it 20-9.

The biggest cheer of the night was reserved for the arrival of Paul O’Connell in the 51st minute and Munster’s lead was extended in the 62nd minute when Hanrahan was clinical in punishing a Dragons offside to make it 23-9.

With the win secure, Munster pushed to score two more tries to get the bonus point but it was the visitors who finished stronger but the Munster defence withstood some late pressure to secure a comfortable win. 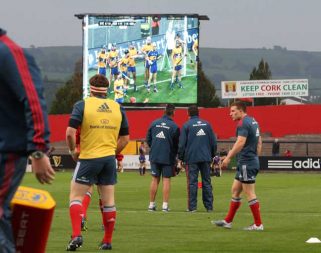