The boy brigade is led by just turned twenty year old JJ Hanrahan making his first start for the side in a backline that if you exclude the experienced Casey Laulala has an average age of 23.

Up front that theme is continued with a front row of Dave Kilcoyne, Mike Sherry and Stephen Archer who between them have accumulated almost the same number of caps as the five outside backs while the average age of the backrow – Dave O'Callaghan, Paddy Butler, Peter O'Mahony – is just 22 years.

It all makes for very positive reading and particularly so when you consider that six of the match day squad are ear-marked for national duty in November with at least two more likely to join them. However, be that as it may the first order of business for them is Zebre and getting their RaboDirect PRO12 challenge back on track after two defeats on the bounce.

Those reversals came in against European champions in Dublin and League champions in Swansea and in the circumstances might be considered to some degree understandable though never acceptable to the Munster mindset.

This evening there's only one result that will suffice and on top of that, the way it's fashioned will also come under scrutiny. But there's been enough evidence to show that this group are capable of accepting the responsibility vested in them and that they can turn this into a Halloween the Italians will want to forget.

Another Late Show For The Bonus

There were a lot of similarites between this week’s 29-3 RaboDirect PRO12 victory over Zebre and last week’s Heineken Cup win against Edinburgh.

This time round Munster reprised their opening half performance, managed just one score less and once again left it late to claim the bonus point against opponents marginally superior to those who had been in Thomond Park five days earlier.

In mitigation it must be said there were nine changes in personnel and credit too to the Italians who in the first half particularly played with loads of adventure and commitment.

It was three points apiece after an error strewn first half that had the 8000+ attendance gripped not by the quality but rather the icy cold. But maybe because of second half happenings last Sunday, there was the expectation that the banal would be replaced by the brilliant and so it proved.

Served better quality and more consistent ball, Ian Keatley set his young backline free at every opportunity and was rewarded with four quality tries, two from JJ Hanrahan who was making his first start for Munster. The Castleisland man earned the Man of the Match award but he must have been pushed close for that accolade by prop Stephen Archer who had a huge influence on proceedings.

Hanrahan's first try owed much to pace, the second to a poacher's instinct as he latched onto a lovely dink-through by Keatley for the try that sealed the outcome.

Before that it was a typical mazy Felix Jones run that earned try number two under the posts and arguably the best try of the night came from Luke O'Dea with just four minutes to run, his second try in two starts and his sixth in eight Rabo starts.

Speaking about that first half Rob Penney said. "I think we just lacked a bit of rhythm. I think some unusual decisions probably just made us stutter a bit. When we had opportunities to play we got a couple of calls that were a bit unique. And we didn't help ourselves. So a combination of those two things worked against us."

There was a very discernible pep to Munster's step from the restart and they flung the ball wide at every opportunity.

Once again Donncha O'Callaghan made good yardage down the East Stand touchline and when the ball was spread wide and right, Hanrahan took advantage of the distraction that was O'Dea to step his marker for the try.

Ten minutes later, it was Jones who ghosted through leaving Keatley with a tap-over and Keatley turned provider eleven minutes on for Hanrahan to score his second.

O'Dea's bonus try was a gem and the right wing very nearly put Hanrahan away for his hat-trick with the last move of the game. 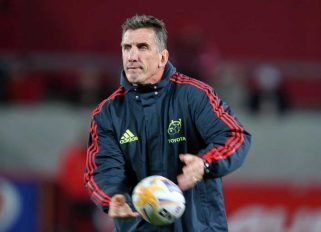