All Right On The Night 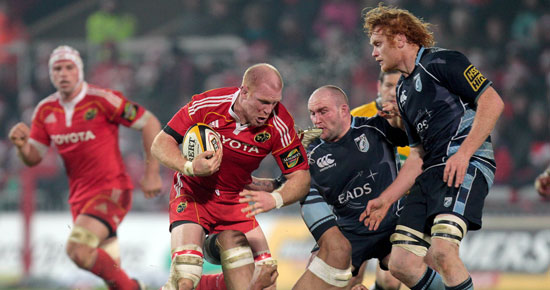 There was just a little over 56 minutes gone last night when the biggest roar of the night rang out to greet Paul O’Connell’s return to Munster action after nearly nine months on the sidelines.

"That's the way to make your entrance." said a clearly delighted Mick Galwey as O'Connell rose majestically to take a lineout ball just seconds after he'd joined the fray as replacement for Donncha O'Callaghan who once again had worked himself to the bone while he was on the pitch.

O'Connell took up his station alongside Mick O'Driscoll as Munster held a less than comfortable 13-6 lead against a Cardiff Blues side who made life difficult throughout the eighty plus minutes. Despite dominating for long periods in the opening half Munster trailed 6-0 after Dan Parks had landed penalties in the 3rd and 33rd minutes and it wasn't until injury time of the opening half that Ronan O'Gara opened Munster's account with a penalty for a three point interval deficit.

The only try of the night came courtesy of Alan Quinlan in the 48th minute when he stretched to score and O'Gara's conversion was followed four minutes later by a penalty for a seven point cushion.

Parks made it a one score deficit with a penalty on the hour and Munster had to be brave and committed in defence to thwart an increasingly threatening Blues outfit.

Although they gave their supporters some anxious moments, as the freezing fog descended, and were forced to defend a Blues lineout deep in their 22, it ended in a victory that sees them remain top of the League four points clear of Scarlets and now their attention switches to Heineken Cup fare and the back-to-back meetings with Ospreys. 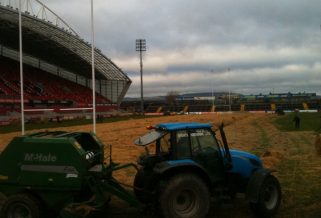