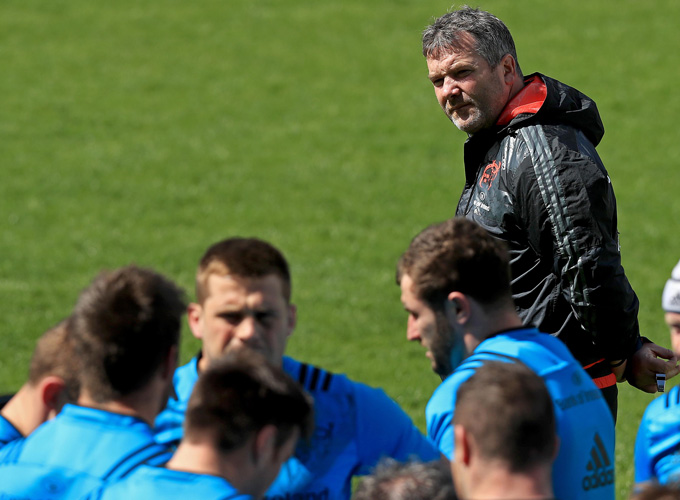 For the first time this season Head Coach Anthony Foley names an unchanged side as Munster bid to secure Champions Cup qualification in Round 22 of the Guinness PRO12. Munster welcome Scarlets to Thomond Park tomorrow for a 3pm kick-off.

The game marks a milestone in the career of Dave Kilcoyne who will win his 100th cap for the province when starting alongside Niall Scannell and Stephen Archer in the front row.

Dave Foley and Billy Holland continue in the second row with the back row trio of Dave O’Callaghan, Tommy O’Donnell and captain CJ Stander – this week historically named IRUPA Players’ Player of the Year and Supporters' Player of the Year – again completing the pack.

Conor Murray and Johnny Holland take charge at half back with Rory Scannell in line to make his final appearance as an academy player. The centre who progresses to the senior squad in July will make his 20th PRO12 appearance of the season in starting alongside Francis Saili in midfield.

Keith Earls and Andrew Conway are again named on the wings with this season’s joint top try scorer Simon Zebo – alongside Mike Sherry – remaining at full-back.

This game will be televised on S4C. 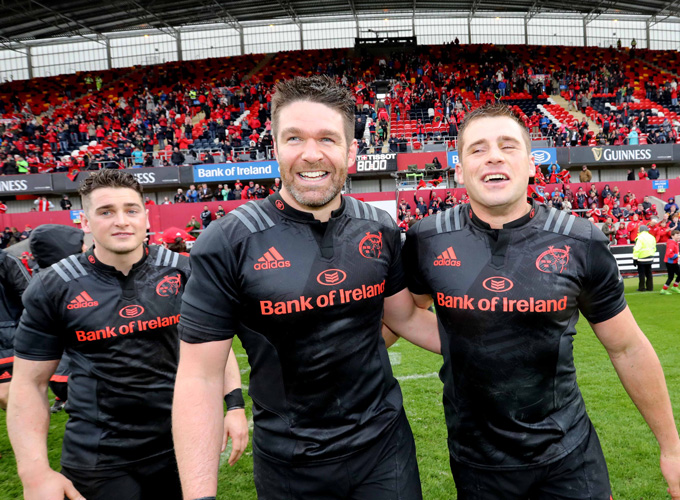 Munster made certain of Champions Cup rugby next season by recording the their second bonus point win in as many games. In total Munster ran in five tries in overcoming Scarlets on a 31-15 scoreline at Thomond Park Stadium today.

It was all Scarlets in the opening ten minutes, Munster’s cause not aided by the loss of Niall Scannell and Tommy O’Donnell to injury, and wave after wave of attack required a huge defensive effort from the hosts – which is what was delivered.

Neutralising sustained periods of attack in forcing knock-ons and winning crucial turnovers on the ground, the pressure eventually told and Scarlets were handed their first shot at goal when Munster held on in attempting to exit their half.

Their lead was short lived however as Munster soon turned defence into attack where, from turnover ball, Francis Saili kicked behind the Scarlets defence which was up flat. Keith Earls claimed the perfectly weighted kick and stepped inside the cover defence before finding Saili again who found himself in open space on the half way line and there was no catching the New Zealander– try Munster on 12 minutes with Johnny Holland adding the easy conversion for a 7-3 lead.

Scarlets did exploit an overlap down the left flank to touch down on 18 minutes, but consultation with the TMO correctly highlighted that the final pass was forward. However Scarlets would ulltimatley leave Munster territory with three points as lack of control from the Munstermen when trying to exit the 22 handed Shingler another shot at goal.

An excellent Dave O’Callaghan break that brought Munster into opposition territory was the catalyst for another fruitful Munster attack. Kicking a penalty to the corner, Munster went through the phases with Rory Scannell eventually exploiting Scarlets lack of defensive numbers out left on 22 minutes.

Holland’s conversion pushed Munster out to a 14-6 lead.

Scarlets would have the final say of the half when Munster illegally bought down a maul and were pinged for holding on – Shingler bisecting the posts on both occasions and reducing the deficit to just two points before the interval.

An excellent hit from Keith Earls upon the restart saw Scarlets scramble to maintain possession, going off their feet when doing so and handing a penalty to the hosts – but Holland’s attempt was right of the posts.

A probing kick from Scarlets followed by a misfiring Munster defensive lineout placed the province under all sorts of unwelcome pressure, even requiring referee Nigel Owens to consult with the TMO for a potential penalty-try when Shingler looked like he might have been impeded when attempting to claim his own kick-chase. The TMO adjudged Munster had no case to answer and Scarlets left the Munster 22 scoreless.

Munster’s third try came when they again turned defence into attack. Poor handling by Scarlets down the left wing saw Rory Scannell pounce on the loose ball and offload beautifully in the tackle for replacement Ronan O’Mahony who darted to the tryline – Holland uncharacteristically off target again with the extras.

There was little breathing room for Munster, as on 65 minutes, a scrum penalty reduced the deficit to four points – 19-15 – yet ironically for Scarlets, it was a scrum penalty against them that them placed Munster back in the corner and off a dominant lineout maul, captain CJ Stander broke to touch down for the bonus point try on 69 minutes.

Despite Holland pushing the conversion right, Munster at least had the buffer of more than a converted try.

With no hint of complacency Munster remained at 100% through to the very end, retaining the majority of possession staying camped inside the Scarlets 22. And it was game, set and match to the hosts when Rory Scannell crossed for his second try with 80 minutes played.

Holland’s conversion would be the final action of the game, Munster deserved 31-15 winners in front of strong home support at Thomond Park.

For the first time this season Anthony Foley named an unchanged side for the weekend’s action with Dave Kilcoyne winning his 100th cap for the province.

On the academy front, Rory Scannell made his last appearance as an academy player. The centre progresses to the senior squad in July and made 20 appearances in this season’s league.

Conor Murray spoke to MunsterRugby.ie after the game… 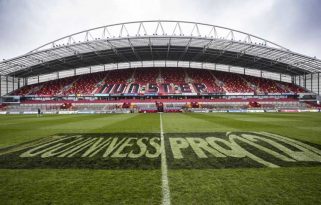 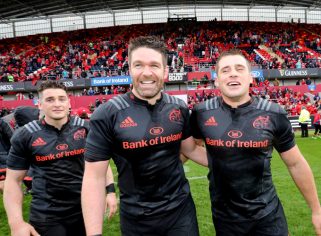