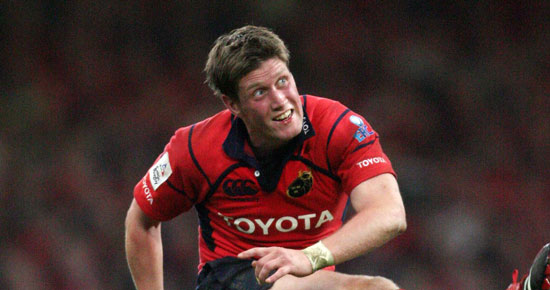 "Hi Boys, that’s us in the final," chortled an Ulster supporter in a Limerick hotel bar, as the final whistle sounded in Murrayfield yesterday afternoon to signal a first ever Heineken Cup semi final for Edinburgh, against the winners of this afternoon’s clash at Thomond Park Stadium.

Of course it was in jest. Or maybe they may been particularly prescient but in truth there is a huge air of confidence about the travelling support from the north who expect nothing less than victory at Thomond Park Stadium.

Not only will today's winners know who they’re playing, they’ll also know where, and the scramble for tickets will already have begun although the organisers and indeed the stadium officials, though they won’t admit it, will be hoping for a Munster win if they’re to have any chance of a bumper crowd.

The clash today promises to be a truly gripping affair. All the talk is of us Ulster momentum, their performance last time out as opposed to Munster's and of course the fact that Stephen Ferris has been named in the starting XV.

There's an awful lot expected of Ferris who is carrying an ankle injury and has to be rated doubtful to last the 80. There may also be a lot being read into Ulster's last performance although there's no doubting the credentials of a side who have scored 49 League tries to date.

So today then defence will be key and again going back to Rabo form Munster's is one of the meanest. And if there was one aspect of their display against Leinster that may have pleased it was the way they kept thir line intact.

The return ot Paul O'Connell, Donnacha Ryan and Conor Murray is an obvious plus. There's first Cup starts for Felix Jones, Mike Sherry and Tommy O'Donnell and there's the memory of that game in Milton Keynes to remind us of what this Munster team is capable of.

And let there be no doubting the merit of Ulster's victory, one that gives them a first semi-final appearance since their successful title winning campaign.

The 1999 champions with the wind at their backs led by 19 points at one stage in the opening half but ended the half just nine points clear after Simon Zebo opened the Munster account and Ronan O'Gara added the extras and an added time penalty.

But that sadly, was really as good as it got for the home side who won the second half 6-3 but came up well short in terms of closing a deal that looked like was theirs to deal when O'Gara reduced the deficit to six with only 8 minutes of the second half gone.

And again after Ruan Pienaar had goaled his fifth successful kick ten minutes later, victory looked well within Munster's compass as O'Gara once again cut the deficit to six and twenty minutes still left to play.

However, even though the visitors looked somewhat out on their feet, to their great credit, they still managed to put in the tackles, continued to deny Munster quick ball and forced the errors that were to stymie momentum. In the end they'd forced Munster into their own 22 where Ian Humphreys was narrowly wide with a drop goal and Pienaar, most surprisingly, drilled a penalty wide of the right upright.

Pienaar slotted two penalties from inside his own half to push Ulster six points clear and eleven minutes of the game played. Then, five minutes later Humphreys and Stefan Terblanche worked their magic to put Craig Gilroy in space. He stepped outside Denis Hurley and evaded Simon Zebo and Felix Jones to score close to the posts.

Munster responded with a few close in rumbles but were denied any return and when Ulster went back downtown Humphreys fired over a drop goal.

Stung into response, Munster probed right, Peter O'Mahony and BJ Botha did well to keep the ball in play and when they went left, good hands from O'Gara, Lifeimi Mafi and Keith Earls put Zebo in at the corner.

O'Gara landed a great conversion into the wind and an even better penalty moments later that would have sent Munster in at the break in good heart and with the wind in their backs for the second half.

Ulster started the second half with 14 players, Chris Henry binned in the 36th minute, and found their lead cut to six when O'Gara goaled again after John Afoa was penalised.

Two trademark O'Gara touch-finds, first right then left, established them in the Ulster 22 and the expectation was that they'd go 'old school', play for position and let nature take it's course.

But Ulster were having none of it. Their defence in close was outstanding and Munster's attack out wide was dealt with comfortably.

The went back nine in front when Munster were penalised just inside halfway for wheeling a scrum. It looked a very harsh decision but that mattered not a whit to Pienaar who fired over the resultant penalty.

O'Gara converted his fourth successful effort when man of the match Stephen Ferris was done for a high tackle on James Coughlan. Coughlan put in a tremendous effort over the 80+ minutes.

And remarkably that was that in terms of Munster scoring. O'Gara had one more shot, it looked an ambitious decision, when Munster were awarded a penalty close to the East Stand touchline on half way and it was Ulster who had the better opportunity to close it out, first with the Humphreys drop goal and then that effort from the normally ultra reliable Pienaar.

And so it ended with Munster desperately trying to get back downfield, their efforts denied by uncompromising and very capable Ulster defence.

Afterwards, a clearly dejected captain Paul O'Connell left a devastated dressing room to address the media. He identified the opening half hour as crucial to the outcome. "I don’t know if we’ve ever started a game like that with all the time I’ve been involved in Munster, to go down that much in such a short period of time. It left us with so much to do and gave them such belief." he said.

However he also admitted that Munster still had the opportunity and the time to turn things around. "Yeh, we had enough territory and ball to do it so to just score one try from all that was disappointing.

"We probably could have done it but we weren’t accurate enough with the ball. 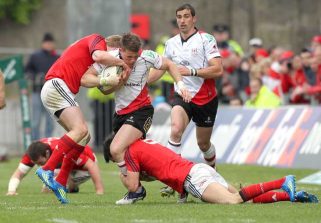