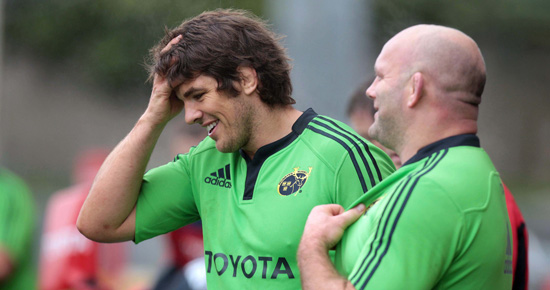 On the face of it, tonight’s RaboDirect PRO12 fixture in Musgrave Park (8.30) looks a pretty straight forward affair for Munster who with their returning internationals, will be raging hot favourites to get back to winning ways.

Four from six wins in the opening phase of the competition probably represented a fair return for Munster's effort while in the same period Aironi managed just one win, at home to Edinburgh.

Perugini and Geldenhuys are named on the bench, so too are Tito Tebaldi and Giulio Toniolatti which means that there'll be plenty left in the Italian tank as the game enters the crucial third quarter.

Last times the sides met here in Musgrave Park, it was still all to play for going into the second half when Perugini got his marching orders and Munster capitalised. We also know that despite their lowly League position, only three sides have scored more tries so far and given the presence of Orquera, Masi and Toniolatti and Tebaldi when inevitably introduced, expect them to run at Munster at every opportunity.

The captain's armband reverts to Paul O'Connell but the man who has worn it in his absence, Peter O'Mahony, is retained in the back row, preferred on this occasion for the number 7 shirt ahead of Niall Ronan (bench) and Tommy O'Donnell.

O'Connell is partnered by Donncha Ryan in the second row, Danny Barnes pairs up with Will Chambers in midfield and there's the exciting back three of Johne Murphy, Doug Howlett and Keith Earls, who, if served the right menu, are capable of gobbling up the goods.

There are still some tickets available for the game, from Munster offices in Tramore Road and Musgrave Park and will be on sale again this evening at the ground. 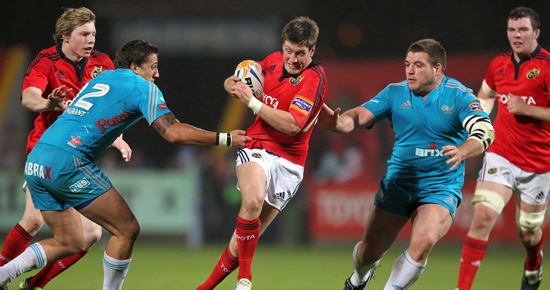 "A grand night for it," said one enthusiastic supporter arriving at Musgrave Park on Friday night. ‘It’ of course being the RaboDirect PRO12 game between Munster and Aironi but long before the end of that encounter, the Italians had incessant rain and the strong wind blowing directly into their faces and the scoreboard already announcing that this game had gone in Munster’s direction.

In stark terms it was your cliched, game of two halves.

In the opening half, Munster faced a strong breeze, a drifting rain and, let it be said, an inventive and committed opponent, and ended up leading 9-3 at the break.

It should have been 9-6, but Luciano Orquera missed a 'gimme' after Ronan O'Gara had edged Munster six three up. Despite the climatical disadvantage, Munster looked the more threatening with O'Gara pulling the strings and Doug Howlett and Johne Murphy constantly appearing with the 'open for business' signs writ loud on their forheads.

So too Peter O'Mahony, James Coughlan and Will Chambers whilst Paul O'Connell ruled the airways with some remarkable takes given the conditions.

Nevertheless, as had been the case a year ago, Aironi, thanks mainly to the work of Joshua Furno and Josh Sole out of touch, Nicola Cattina in the loose and Luciano Orquera and Sinoti Sinoti out wide, were still well in touch at the break that was heralded by an injury time penalty miss by Orquera.

But shortly before that, O'Gara had kicked Munster into a nine three lead with a fine effort into a stiffening wind.

Three more strikes from that almost unerring right boot moved Munster into an unassailable lead before he departed the scene to be replaced by Scott Deasy by which time the visitors obvious ambition was to preserve the sanctity of their goal-line.

And this they managed, despite the best efforts of O'Connell & Co. Deasy was given an opportunity to extend Munster's lead with a penalty but the ball toppled over just before he addressed it. He recovered to set off a move down the left hand side that had the Italians scrambling desperately to contain and when he was offered a further opportunity in front of the posts he opted instead for a close in lineout that once again the Italians thwarted. 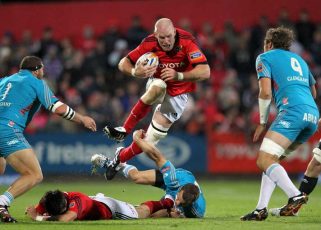 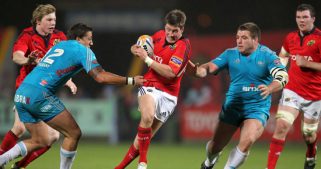