Treviso To Ask Questions Of Munster 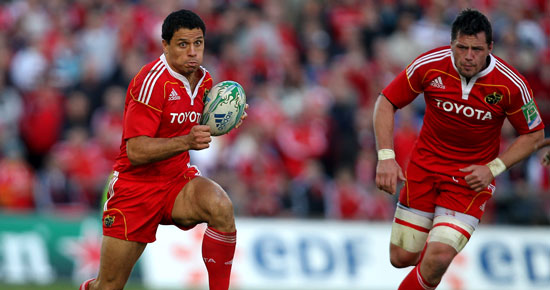 Gone are the days when complacency had any part to play when an Italian side visited and tomorrow, the strongest of the Italians clubs, Benetton Treviso arrive in Thomond Park Stadium determined to continue their good League form.

They sit in sixth place in the Magners League table on 12 points just six off the pace and already have claimed the scalps of Leinster, Scarlets and their fellow Italians Aironi Rugby.

They also came within minutes of causing the upset of the century when they led Leicester Tigers in the recent Heineken Cup game at Stadio de Monigo and their away form stands up too when you consider they gave Ospreys a run for their money before running out of steam at The Liberty Stadium.

Munster supporters will doubtless recall the last visit the Italians made to Limerick around this time last year when they raced into a ten point lead and it required a last gasp Doug Howlett tackle to prevent a third try in that opening half.

Brendan Williams and Andrew Vilk were the try scorers that day and they are just two of a handful of non-internationals included in the visiting side dominated by those who have worn the Italian jersey.

Munster have given a well earned rest to Denis Leamy and Niall Ronan, both omitted from the match day squad, Marcus Horan misses out through injury, while Donncha O'Callaghan, Tony Buckley and Paul Warwick may get a run from the bench.

Leamy is replaced by James Coughlan, David Wallace continues where he left off against Toulon and there's a first Magners start of the season at full-back for Scott Deasy.

Munster Win With Minimum Of Fuss 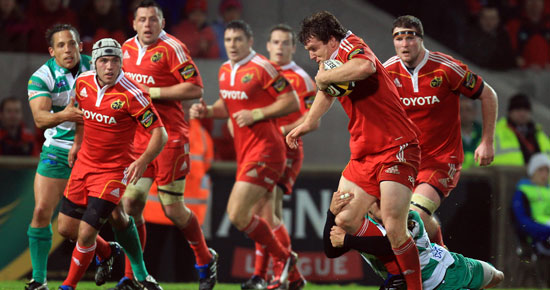 Five tries, three in the opening half and two in the second, saw Munster see off Benetton Treviso with the minimum of fuss at Thomond Park Stadium.

James Coughlan started where he left off against Toulon with a try in the 14th minute and it ended with late try for replacement Mike Sherry. In between there were tries for Damien Varley, Man of the Match David Wallace and Keith Earls who finished off a Wallace break with aplomb in the 48th minute.

In truth Munster never had to reach the heights they did the previous week but nevertheless they went about their business in a businesslike fashion that pleased coach Tony McGahan. "It can often be difficult to follow on from a performance like the Toulon one a week later, but I would have to be very happy with the attitude of the players and they way they played this evening." he said.

"I thought our application was excellent. The forwards gave us a good platform and the momentum to create the opportunities that we needed."

The pick of the tries came in the second half, started just inside the Munster half, with them holding a 27-6 advantage, when Ronan O'Gara seized on a loose ball and delivered a delightful pass to Wallace who made the initial incursion before delivering the scoring pass to Earls.

And if it's wasn't all over bar the shouting when Munster led 27-3 at half-time, it was then.

Perhaps not surprisingly the game lost it's lustre from then on and the Italians were allowed a little more possession that ended in a try for right wing Ludovico Nitoglia but there was never the remotest chance of a Treviso revival.

Two replacements, Duncan Williams and Mike Sherry played a central role in the final try, Williams throwing the deceiving inside pass and Sherry finishing off with the try despite being tackled close to the line.

From that restart Munster forced a turnover on the Treviso ten metre line and O'Gara was soon shaping up to add the extras to Coughlan's try and in the 20th minute Varley broke from a rolling maul to storm over with, once again, O'Gara kicking the two pointer.

Wallace won the race to the touchdown in the 38th minute although the referee referred the matter 'upstairs' and of course O'Gara converted and then added a late penalty to send his side into the break with a healthy 24 point lead. 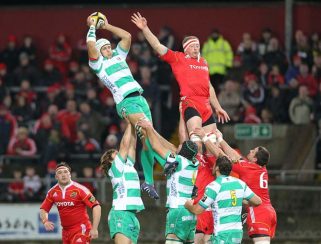 Munster Win With Minimum Of Fuss