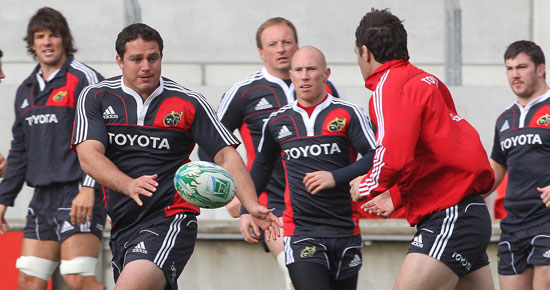 If we are to believe their coach Philipe Saint Andre, Toulon arrive in Limerick today on an educational journey more than a quest to take control of the most competitive Pool in this year’s competition.

And a measure of the challenge that faces Munster tomorrow can be gleaned in the fact that among Saint-Andre's eager pupils will be Jonny Wilkinson who will be sitting in the back of the class while Felipe Contepomi takes centre stage. Toulon are perhaps the only club in world rugby who can afford to have out-halves of the quality of Wilkinson and Contepomi in their squad.

Add in the likes of Paul Sackey, Pierre Mignoni, Carl Hayman, George Smith and skipper Johan Van Niekerk and you understand why Mick Galwey refers to them as, 'the best that money can buy'.

Galwey, now a part of the Munster management once famously exorted his colleagues some years ago to "please try keep it under 60", as they faced the conversion of yet another Toulouse try and his team manager that day was Jerry Holland.

Now, as once again Munster are faced with one of these "must win games", a feature of their unsurpassed record of 12 successive quarter final qualifications, Holland wonders about the expectation that's out there among supporters, on the eve of their clash with mega-rich Toulon and their galaxy of stars.

"I think the level of expectation from our supporters is a little unrealistic. I'm not sure there is an awareness of the challenge Munster face, particularly tomorrow." Holland says." It's probably because of what the team have achieved to date. They've become victims of their own success. And of course they wouldn't have it any other way. But people need to be conscious of the enormous challenge they (Munster) face, not just tomorrow, but every time they step out in this competition. Especially against French opposition."

Holland was team manager in each of the years that Munster reached the final including 2006 and 2008 when they won the trophy and he recalls the influence the crowd played. "I recall Stade (Francais) coming to Thomond and Biarritz the day Axel scored his hat-trick and won a lifetime of Pizza's."

"Then there were the games against Perpignan and Bourgoin and everybody had huge respect for these teams. While they were great games, they were complete dogfights for the first hour and it was only in the final 20 that these games were won."

"In the run up to those games," he recalls, "you could feel the excitement all week and on the day of the game the place (Thomond) was just hopping."

"But now there doesn't seem to be the same anticipation, the result almost taken for granted. And if they don't win in style…. ? God be with the days we used be delighted to win convincingly – by a point !"

"What Munster have achieved, qualify for the knock-outs for the past 12 successive years, is phenomenal. Toulouse, Leicester, they haven't managed that." Holland reminds us.

"But I think the supporters need to guard against complacency, bring a little bit of perspective to the expectations. What the team needs tomorrow is for the supporters to create the intimidating atmosphere that Toulon will be expecting and maybe bring a bit of the old atmosphere back to Thomond Park." 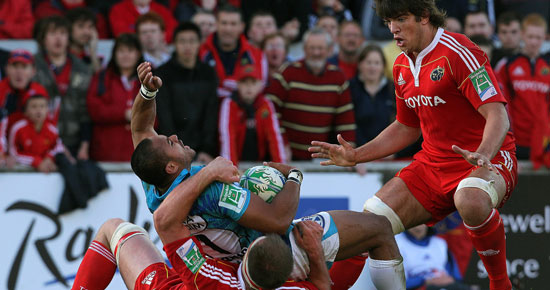 Six tries, three in each half, gave Munster a 45-18 win over Toulon at a packed and noisy Thomond Park Stadium on Saturday.

It's a victory that leaves them one point clear of Ospreys who they play here on the 12th December and came after they had produced their most complete performance of the season. The downside of the day was the sight of Jerry Flannery hobbling off, having come on as a 55th minute replacement for Damien Varley. Paul Warwick also retired injured but his is not considered serious.

The start was hardly one that anyone expected when Toulon hooker Jean Phillipe Genevois scored a try in the opening minute that Felipe Contepomi converted for a seven point. Mind you, there was more than a suspicion of forward pass in the lead-up to that score, a try that according to coach Tony McGahan and Denis Leamy focussed Munster minds. It was the Munster skipper who rewarded that focus with a try eight minutes later thanks to a reverse pass from Peter Stringer off a five metre scrum at a time when Toulon had been reduced to 14 when George Smith, perhaps harshly, had been binned for hands in a ruck.

When a long range Contepomi penalty attempt slipped wide and into Warwick's, grateful safe hands, a long touch find looked on. Instead,Warwick set off on the counter, linked with Doug Howlett who scalded his opposite number then stepped inside andother defended before sending Johne Murphy scorching for the line. Murphy dived for the line and looked to have scored but Wayne Barnes referred to the adjudicator and the try was denied.

Minutes later we were back upstairs as Barnes once again looked for direction and once again the eye in the sky said nay to Tony Buckley's effort. It was a case however of, 'if at first (and second) you don't succeed', and Buckley had his reward at the end of the opening quarter.

Munster's dominance continued. A neat Warwick break ended just shy of the line but with five minutes to go to the end of the half Howlett popped up from the middle of a ruck to dot down, the decision again referred to the television official before being confirmed.

O'Gara knocked over the conversion, Contepomi's subsequent miss cheered to the rafters and Munster went in leading 21-10.

When the sides came out for the second half Pierre Mignoni had been replaced by Laurent Magnaval and after O'Gara had stretched Munster's lead with a 46th minute penalty Toulon brought on Jonny Wilkinson. He moved to out-half and immediately gave a new energy and direction to his outside backs.

He dropped a goal within two minutes of his arrival and Munster were forced to defend out wide as Wilkinson launched a series of forays looking for the try that would have opened the game up. It never arrived.

Man of the Match Mick O'Driscoll scored the steadying and bonus point try in the 58th minute and shortly after when O'Gara sent one of his trademark kicks into the space behind the defence, into the right hand corner, Howlett homed in, outwitted two covering defenders to scoop and score.

Johann Van Niekerk scored a consolation for the visitors five minutes from time but Munster insisted on having the last say, with replacement James Coughlan diving under the posts just before the finish after Leamy had been stopped short. 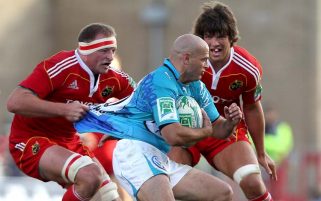 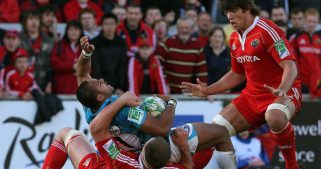