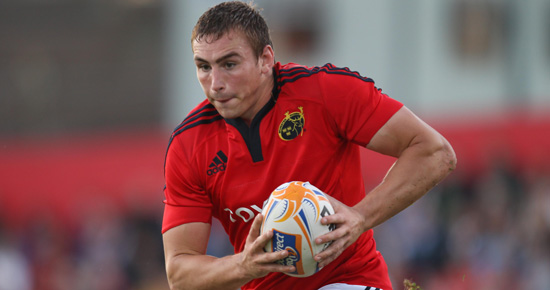 The one thing Cardiff Blues will not be lacking tomorrow evening when they take on Munster is incentive.

Not alone does the moniker of League champions put a large target on Munster's back but they also seriously dented Blues play-off hopes last season when they won here by a single point.

Blues make seven changes from the side beaten in Ravenhill last weekend, two of those positional and two forced by injury to Chris Czekaj (shoulder) and Tom James (calf) while Andries Pretorius returns from a knee injury to take over from Xavier Rush who slips to the bench.

"Similar to Ulster, all Munster sides are very disciplined and structured," said Blues coach Gareth Baber. "They will be physical and want to play in the right areas by implementing a good kicking game.

And in out-half Ian Keatley Munster have the ideal architect to implement Baber's prediction. He has looked particularly sharp in the opening games, particularly in Firhill when his raking touchfinds kept the Warriors pinned down in their own half for long periods.

Behind him Johne Murphy is enjoying a return to form and his booming clearances have also been a feature of Munster's impressive rearguard while the Peter O'Mahony led pack, with veterans Mick O'Driscoll and James Coughlan hugely influential, improve with each game.

Games between these two sides in recent times have been close run affairs and this one will follow suit. 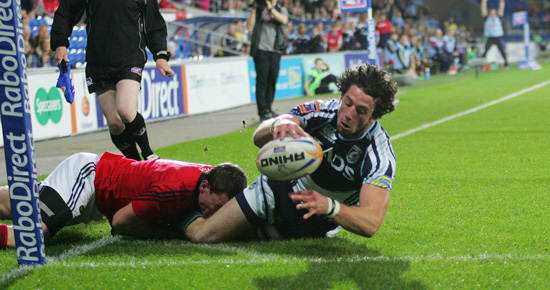 Keatley kicked six from six and not one of them a 'gimme' to make the most of the possesion eeked out on a night that ended in high drama.

With the last play of the game the Blues flashed the ball wide on the right and the impressive young wing Alex Cuthbert scorched over at the right-hand corner flag. However, the final pass was clearly forward and Munster emerged the deserving winners.

Ceri Sweeney should have kicked the Blues into the lead when offered an easy opportunity in the opening minutes and that miss looked all the more glaring when Keatley knocked one over from a metre inside the Blues half in the fourth minute.

Sweeney missed another opportunity in the tenth minute but he found a good position on the Munster 22 with a 12th minute penalty and when Blues went wide it needed a last gasp Denis Hurley tackle to deny Cuthbert in the corner.

Referee David Wlkinson referred that one 'upstairs' and moments later he needed to go there again to determine if Xavier Rush had made the line. He hadn't and Munster's tryline remained unbreached after 255 minutes of RaboDirect PRO12 rugby.

Sweeney finally found the range form 23 metres after Munster were penalised at scrum-time but in the 21st minute when Munster walked the Blues pack backwards Keatley nonchalantly stroked over the penalty from wide on the right to out his side back into the lead.

He was on the mark again in the 32nd minute with a marvellous effort from wide on the left near half way and reprised that four minutes later to leave Munster leading 12-3 at the break.

Cuthbert became the first player to score a try against Munster this season when he ran one in, in the 44th minute, Sweeney's conversion saw the gap reduced to just two points but from the restart Blues were penalised and once again Keatley dissected the posts with a cracking effort.

The arrival of Casey Laulala in the 53rd minute added a potency to the Blues backline that had been previously missing and once again a big Hurley hit in midfield ended a threatening Blues move, the subsequent Munster put-in forcing another penalty and another superb Keatley strike, his sixth from six, pushed Munster eight points clear with 23 minutes to run.

A scrum put-in to the Blues just outside their own 22 provided an unlikely launching pad for the home side's best attack of the night with Lualala orchestrating the move that ended five metres short of the Munster line but the breakout almost saw Doug Howlett get clear before the initiative was lost when Munster were penalised.

Cardiff upped the ante. Cuthbert got bundled into touch five metres out on the right and then Munster somehow defended their tryline under the posts but conceded the penalty and Sweeney made it a one score game (13-18) to ensure a frantic finish.

With four minutes left on the clock a Blues breakout was helped by clear blocking that went ignored and play was taken back into the Munster where they coughed up their own lineout.

The Blues attacked on the right then left, Munster were penalised and lost Keatley to the sin bin and from the subsequent five metre lineout, drove for the line, were resisted but won another five metre lineout.

From that, getting no change from the Munster forward pack, they spread the ball wide, had an overlap that Cuthbert took advantage to cross in the corner only to be whistled back, and rightly so, for a forward pass. 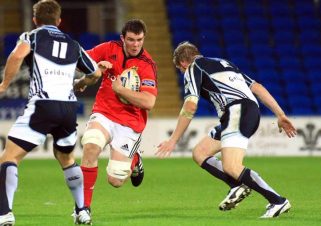 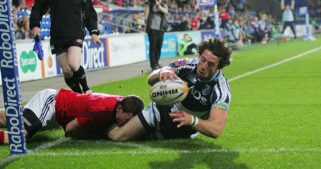