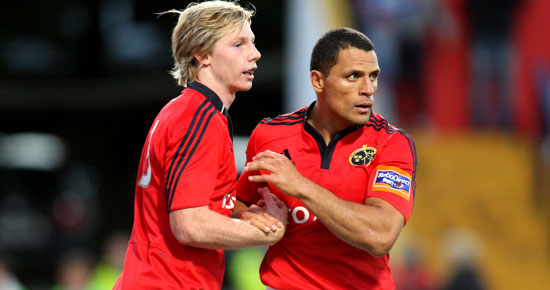 There’s a feeling abroad in Glasgow that tonight’s clash in Firhill Stadium is cherry ripe for the Warriors to get their RaboDirect PRO12 campaign up and running.

They gave Ulster more than a decent run for their money in Ravenhill last weekend and would see an opportunity tonight to make amends for the points they feel they left behind them in Belfast.

There's also the little matter of the tonking Munster gave them last season when Warriors scored 29 points and still got beaten (29-43) having led 26-17 at the break.

They give a debut to 21 year old elite Development player Nick Campbell, who'll pack down in the second row alongside Tom Ryder which means a switch to the blindside flank for skipper Rob Harley.

Munster need more of what they delivered in the first half against Dragons and much less of what we saw in the second for this fixture that has always proved troublesome in terms of harvesting points.

Munster captain Peter O'Mahony is looking for a step up from last week. ""I've never played them here but been involved against them a couple of times and they've always been a hardy team". he said.

"They have a big physical pack. They're well able to throw the ball about especially at home. Getting points on the road is always difficult but we'll go in with a positive mindset."

"I think we've progressed every game since the first one in La Rochelle. We've taken it up a level every week since so our aim is to keep that momentum going and drive on with our own game plan."

12th On The Trot For Munster 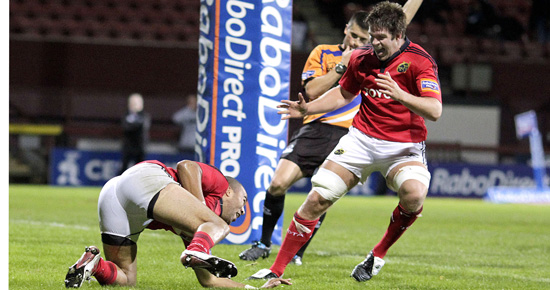 Munster created history in Firhill where their 23-12 victory over Glasgow Warriors made them the only side in the history of the competition to notch up 12 successive victories.

And they were full value for that win keeping their opponents tryless for the second week in a row while scoring two themselves, the first from Niall Ronan just before half time and the second from Simon Zebo at the start of the second.

They led 16-6 at the break, out-half Ian Keatley providing them with direction with some wonderful line kicking and 11 points, three of those coming from a penalty he kicked from about four metres inside his own half.

Munster stung the home side with that try from Ronan right on half time and there was further woe for the home side when Simon Zebo rounded off a period of intense pressure with a try in the 45th minute.

Speaking about that crucial score Zebo said, " The ball was kinda slow but Mafs got on the end of it after a good line from Strings and I was just following Mafs on the inside. Y'now when he (Mafi) gets on the ball you always expect him to break the tackle and Iwas hoping to get the off-load.

After that Munster spent a good deal of the remainder of the game defending their line which they did with a determination and commitment that was hugely impressive. Towards the closing stages Munster turned down kicks at goal instead taking quick taps or going for close in line-out but were unable to break the Munster defensive line.

Once again however, they lost two players to the bin, Ronan in the 15th minute and Billy Holland in the 68th, that one looking more than a little harsh. Those yellows wont have pleased Tony McGahan but there was enough that will have from a side that is growing in confidence. 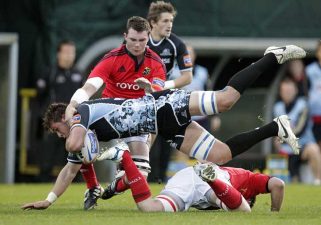 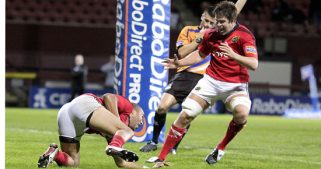 12th On The Trot For Munster