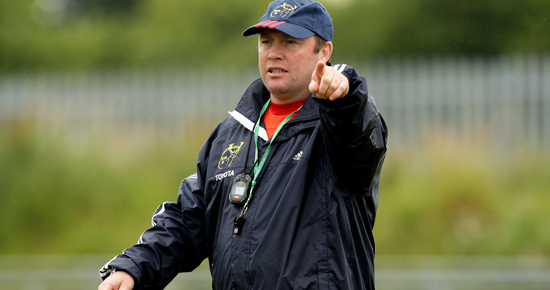 They may be trailing by 19 points and separated by nine clubs in the League table but that will count for nothing when Newport Gwent Dragons take on Munster tonight in the Magners League clash at Rodney Parade 97.05).

Munster will be mindful that they arrived here last year in similar good health only to be dispatched 31-22 by the home side and this time around the Dragons will be keen to put that uncharacteristic display against Leinster last time out. They coughed up ball they normally wouldn't, a trend that has crept into their game as their coach Paul Turner admitted. “As a team we have lacked cohesion, we need to look after the ball better. I’m pleased with our defensive structure which has improved but we can’t miss one on one tackles like we did in Dublin last week and get away with it."

They have their Welsh squad pair wing Aled Brew and number 8 Toby Faletau back for tonight's game and not surprisingly both are included in the starting XV as is centre Tom Riley who missed the Leinster game with a hand injury. Scott Morgan has been withdrawn because of a slight neck injury, his place going to the experienced Luke Charteris while Jonathan Evans returns to the replacement bench from injury to provide the back-up at scrum-half.

For their part Munster show just one change to their backline from last weekend, Tomas O'Leary returning from injury taking over from Duncan Williams who injured an ankle in that game against Scarlets.

Up front, there is a first Magners League start for Dave Ryan, brother of Timmy, while John Hayes replaces Peter Borlase who is named on the bench and Tommy O'Donnell is preferred to Peter O'Mahony at blindside.

Munster arrived in Newport yesterday and are billetted in the Celtic Manor Hotel where this afternoon the first flurries of snow swept in but conditions are expected to be cold and dry this evening come match time with part of the Rodney Parade pitch covered all day to protect from frost.

"We should have waited for the Italian (referee)", muttered one disgruntled frozen Munster supporter as he trudged disconsolately from Rodney Parade after watching his side lose 20-6 to Newport Gwent Dragons.

The reference was to the performance of stand-in referee David Bodily who stepped in when Alan Falzone failed to beat the traffic snar-up en route to Newport. Welshman Bodilly make some strange decisions but neither pack leader James Coughlan nor coach Tony McGahan would entertain any criticism of the official.

"Firstly I'd have to give credit to them (Dragons)," said McGahan," for their work at the breakdown which I thought was excellent. They kicked very well, used their possession and took their chances. Hats off to them, we can't have any quibble or offer any excuses."

Munster conceded six penalties in the opening quarter and Jason Tovey missed three attempts at goal before he converted Tom Riley's 22nd minute try. That came off a Dragons lineout after they'd gone for touch from the penalty that saw Sam Tuitupou's yellow card. It was a harsh decision demanded by the assistant referee after Bodilly had adjudged that the penalty was sufficient for Tuitupou's late hit on Tovey.

Replays suggested that Bodilly's initial reaction was correct but even to the naked eye in real time Tuitupou's collision with the out-half was accidental.

Munster went further behind – after Tomas O'Leary had prevented a certain try by holding up a Dragon as he attempted to ground for a try – when Gavin Thomas scored from a close in forward drive.

Paul Warwick missed a subsequent long range penalty but kicked an easier one moments later but Tovey was again on the mark in injury time to send the Dragons in with a commanding 14 point lead.

McGahan sent on Wian du Preez and Peter Borlase for the second half and there was a marked improvement in their that permeated throughout the side. They upped the pace considerably and created chances, none clearer than when Barry Murphy made good headway up the left touchline, kicked ahead and was desperately unlucky not to score.

Warwick kicked a 46th minute penalty and five minutes later Dragons were reduced to 14 when hooker and captain Tom Willis was yellow carded. From that penalty Warwick found touch five metres out but that opportunity went a-begging when the match referee awarded a penalty against Munster for apparently delaying their (own try scoring opportunity) line-out.

However, on a rare foray into Munster territory Tovey dropped a superb goal to heap further pressure on Munster and though they peppered the Dragons line in the closing stages in search of a losing bonus they were denied by a committed Dragons defence. 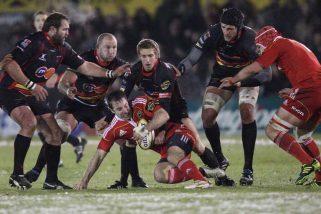