Tough One For Munster

Munster face a tough return to RaboDirect PRO12 activity with a trip to the Sportsground to play a Connacht side this evening (5.15) showing just two changes from the side that lost in Biarritz.

Connacht coach Eric Elwood names an unchanged back line while up front, Ronan Loughney makes way for Nathan White and George Naoupu starts in the second row alongside Mike McCarthy.

Michael Swift and 22-year-old centre Eoin Griffin have both returned from injury and are listed among the replacements.

In contrast, Penney fields a much changed side from the one that ran out against Saracens and welcomes back from injury Denis Hurley, Tommy O'Donnell, both named in the starting XV, and Sean Dougall who is named on the bench. Dave Kilcoyne has also recovered from the stomach bug that forced him out of last Sunday's game.

Penney is fully aware of the task facing his side. "Connacht have had a few years of Heineken Cup experience now. They've matured as a group and playing us up there on their home track is something they'll be relishing.

"So yes it's a difficult prospect but no more difficult than the RaboDirect PRO12 generally.

It's a tough robust competition and if you don't prepare well you'll pay the price.

So the focus for us this week was making sure that we're doing all we can to get the right lads in the right spot given that it's a short turnaround (from the Saracens game)."

Munster Show Their Gritty Side

Munster and Connacht served up a marvellous game of rugby in awful conditions at the Sportsground before the James Coughlan led Munster men won 16-12 having led 13-6 at half time.

And while there can be no quibble whatsoever about the merit of their victory it must be said it required two instances of last gasp defence to deny the home side tries.

The first came mid way through the second quarter when Ian Keatley chased down Fetu’u Vainikolo to deny him in the left hand corner and then in the second it was Peter Stringer, superb throughout who got across to deny Naoupu in the 69th minute.

Two penalties to one in favour of Dan Parks had Connacht leading 6-3 after 22 minutes and shortly after Keatley denied Naoupu.

Pack power led to a penalty try in the 39th minute and from the restart of that score, Connacht were penalised and Keatley boomed one over from the half way.

Within a minute of the restart Keatley had stretched the lead to ten points (16-6) with another penalty but Connacht enjoyed a period of dominance and a penalty and then a drop goal had the home side just four points in arrears.

Parks was wide with one he'd normally kick for a penalty that saw James Downey yellow carded and it seemed Connacht would snatch it when Naoupu latched onto a kick through but Stringer's intervention saved Munster's bacon, Naoupu adjudged to have had feet in touch before he touched down. 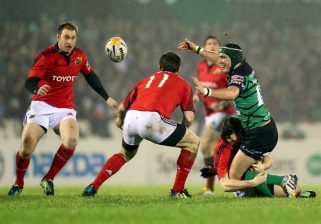 Munster Show Their Gritty Side