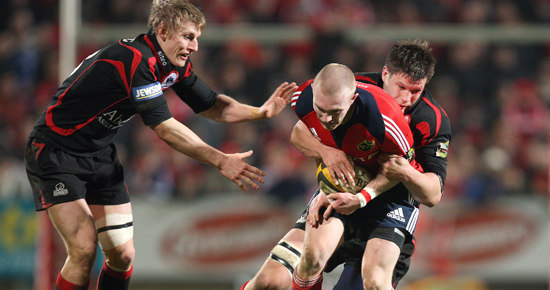 The current Magners League season is shaping into its most competitive ever, and with the end of season play-offs to aim for, the battle for the top four placings is already intriguing.

With only five points separating the top seven clubs, it’s already evident that every point gained, be it in victory or defeat, looks vital when it comes to the business end of the campaign.

Defending champions Munster, who will seek to build on the momentum of last Saturday’s second half display against Treviso, know they’re in for a hell of an examination in Murrayfield this Friday.

Edinburgh have made considerable strides in recent seasons, due in so small part to the fact that half of their 36-strong squad were born in the city in which they ply their trade.

"Edinburgh is a good club to be a part of and we’ve all brought our own ideas to create a real club feel to it," said skipper Mike Blair. "The more guys you have coming through and only playing in Edinburgh does make a big difference – you create a strong identity.

"The more guys you have playing together over a long period of time then the more successful a club will be…camaraderie off the pitch can often support the teamwork on the pitch."

That strong parochial sense is something which Munster’s players and fans can empathise with, and that sense of togetherness makes Edinburgh dangerous opposition for the champions.

Munster go into this game seeking to get back to winning ways in league action, following their heavy defeat at the RDS, and a series of injuries has forced Tony McGahan to adjust accordingly.

Last Friday night, Stephen Archer was in action for Munster A in Clonmel and he could scarcely have imagined he’d be in Murrayfield a week later.

It’s a big step up for the 21-year-old tight-head, who, standing six feet two inches and weighting 112 kilos, isn’t your average member of the front row club.

As manager Shaun Payne said when naming the squad earlier this week, this is a chance for the Cork Con man to put his hand up and stake his claim.

Given injuries and John Hayes’s suspension, Munster’s front row at Murrayfield will be the first time that the named trio will have crouched down in competitive football for the province.

And that’s not a bad thing. The time will come when McGahan will not be able to call upon the stalwarts that have contributed so handsomely to Munster’s success, so it’s more than useful to get a look at what the next wave are capable of.

If Edinburgh played in an arena similar to Firhill, where Munster have already lost this season, they’d be an even more difficult proposition.

Row after row of empty seats at Murrayfield renders a hostile atmosphere pretty much impossible to create, but the hosts have an excellent record against Irish teams on their own paddock in recent seasons.

Defeat will leave Munster with three wins and three reversals from their opening half-dozen Magners outings, something they’ll be keen to avoid given the looming break for the Autumn internationals. A mightily difficult assignment awaits them.

No consolation at all in Murrayfield 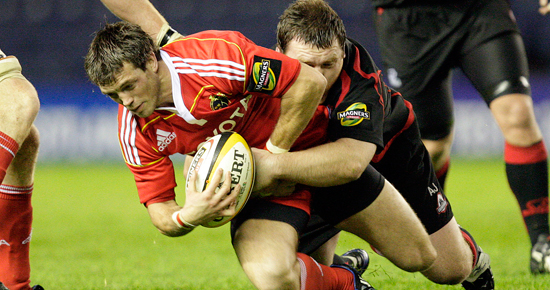 The losing bonus point they picked up offered not a crumb of consolation to a dejected Munster dressing room following the 12-7 defeat to Edinburgh in Murrayfield.

That they came up short because of their own alarmingly flat performance rather than any particular brilliance on Edinburgh’s part is what will rankle with the defending champions as they slumped to a third Magners defeat. And just as disappointing is the fact that despite their shortcomings they could in fact have sneaked this one.

They trailed by nine points at the break thanks to three Chris Paterson penalties in a half that saw them lose the penalty count 11-2 and yet had what looked a good David Wallace score denied them by the video ref and a clear-cut Keith Earls opportunity whistled back for a forward pass that was another marginal decision.

They were however fortunate at the start of the second half when Ian Dowling missed a Phil Godman cross-field kick that ended in the clutches of a speeding Tim Visser. He looked odds-on to score only to be hauled down by the alert Jean de Villiers and when Wallace eventually dotted down in the 50th minute hopes were that this was the start of the Munster come-back.

Those hopes proved unfounded and when Munster were yet again penalised shortly after, Paterson landed his fourth successful kick to end the scoring even though there were over 20 minutes remaining.

Edinburgh were on the scoreboard right from the kick off, Munster penalised for being ahead of Tomas O’Leary when he box-kicked on his own ten metre line.

Paul Warwick tried a long range drop kick to no avail and then we had a quick counter by the Munster backs that ended with de Villiers pass to Earls adjudged forward.

A good touch find from Ronan O’Gara gave Munster the platform to launch Wallace at the line but when he was deemed to have been stopped short they managed to turn the ball over and Edinburgh relieved the pressure.

The next incursion into Munster territory earned the home side another penalty and another three points and again in injury time Paterson stepped up to slot another one.

After the early second half Visser scare, referee Morris again went ‘upstairs’ to see if Dowling had managed to ground his kick ahead. He hadn’t but Wallace’s try followed and O’Gara converted.

However, other than a difficult long range O’Gara penalty Munster’s subsequent efforts to wrest control foundered in an error strewn end game. 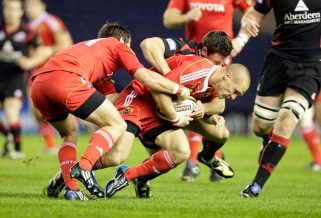 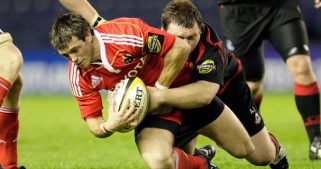 No consolation at all in Murrayfield