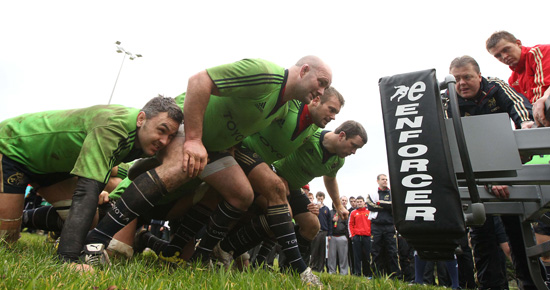 Tonight, the RaboDirect PRO12 clash against Connacht (Thomond Park Stadium 7.45) affords Munster supporters the opportunity to say goodbye to one of the truly outstanding contributors to Munster Rugby when John Hayes plays his 217th and final game for the province.

Hayes brings the curtain down on a career that began back in 1997. He made his debut the same season as Ronan O'Gara, David Wallace, John Kelly and Anthony Horgan, won his 100th cap in April 2005, his 200th in the Amlin quarter final last season against Brive and earlier this year won his 100th Heineken Cup cap against Northampton Saints.

And for this game tonight it's very much a case of youth and experience that Tony McGahan serves up. Hayes joined in the pack by another 200 capper Marcus Horan and the next two best placed to achieve that feat, Donncha O'Callaghan and captain Mick O'Driscoll.

Callow youth is represented by Paddy Butler at number eight and a clutch of them in the backs such as Simon Zebo, Danny Barnes, Luke O'Dea and Sean Scanlon with the wily Tomas O'Leary at number 9 to direct the flow.

To take Connacht – no win in last 10 outings – at face value would be foolish in the extreme. They have suffered some of those reversals in the intimidating arenas of The Stoop and Kingsholm and have been desperately unlucky in both.

Eric Elwood makes just one change from last time out against Gloucester, Fetu'u Vainikolo in for the injured Mark McCrea (hamstring) so he brings an experienced battle hardened squad to Limerick and obviously sees an opportunity of creating an upset.

Munster will of course have the added incentive of wishing to send Hayes off in the best possible fashion but as O'Driscoll pointed out earlier in the week, that desire alone will not suffice.

This could be every bit as close as anything we've seen against Northampton or Scarlets but it is to be hoped that Munster supporters turn up in their droves and give John Hayes an appropriate send-off.

On the night when John Hayes took his leave of the Munster scene, a mixture of young and not so young combined to gave him a winning send off with a 24-9 win over Connacht in front of a 15,000+ audience.

There were the likes of Marcus Horan who has passed the 200 cap mark. And there was Donncha O'Callaghan and Mick O'Driscoll who are next in line to hit that mark. But there was a clutch of youngsters in the side who stepped up to the mark and ensure that Hayes ended his time in the Munster jersey, as he had started it, with a win.

And in contrast to recent games, Munster didn't leave their supporters clinging to the edge of their seats as the final whistle beckoned, instead really wrapping up this game in the opening half with tries from debutante Sean Scanlon and Tomas O'Leary.

They led 18-3 at the break and at no stage in the second half did the visitors look like overturning that lead. Not that they didn't have either the possession and therefore the opportunity. But Munster's defence was rock solid while Connacht showed a certain lack of ambition in the latter stages as they opted for shots at goal rather than the close-in lineout and the chance of a five/seven pointer. Two second half penalties from Ian Keatley were sufficient to keep Munster in front throughout the second period.

Keatley opened with two misses from the 10 metre line before opening his side's account with an easier effort in the 15th minute. He kicked a second eight minutes later and after Niall O'Connor had got Connacht up and running Scanlon scored a beauty of a try.

Keatley added the conversion and then six minutes from the break O'Leary took full advantage, when Fetu'u Vainikolo made a total bags of O'Leary's grubber, to score Munster's second try.

O'Connor missed a penalty just before and just after the break and that, to all intents and purposes, was that as far as Connacht were concerned.

From a crowd point of view it became a case of waiting and watching for Hayes to depart. And when he did, around the 60th minute mark, the place erupted, the man from Cappamore treated to over a minute of sustained applause while those left behind continued with their business.