Even more so after last nights RaboDirect PRO12 results, it’s a case of three into two won’t go in the race for the one remaining play-off spot.

And with Munster clinging onto the coat tails of fellow contenders Scarlets and tonight's opponents Ospreys, there is only one outcome that will keep their Rabo ambitions intact after this joust with the title holders.

Ospreys have only lost one of their last seven RaboDirect PRO12 games, away to Connacht – who Munster face next – while Rob Penney's side has lost three out of the last four games they've played and that respective form is why Munster find themselves in the unusual position of outsiders with the bookies in their own back yard.

Maybe worringly too, Ospreys are making all the right noises as they head for Limerick. Their prop Cai Griffiths, back from London Irish on a loan he hopes will become permanent, expects a backlash but talks also of an Ospreys desperation for victory.

"It's always a dangerous place to go." he told The South Wales Evening Echo. "Munster are a quality side and we're not taking too much notice of their recent results.
"Sometimes it doesn't happen for a number of games and you can't put your finger on what is going wrong. Then, bang – you turn it around, get four tries and forget what's happened in the previous couple of weeks. We just hope it will not be this weekend because we are desperate for a win ourselves.
"We're just looking to go there and do a job on them. It's about ourselves, not anyone else."

Munster welcome back skipper Doug Howlett and internationals Ronan O'Gara and Dave Kilcoyne and they give a first start to Cathal Sheridan.
What's needed is a performance light years removed from what was delivered against either Scarlets or last week Treviso.

And even then, it may just come down to whoever gets that little rub of the green.

A much improved performance failed to produce the required victory over Ospreys, the eventual 13-13 draw means Munster must deliver a faultless five game finish and even then hope others will do them favours if they’re to be involved in the RaboDirect PRO12 beyond the first week in May.

That they didn't manage to pull off a much needed win owed much to a lack of cutting edge out wide where they often found themselves crowded in the five metre tramlines while the Ospreys offside defence was allowed go unchecked all night.

However, there was more to it that insofar as the Welsh side came to play and brought a physicality and no small amount of vivacity that in other circumstances would have had the home side happy to share the spoils. And even though the half-time might indicate otherwise it was an entertaining and fast flowing opening half.

From a Munster perspective, reasons to be cheerful, besides a solid scrum, were the return to something like his real form for Ronan O'Gara who kicked the points on offer, forced the Osprey speedster back three to counter from deep and moved his backline well. There was also a satisfying first start at scrum-half for Cathal Sheridan, Dave Kilcoyne made some serious carries while Stephen Archer, despite a yellow card, continues to show signs of real progress.

Taking Matthew Morgan's game starter Munster shifted the ball right and left but inside their own 22 and ended by coughing up possession and conceding the scrum. They continued to dominate and O'Gara opened their account with a 4th minute penalty, just reward for the early effort. Minutes later he should have had the chance to make it 6 when Nigel Owens indicated a penalty but the Welsh official somehow declined to go back when no advantage accrued from the very next play.

Both sides continued to spread the ball but two pinpoint kicks from O'Gara, the first to the left hand corner and then the second that had Kahn Fotuali'i in all sorts of bother on the other side represented Munster's best patch. That phase ended with an Ospreys break-out that needed a last gasp Jones tackle on Tom Habberfield to save a try.

Level six all at the break Munster started the second half in determined mode and were rewarded when a series of drives ended in a try for Damien Varley left of the posts leaving O'Gara with a tap-over.

Moments later when Munster were penalised and Archer binned, Morgan spurned the three points on offer, opting for the lineout and from that Jonathan Thomas crashed over in the corner with Morgan firing over the touchline conversion.

The game played itself out with little much drama, neither side afforded much opportunity to snatch victory until right at the very death when O'Gara had a go from distance with a drop goal effort that drifted right and wide. 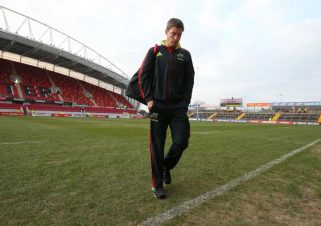