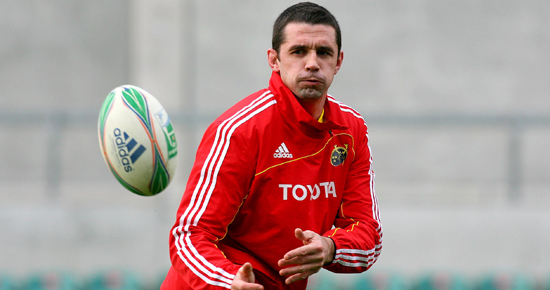 The fact that it’s the French Champions Perpignan – a side who dismissed Munster’s conquerors Northampton almost nonchalantly in the last round – who are in town tonight lends a nervousness to the Limerick air ahead of the restart of the Heineken Cup.

Besides the fact that Perpignan are on top of their game right now, Munster’s last outing against Osprey was decidedly patchy and the visitors undoubtedly believe they can become just the second side to win at this venue since the competition started fourteen seasons ago.

For their part Munster believe that if they can eradicate the mistakes that have plagued their play. If they can produce on the pitch the good work they’re doing off it. And if they can bring the intensity that has made them such a phenomenal Heineken Cup side to Thomond Park Stadium this evening, the result will take care of itself.

One of their key go-to players is Alan Quinlan and the farmer’s son from Limerick Junction will play a key role in containing and combating an area that could prove crucial this evening.

Quinlan will win his 70 Heineken Cup and 184th Munster cap tonight and he likens the challenge to the international arena.

"These games are close to test level standard and if you want to get results most aspects of your game have to be on the higher of the scale of being absolutely right. You’re going to have mistakes and that’s part of it but there’s very little room for manouver against a side with the quality of Perpignan." he said.

"Yes it is a massive game." he continued. Obviously we’re not looking beyond it. Our focus these past few days has been solely on this game. On putting in a performance. We know that (performance) has been patchy. We don’t need reminding. They’re a very strong physical side. They’re the French champions and they’ve always been very competitive in this competition.

"But there’s a good buzz in the group. We’re looking forward to a tough challenge. A tough couple of weeks."

Coach Tony McGahan has rung the changes with Keith Earls partnering Lifeimi Mafi in preference to Springbok Jean de Villiers while Denis Hurley gets the nod over Ian Dowling on the left wing.

Up front Denis Fogarty continues in the absence of the injured Jerry Flannery with another Springbok Wian du Preez on his left and the old reliable John Hayes on Fogarty’s right. Behind them they’ll have the familar weight of the two O’Cs with Quinlan joined in the back row by his Tipperary buddy Denis Leamy and David Wallace on the openside. 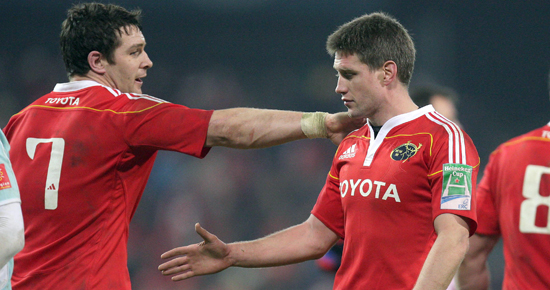 That Munster and O’Gara have found getting back in the groove a tad difficult since the start of the season cannot be questioned.

Such analysis comes naturally, one surmises, due to a decade of remarkable consistency in the most attritional field sport of all, with the Munster story best exemplified by John Hayes’s remarkable longevity.

This time last season, the province was producing arguably the greatest brand of rugby we’ve ever seen on this island, the quality of their play somewhat overlooked by the time Leinster came a calling at Croke Park.

The Heineken Cup quarter-final victory over the Ospreys was the high-water mark of the campaign – and that was less than six months ago with practically the same team.

So anyone out there talking about the end of an era and all that really ought to know better – you dismiss Munster at their peril.

The victory over Perpignan on a chilly night at Thomond Park offered further evidence of what makes Munster a team which continues to stand alone.

On the day that the province lost one of its great talents in Johnny Moroney, who played his part in the 1967 defeat of Australia, the spirit of Munster shone as brightly on the paddock as the Christmas tree in the middle of the Shannon.

There were problems in both the scrum and lineout, and the video analysis of the three conceded tries will make for uncomfortable viewing when the team reassembles during the week for training.

Despite all of this, despite losing three to zip on the try count, Munster still emerged victorious against the French champions, whose losing bonus point keeps them in the Pool One hunt.

The strength of Munster’s character is one element of their make-up that can never be called into question.

When Ulster ruled the interpro roost in the 80s, none of the small dedicated number that then followed the men in red around Ireland ever questioned their bottle.

In fact, no-one really had until a few high-profile defeats of late, beginning with the reversal to Leinster at Croke Park – which included some lopsided analysis that ignored the quality of Leinster’s performance.

On the road, Munster have found the going tough, but just look at both the Magners League and Heineken Cup this season – they’ve been wildly unpredictable, having thrown up some unexpected results. And both competitions are all the better for that.

But Munster, despite not hitting the ground running this time around, remain in control of their own destiny in Europe and only three points shy of the Magners League summit. Some crisis alright.

Some have chosen to illustrate Munster’s less than smooth opening to the campaign through one player: Ronan O’Gara.

By not producing his customary 9/10 display every week, lazy critics have claimed that the Lions tour has left some emotional scarring in our number 10. Has it? Only ROG knows that.

But last night, O’Gara was at his outstanding best, kicking seven penalties and a clever drop goal off his left boot.

He directed Munster’s attack excellently, and though forays into the Perpignan 22 weren’t as plentiful as one might have hoped for, O’Gara ensured the game was mostly played inside the visitor’s half.

On Sunday week, the province will call on all their European experience to see off the French, with the minimum return of a single point next week likely to knock Perpignan out of the Pool One shakedown.

But don’t expect Munster to approach the trip to the Stade Aime Giral that way.

Tony McGahan knows that a win will put his men firmly in control of the pool and while Perpignan don’t lose too many in their own backyard, only a fool would dismiss Munster’s chances.

Denis Leamy was outstanding all game long (what back row spoils Irish rugby currently possess), as were Donncha O’Callaghan and Paul O’Connell. The men we expected to stand up once again did so. Mumhan abú! 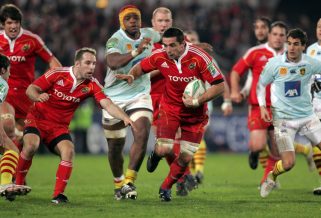 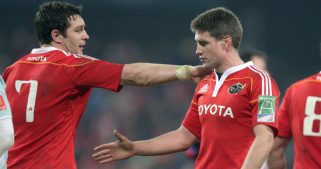