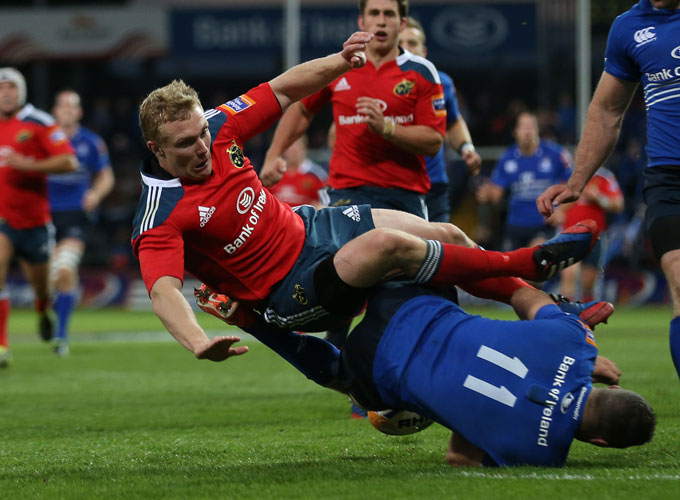 Munster Head Coach Rob Penney has made 10 changes to the side that beat Treviso last week for tomorrow night’s RaboDirect PRO12 clash against Leinster at the Aviva Stadium (ko 7pm).

Paul O’Connell, Peter O’Mahony, Conor Murray and Tommy O’Donnell all return to the side after helping Ireland to the Six Nations Championship.

Ian Keatley, man-of-the-match when Munster beat Leinster 19-15 at Thomond Park in October. returns to the side to partner Murray in the half-backs. Keatley will be looking to reach 500 points for Munster, the out-half has scored 497 points in his 67 appearances.

Denis Hurley comes in to partner Casey Laulala in the centres with Laulala set to make his 47th appearance after less than two years at the province.

Simon Zebo is named on the left wing and will earn his 60th Munster cap with Keith Earls, who made a try-scoring return from injury last week, and full-back Felix Jones maintaining their places.

Props Dave Kilcoyne and BJ Botha are both drafted into the side to join hooker Damien Varley in the front-row.

O’Connell, who missed the Treviso clash with a slight shoulder niggle, joins Dave Foley in the second-row with captain O’Mahony coming into a back-row that also includes O’Donnell and James Coughlan, who keeps his place.

Duncan Casey, James Cronin and Alan Cotter are the front-row replacements. Record appearance holder Donncha O’Callaghan and CJ Stander complete the cover in the forwards. Duncan Williams, JJ Hanrahan and Gerhard van den Heever are also named in the squad and will be hoping to make an impact off the bench.

On the injury front, Donnacha Ryan is wearing a protective boot after a specialist identified a strain under his right foot. It is not a common injury and will need to be treated and monitored on a week-to-week basis.

Cotter is included on the bench after Stephen Archer pulled up in training yesterday while fellow prop John Ryan is progressing well following return-to-play protocols after a concussion against Treviso last weekend. 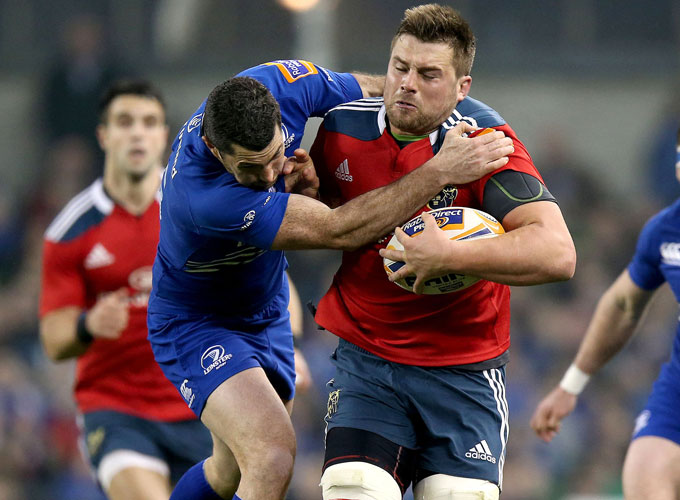 Munster fell to a disappointing 22-18 defeat to Leinster in Dublin but remain in second place in the RaboDirect PRO12 with Toulouse up next in the Heineken Cup quarter-final at Thomond Park.

Four Ian Keatley penalties had Munster 12-6 up at the interval but Brian O’Driscoll scored the game’s only try in the second half with five Ian Madigan penalties sealing the win, although Munster did pick up a losing bonus-point.

Peter O’Mahony was a late withdrawal from the Munster side with a hamstring twinge as CJ Stander was promoted from the bench to start his biggest game for the province. Billy Holland came into the replacements and Damien Varley took the captaincy.

The impressive Keatley kicked Munster into a 6-0 lead after just eight minutes with Simon Zebo and Stander both contributing to a frantic, physical start as Keatley broke the 500 point barrier for Munster.

Paul O’Connell had to leave the field for ten minutes early on with a head injury and, despite Leinster having the lion’s share of possession, Keatley made it 9-0 on 21 minutes after an infringement in the scrum.

Leinster had their first opportunity to get points on the board in the 25th minute after Felix Jones was penalised for holding on and Madigan was on target with the difficult penalty from the left to reduce the gap to six points.

Mike Ross collapsed a scrum just short of the half hour and Keatley continued his superb form off the kicking tee to land the long-range penalty and restore the nine-point lead.

Madigan made it 12-6 two minutes before the break after Dave Kilcoyne was penalised in the scrum.

More Leinster possession in the Munster half followed and Casey Laulala was penalised for offside at the end of the half but Madigan was narrowly wide with the penalty and Munster led 12-6 after an absorbing first half.

Madigan made it 12-9 five minutes into the second half after Tommy O’Donnell was pinged for not rolling away after a great break off the scrum by Eoin Reddan.

Dave Foley was next to be caught for the same offence and Madigan levelled the scores in the 51st minute.

Kilcoyne was sin-binned in the 54th minute as Munster were once again penalised for not rolling away and Leinster went for the corner from the penalty.

The maul was brilliantly defended and when Leinster went wide to Gordon D’Arcy, Keatley and Denis Hurley did brilliantly to win back possession with a choke tackle.

However, the respite was brief and O’Driscoll scored the only try of the game in the 57th minute. That try, converted by Madigan, moved Leinster into the lead for the first time with Shane Jennings providing the assist with an excellent offload.

Munster responded brilliantly and went almost the length of the field in a real team move with backs and forwards combining but the only reward was a penalty and Keatley reduced the Leinster lead to four.

With time ticking down, Keatley landed another long-range penalty to make it 19-18 with three and a half minutes remaining after a high tackle by Mike Ross on Stander.

Just two minutes later, however, Madigan kicked his fifth penalty of the night to make it 22-18 and that’s how it ended. 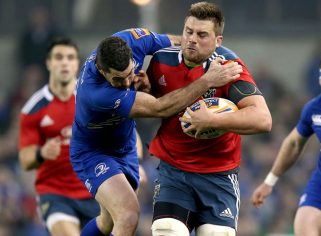