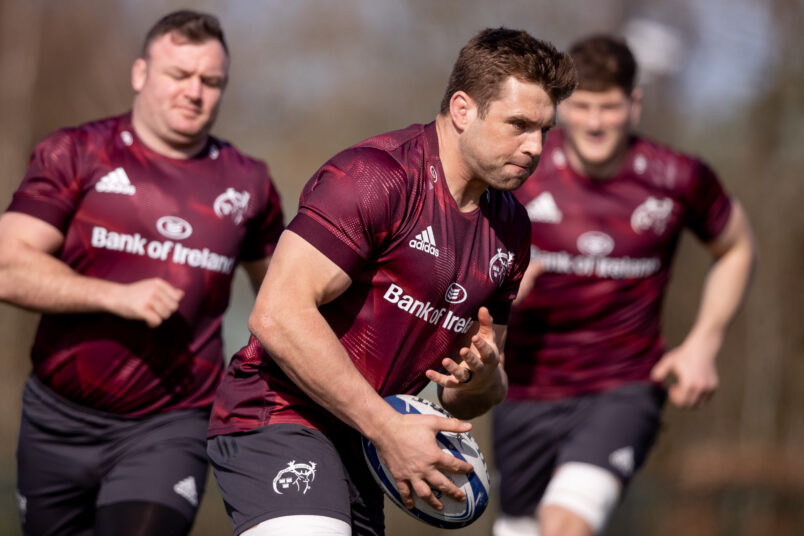 CJ Stander captains the side on his 50th Champions Cup appearance. INPHO/Morgan Treacy

The Munster team has been named for Saturday’s Heineken Champions Cup Round of 16 game against Toulouse at Thomond Park (3pm).

Peter O’Mahony misses out due to the thigh laceration he sustained in last weekend’s game against Leinster while Fineen Wycherley has rehabbed the neck injury he sustained against Scarlets to be included in the match-day squad.

CJ Stander will captain the side at number 8 on his 50th Champions Cup appearance for the province.

There are three changes to the side that started the Guinness PRO14 final in Dublin and they are all in the pack.

Jack O’Donoghue starts at openside for the injured O’Mahony, and he joins Gavin Coombes and Stander in the back row.

In the front row Dave Kilcoyne and Stephen Archer scrum down on either side of Niall Scannell for Saturday’s encounter.

Jean Kleyn and Tadhg Beirne continue in the engine room.

An unchanged backline sees Mike Haley start at full-back with Andrew Conway and Keith Earls completing the back three.

Damian de Allende and Chris Farrell form the centre partnership as Conor Murray and Joey Carbery start in the half-backs. 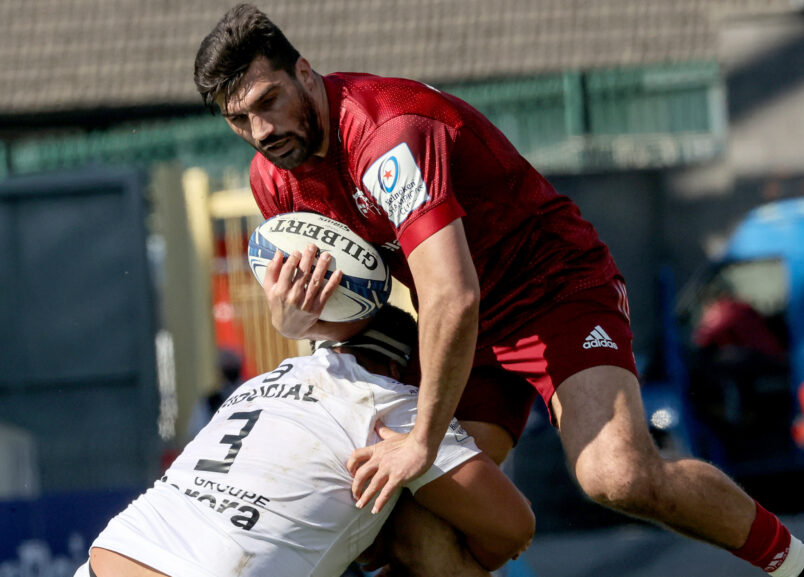 Damian de Allende was one of Munster's top performers. Inpho

Toulouse defeated Munster in a fantastic contest at Thomond Park to advance to the Champions Cup quarter-finals at a sunny Thomond Park on Saturday afternoon.

Keith Earls and Gavin Coombes scored a pair of tries each in a game that could have gone either way but the visitors’ power in the final quarter just about shaded it.

Munster led 26-23 after 65 minutes but a late Toulouse surge gave the visitors victory behind-closed-doors at Thomond.

Toulouse came flying out of the traps and led after three minutes when Chris Farrell was sin-binned for a trip on Pita Ahki and Romain Ntamack kicked the resulting penalty.

14-man Munster managed the next 10 minutes expertly with Conor Murray and Tadhg Beirne prominent in defence before Murray was taken out at the base of a ruck to give Munster their first opportunity after a great phase of attacking play.

Carbery made no mistake to level the scores just as Farrell returned.

Ntamack made it 6-3 to Toulouse after making a good break with with Murray making a try-saving tackle before being penalised for not rolling away.

Munster scored the first try on 24 minutes after a tremendous move that started with Conway claiming a box kick with nearly every Munster player carrying before Damian de Allende made the all-important line break to set up Earls to finish in the left corner.

Earls made it a double when Coombes and Jack O’Donoghue won back possession with de Allende streaking clear before passing for Stander to be dragged down just short.

Murray looped a ball left for Earls to dot down again in the left corner. Carbery was unable to land the touchline conversion but Munster led 13-6 after an absorbing 29 minutes.

A Jack O’Donoghue lineout steal and then a Stander turnover helped Munster march up the field and ended with Carbery kicking his second peanalty to give Munster a 16-9 advantage.

Toulouse hit back with their first try two minutes after the break as Ntamack’s kick-pass gave Matthis Lebel the chance to score in the left corner. Ntamack converted and the sides were level.

Coombes powered over off a five-metre tap on 50 minutes for his 10th try of the season with Carbery converting for a 23-16 lead.

Ntamack then kicked in behind for Cheslin Kolbe with the winger knocking on but was caught by Earls’ hand with the penalty awarded.

Ntamack kicked to the corner and although the lineout looked fairly crooked, the referee was happy to let it go and Toulouse did well to power over. Ntamack’s conversion made it 23-all.

Replacement JJ Hanrahan kicked Munster back in front on 66 minutes after an absorbing spell of possession in the Toulouse 22 with the French side guilty of repeat infringements.

Toulouse were back in front on 68 minutes after Lebel showed great feet to escape down the left wing before passing inside for Dupont to go in under the posts.

Ntamack converted and then kicked a penalty to give Toulouse a 33-26 lead after 72 minutes.

Antoine Dupont was in for the killer Toulouse try with 77 minutes gone. We went to the TMO and when no clear knock-on could be seen, the score was awarded.

Munster kept going and Coombes was over for his second try just past the 80-minute mark with Craig Casey drop-kicking the conversion but time had run out and Toulouse advanced.

Stander and Billy Holland made their final European appearances for the province as the duo retire at the end of the season.

Tadhg Beirne departed with a knock in the first half and will be assessed by the medical team. 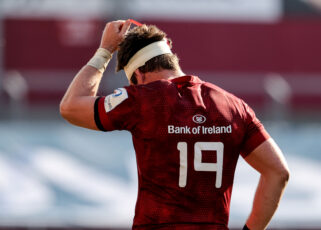 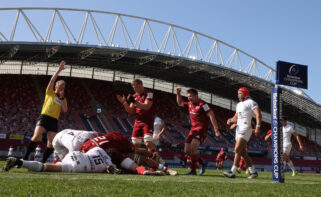 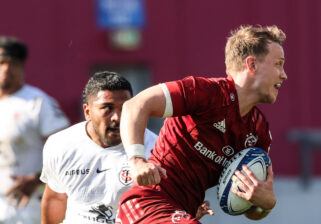 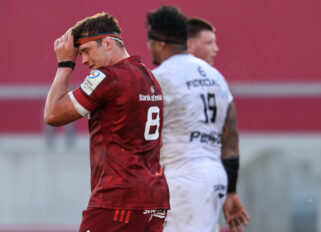 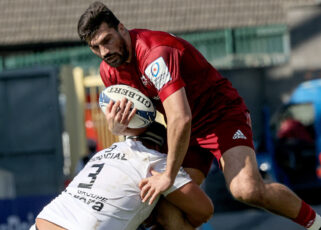 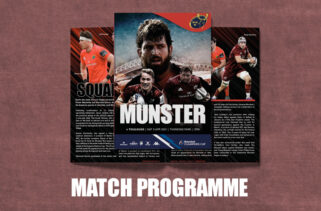 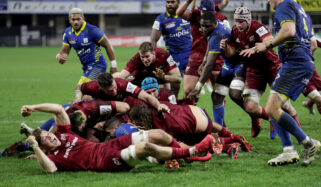 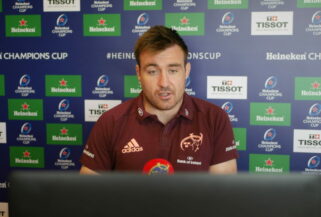 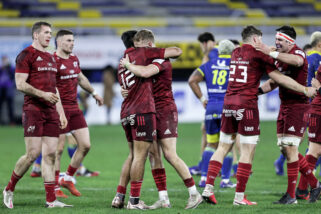 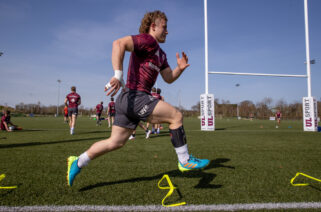 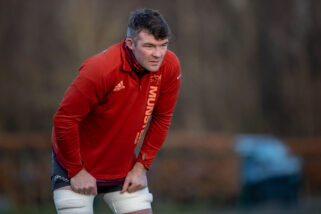 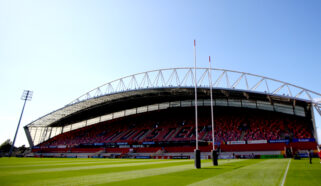