Team Named | Munster Side To Face Castres On Friday Night 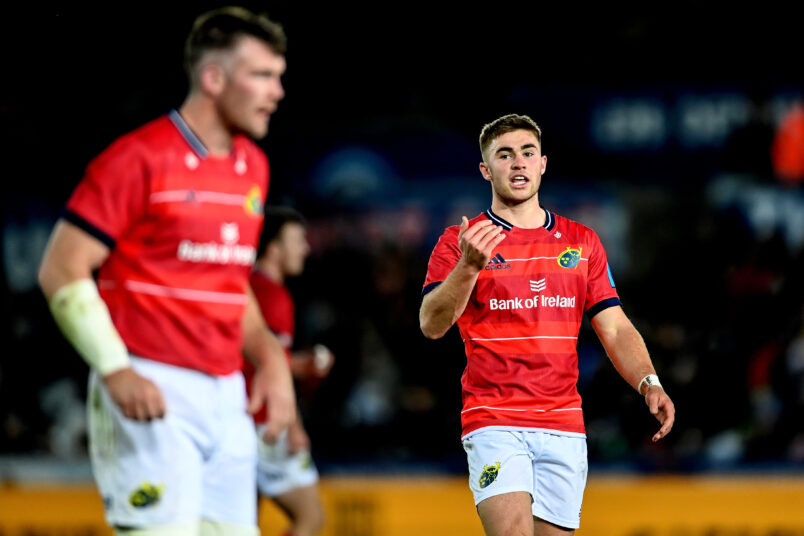 The Munster side has been named for Friday’s Champions Cup clash against Castres Olympique at Stade Pierre-Fabre (8pm Irish time, live on BT Sport). 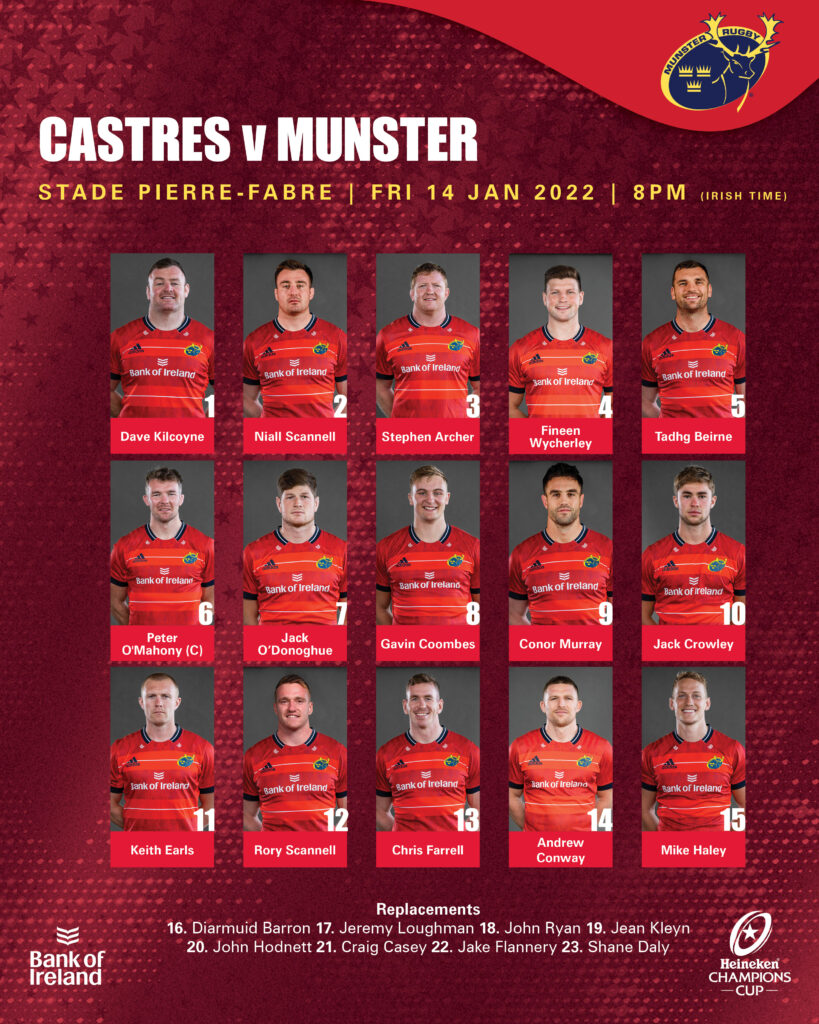 There are five changes to the Munster side that defeated Ulster at Thomond Park on Saturday night.

Captain Peter O’Mahony returns after missing the Ulster win due to a leg strain with Andrew Conway, Keith Earls, Conor Murray and Jack O’Donoghue also coming into the side.

There is a positional switch for last week’s Player of the Match Tadhg Beirne as he moves to lock.

Jack Crowley keeps his place at out-half and starts in the Champions Cup for the first time having made his European debut off the bench against Castres at Thomond Park last month.

Mike Haley starts at full-back with Conway and Earls on either flank.

Rory Scannell and Chris Farrell continue their centre partnership with Murray and Crowley in the half-backs.

The front row of Dave Kilcoyne, Niall Scannell and Stephen Archer is unchanged with Fineen Wycherley and Beirne in the engine room.

Out-half Jake Flannery is in line to make his Champions Cup debut as a replacement with Jean Kleyn also included in the squad after missing out last week due to a knee injury. 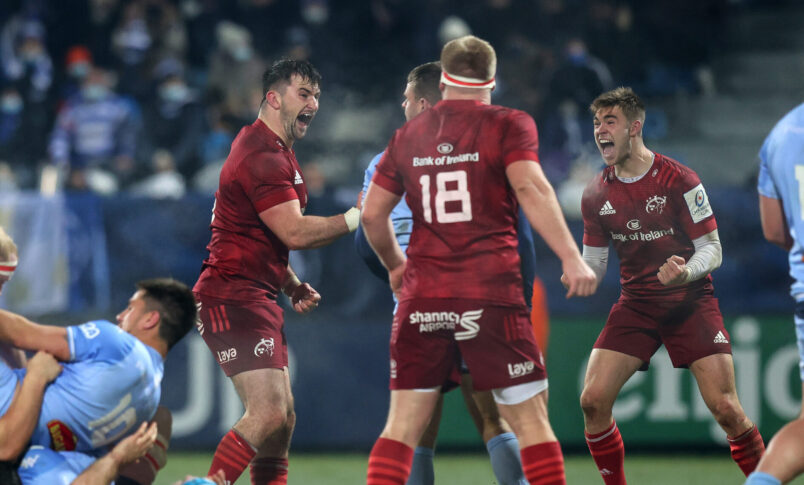 Munster snatched a dramatic win away to Castres in France on Friday night as a Gavin Coombes try on 78 minutes made it three wins from three in the Champions Cup.

Jack Crowley was 100% off the tee with three penalties and a conversion on his first European start.

Craig Casey nearly scored off a Chris Farrell pass on penalty advantage but the ball went forward and Munster went for the corner.

The maul was held up but the ball squirted out to the right man in the right place at the right time as Coombes scooped it up and powered towards the line before stretching every inch to touch down on the whitewash.

It was a deserved victory as Munster played with plenty of attacking intent and came up with the goods in the nick of time.

The game was a kicking battle throughout as Castres cleverly kept Munster pinned back but the visitors kept the error count low in looking to gain a foothold in the game.

Peter O’Mahony was to the fore in a great pack effort in the first half with the Munster captain stealing Castres lineouts and playing his part in disrupting a number of mauls.

Crowley’s first penalty after 10 minutes from 41 metres gave Munster a 3-0 lead before Niall Scannell departed with a shoulder injury as Diarmuid Barron took his place at hooker.

An inventive Munster attack from deep saw Rory Scannell’s Crossfield kick release Earls on the left wing and he gave it outside for Mike Haley whose pass inside found Chris Farrell but he was dragged down.

The ball was recycled and Crowley kicked to Conway on the right touchline with Castres giving away a penalty.

Munster kicked to the corner but Castres stole the lineout and cleared their lines.

The hosts hot the front on 29 minutes after a brilliant outside-of-the-boot dink in behind from Ben Botica was grounded by Thomas Larregain on 29 minutes.

Botica converted to make it 7-3 and the hosts attacked again late in the half with Filipo Nakosi rampaging up the left wing but Mike Haley got back to win the breakdown penalty.

Munster started the second half brightly as went wide to Conway on the right wing who found open ground with a chip ahead before hacking forward but the ball went dead.

A Beirne turnover penalty on 43 continued the moment and great hands from Crowley, Farrell, Earls and Haley released Jack O’Donoghue on the left wing.

The attack was eventually halted by a knock-on but an off-the-ball tackle on Rory Scannell was spotted by the officials and Crowley’s second penalty made it a one-point game.

A Haley break from deep initiated the next attack with Crowley and O’Mahony both offloading before another big carry from Chris Farrell.

Castres conceded another penalty and Crowley gave Munster a 9-7 lead.

Castres weren’t lying down and won a scrum penalty in the Munster 22 on 54 minutes with Botica kicking them back in front, 10-9.

Scrum-half Rory Kockott, an early replacement, was keeping Munster pinned back with his kicking game and a second Castres penalty from Botica on 66 minutes made it 13-9.

Credit to the hosts however as they frustrated Munster once again, steaking the lineout and relieving the pressure.

Beirne’s turnover on 75 minutes gave Munster once last chance though and the pack did the rest with Coombes coming up trumps once again in the final two minutes to clinch a very important win.

Munster have won three out of three in the Champions Cup.

Niall Scannell departed with a shoulder injury in the first half and will be assessed by the medical team.

Jack Crowley made his first start in the Champions Cup.

Munster captain Peter O’Mahony has offered his condolences on behalf of the squad and everyone at Munster Rugby to the family & friends of Mary Immaculate College graduate Ashling Murphy following her tragic death on Wednesday. 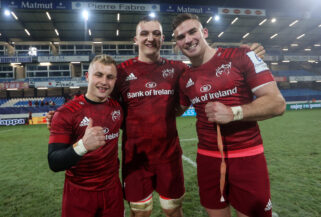 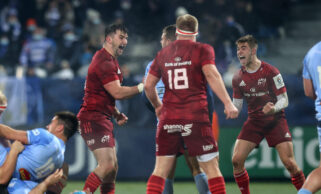 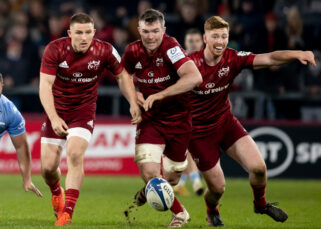 All You Need To Know | Castres Olympique v Munster 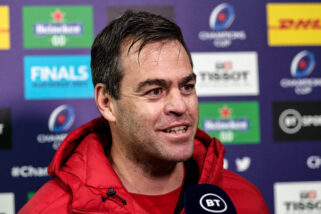