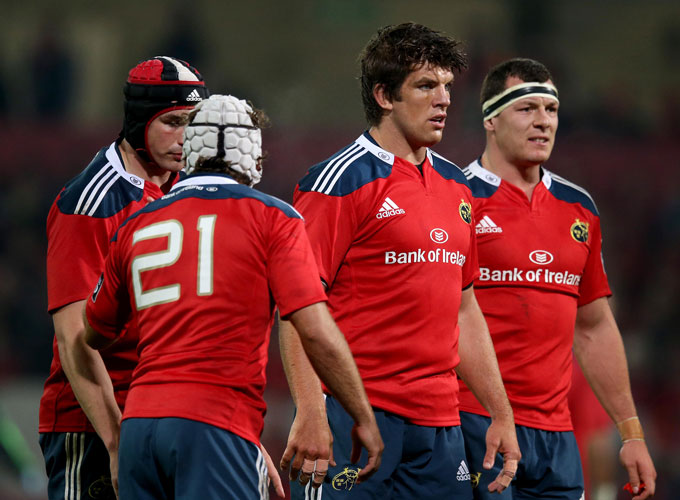 Bolstered by a number of returning internationals, Anthony Foley has named a strong matchday squad to face Ulster tomorrow night at Thomond Park in Round 9 of the Guinness PRO12.

Five personnel changes are made to the starting line-up that earned a bonus point victory last weekend against Newport Gwent Dragons at Rodney Parade, with centre Pat Howard set to make his first start for the province.

One change in the front row see’s BJ Botha promoted from the bench to start at tighthead alongside hooker Duncan Casey and loosehead John Ryan.

Donncha O’Callaghan will once again captain the side and partner Billy Holland in the second row.

In the back row, Robin Copeland moves to 6 with Paddy Butler switching to openside, while CJ Stander comes back into the starting line up at 8.

Duncan Williams is another returning to the starting 15 at scrum half alongside Ian Keatley in the half backs.

Having made his debut from the bench last weekend, centre Pat Howard will make his first start for Munster as he lines up outside Denis Hurley in the midfield.

In the back three, Gerhard van den Heever comes in on the right wing with Ronan O’Mahony on the opposite flank, while JJ Hanrahan makes his second consecutive start at full-back.

Three returning internationals – Dave Kilcoyne, Tommy O’Donnell and Felix Jones – are named on the bench. As Cathal Sheridan is to undergo further investigation on a forearm injury picked up in the Dragons game, in-form Garryowen scrum half Neil Cronin is included amongst the replacements.

Tickets from just €;7 for Juniors and €;23 for Adults can be purchased online here, at the Munster Rugby Ticket Offices in Musgrave Park and Thomond Park, or by calling 0818 719 300. 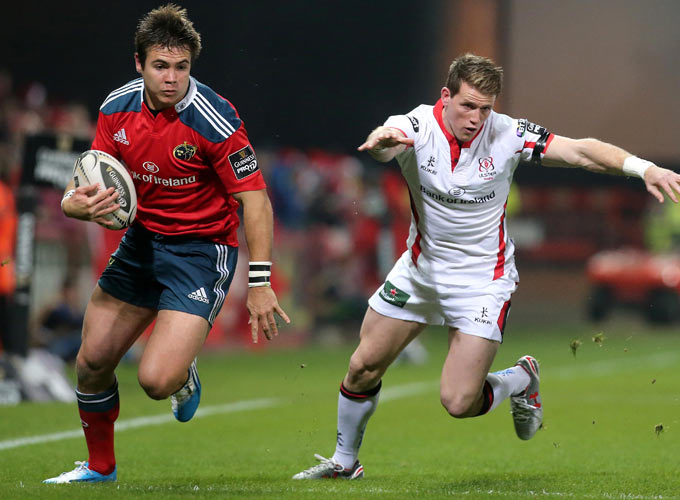 Munster just hung on in a tense Thomond Park finish for a one-point victory against Ulster tonight, winning 21-20 to move top of the Guinness PRO12 table.

Ulster opened the scoring with an Ian Humphreys penalty after three minutes and they were clearly the stronger side in the initial 20-minute period with indiscipline proving a worry for Munster.

On making his first start for the province Pat Howard was an early replacement five minutes later after a collision with fullback JJ Hanrahan, and Andrew Smith was introduced to the back-line.

Munster reduced the margin further with a try from man-of-the-match Robin Copeland after 29 minutes.

It was Duncan Williams and Ronan O'Mahony that instigated the attack with the scrumhalf sending a reverse pass to the flying winger who swerved around the Ulster defence before being stopped short of the five metre line. Williams was at the breakdown quickly and released the ball wide with Keatley and Hurley playing their part before Copeland ran over for the first try of the game.

Keatley missed the conversion and it remained 8-12 until the break despite a clear-cut scoring opportunity minutes later.

Powerful winger Gerhard van den Heever broke through the Ulster defence and when the ball was flashed wide with a numbers advantage Keatley was unable to find his target and Botha or Stander missed out on a certain try before the break.

In the second half Duncan Williams put Munster ahead for the first time three minutes in after he took a solo run off the back of a poorly controlled Munster scrum. He held off his opposite number Paul Marshall and dived over in the corner for Munster's second try. Keatley added the difficult touchline conversion to put Munster ahead by three.

Two successive penalties from Keatley increased the tally and with 21 unanswered points the attacking momentum continued with van den Heever again causing trouble for the Ulster men's defence. He linked well with Keatley to bring play into the opposition 22 before JJ Hanrahan stretched for a possible third try. A Stuart Olding tackle and TMO decision denied the advantage.

Ulster fought back when Munster were reduced to 14 men after Stephen Archer was binned for taking the support player out in the lineout. The Northerners turn of momentum led to a dramatic finish when Humphreys added his side's fifth penalty and they moved within six points with 8 minutes remaining.

Making use of the numerical advantage Neil Doak's men continued to attack with their lineout and maul proving effective and Nick Williams crashed over for the visitors try on the 79th minute.

Munster thought it was all over but the men in red escaped defeat when Humphreys missed his first shot at goal with the conversion and Anthony Foley's charges held on to claim a one-point victory. 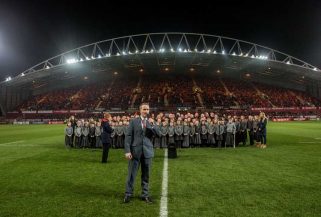 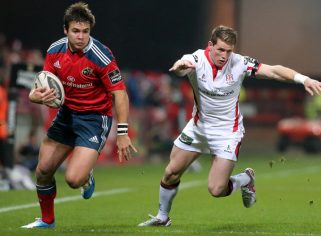