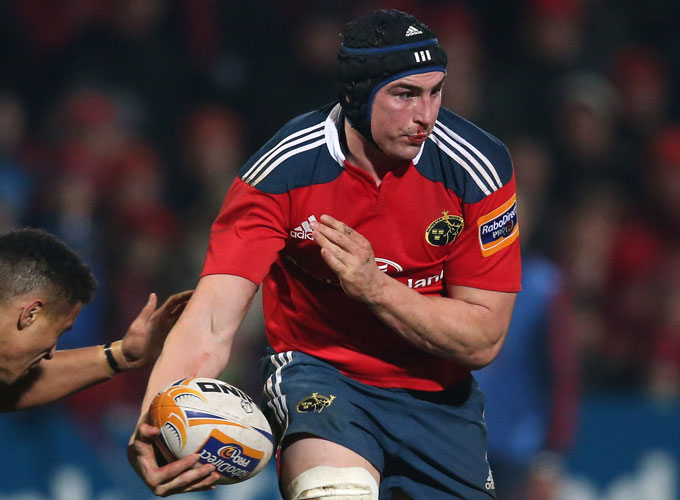 Donnacha Ryan, Tommy O’Donnell and Felix Jones all return from Ireland camp to start for Munster’s trip to Ospreys on Sunday (ko 4pm).

Dave Kilcoyne has also been released for the RaboDirect PRO12 clash and is named on the bench with Head Coach Rob Penney making six changes to the team that beat Zebre 36-8 last weekend.

James Downey comes into the side to make his 40th Munster appearance with Casey Laulala drafted into the starting XV to form a solid centre pairing.

Andrew Conway starts on the right wing in place of Gerhard van den Heever and Ian Keatley shifts from centre to out-half with Cathal Sheridan maintaining his place at scrum-half.

Jones starts at full-back with Simon Zebo, who has four tries in his last three appearances, on the left wing.

Dave Foley comes into the team to partner Ryan in the second-row with James Coughlan captaining the side from no.8. Tommy O’Donnell and Sean Dougall, making his first start since injuring his ankle against Connacht in December, complete a dynamic back-row.

In the replacements, Young Munster’s Ger Slattery will be hoping for a repeat of last week’s two-try performance off the bench with Irish internationals Kilcoyne and Stephen Archer completing the front-row cover.

Munster face Ospreys at the Liberty Stadium on Sunday afternoon at 4pm. The game will be televised live on S4C with updates here. 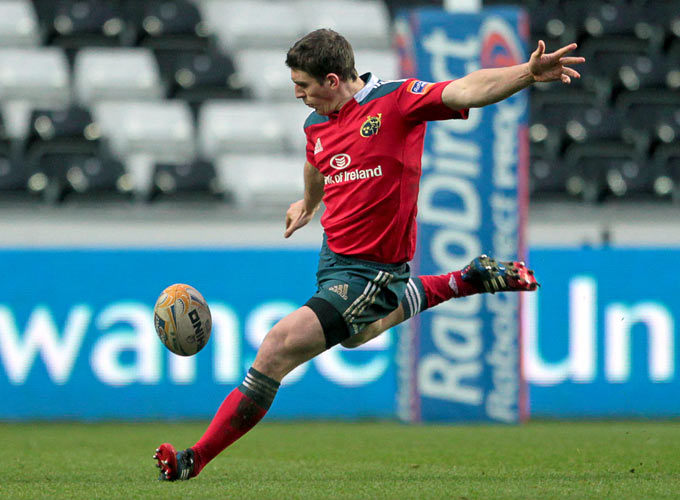 Munster secured an impressive 25-11 win away to Ospreys today with Sean Dougall, Simon Zebo and James Downey all scoring tries.

Sean Dougall opened the scoring after 5 minutes when he claimed the spoils off a driving lineout and Keatley added the extras to give Munster a 7 point return for their opening attacking period.

The out-half followed up with a successful penalty 8 minutes later, awarded off a dominant Munster scrum, and the James Coughlan captained side led by 10 points after the opening quarter.

Moments later Munster were caught offside and Ospreys fullback Sam Davies stepped up for the penalty, kicking his side's first points after 17 minutes.

But Keatley was back on kicking duty minutes later and re-stored the 10-point advantage after the home-side were penalised at the breakdown.

Davies then missed an opportunity to reduce the gap again when his shot at goal struck the upright after 33 minutes but sloppy defending from Munster allowed centre Ashley Beck to dart over the line in the next attacking phase.

The young kicker failed to add the extras and a subsequent penalty in the 40th minute, and Ospreys trailed 13-8 at half-time.

Munster opened the second forty with another early score after Simon Zebo scooped a loose ball to break away for an unopposed run in for Munster's second try and the province moved ahead by ten once again.

Keatley was on form with a controlled kicking display allowing Munster to pile the pressure on at the lineout, and the pack was equally impressive come scrum-time, but Ospreys continued to challenge and threaten the Munster defence.

After 59 minutes hooker Scott Baldwin charged for the Munster line and touched down only to be ruled out by the TMO for a double movement.

But then Davies did reduce the deficit after he added his second penalty in the 66 minute when Munster were penalised for not rolling away.

A change at 10, when Hanrahan replaced Keatley for a blood injury, sparked the next score off a Munster lineout. JJ skipped through the Ospreys defence and offloaded to James Downey who powered over for his first ever Munster try, stretching for the line under the posts, with JJ kicking the extras.

The Ospreys frustration culminated in replacement Ryan Jones receiving a yellow card with 2 minutes remaining, and when finishing with 14 men the home-side were unable to deny Munster the 25-11 victory. 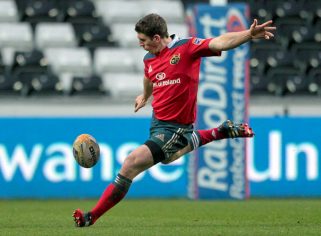