Side Named For Treviso 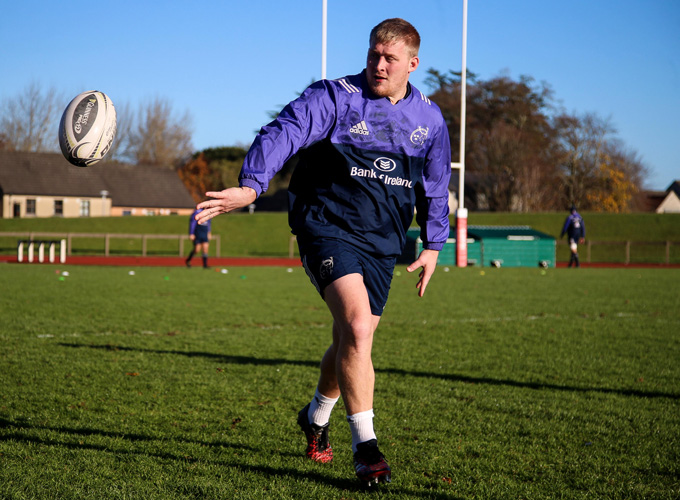 Director of Rugby Rassie Erasmus has rung the changes for tomorrow’s Guinness PRO12 encounter with Treviso at Thomond Park, ko 2pm. Tommy O’Donnell continues as captain with seven changes made to the side that defeated the Maori All Blacks.

Among the returning international contingent for the round 9 clash are Dave Kilcoyne, John Ryan, Jack O’Donoghue, and Billy Holland.

Dave Foley and Sammy Arnold have overcome their respective elbow and knee injuries to take their places in the starting line-up with the latter to make his competitive debut.

Named amongst the replacements, prop Thomas du Toit and scrum half Angus Lloyd are included in their first matchday squads with Jean Kleyn also included after successfully rehabbing an ankle injury.

An all-new front row sees Kilcoyne and Ryan start on either side of hooker Rhys Marshall who makes his first start in the red jersey.

In the second row Foley returns to partner Darren O’Shea in the PRO12 for the first time, while in the back row, O’Donnell reverts to openside, O’Donoghue comes in at blindside with Robin Copeland continuing at number 8. O’Donnell draws ever closer to a century of appearances in the Championship and will make his 99th PRO12 appearance this weekend.

Duncan Williams and Tyler Bleyendaal resume their partnership in the half backs with another new pairing seen in midfield where debutant Arnold starts alongside Jaco Taute.

There are no further changes with Ronan O’Mahony, Darren Sweetnam and fullback Andrew Conway again forming the back three. 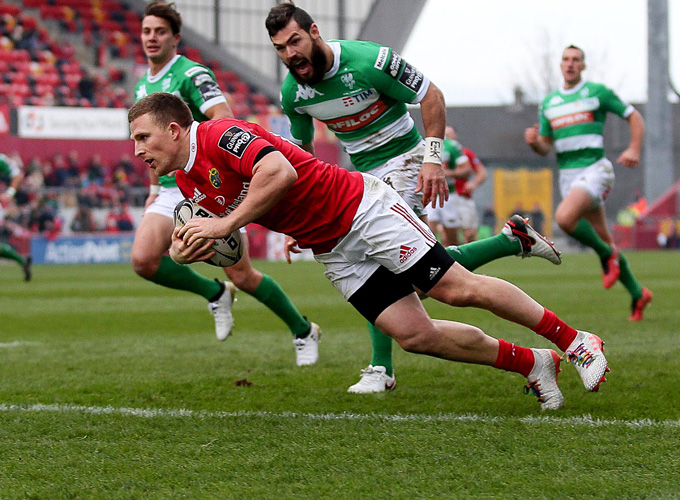 Those who braved the cold conditions at Thomond Park this afternoon will have been glad they did as Munster excited in crossing for seven tries and comprehensively defeated Treviso in round 9 of the Guinness PRO12 this afternoon.

Soaking up the early pressure from Treviso, Rassie Erasmus’ men did well to concede just three points before hitting their stride and running in three opening half tries through Robin Copeland and an Andrew Conway brace.

Munster picked up from where they left off upon the resumption, Darren O’Shea securing the try bonus point on 42 minutes with another brace, this time from Ronan O’Mahony, and an Alex Wotton try well and truly putting the Italians to the sword by the time 80 minutes came around.

The visitors held most of the early possession but got little change out of the Munster defence which drove the Italians back to the 10 metre line during their first sustained attack in the Munster 22.

Treviso were however rewarded for their early efforts when Munster failed to release the tackled player and, with the help of the upright, former Leinster man Ian McKinley drew first blood in slotting a three-pointer.

But from there it was all Munster, Tyler Bleyendaal levelling affairs with a penalty prior to three unanswered tries before the interval.

In the first instance, after their dominant maul was held up over the line, Munster then decimated the Italian set-piece in the subsequent 5 metre scrum, driving the visitors back over the tryline with Robin Copeland touching down for Munster’s first. Bleyendaal converted.

The Munster playmaker – and man of the match – was instrumental in the next two scores, deftly chipping for Ronan O’Mahony who in turn kicked ahead for Andrew Conway to bag Munster’s second, and it was the same trio who combined for Munster’s third.

A solid Munster scrum in their own half provided Bleyendaal with the time and platform to weight a perfect kick for the charging O’Mahony on the far left wing who executed deceptive right to left jink that saw off Treviso’s cover defence before offloading to Conway for his second of the afternoon on 36 minutes.

22-3 at the interval and Munster in full control.

Just over two minutes into the second half and Munster had secured the try bonus point. In an excellent team try, back and forwards alike contributed to a patient build-up in which Munster went through the phases with Darren O’Shea crashing over for his first Munster try. Bleyendaal made it a full seven point return.

Proceedings went somewhat flat in the subsequent passages of play and despite Munster’s overall dominance throughout this encounter, Erasmus will not have been happy with Munster’s discipline at times, especially with a rising penalty count that verged on yellow card territory.

20 minutes to go and Munster kicked back into gear, an excellent O’Shea lineout steal and Copeland break allowing the Munstermen exit their own half and ultimately bring play up to the Treviso 22. A maul and a couple of recycles later, two swift passes to the left wing saw O’Mahony in for his first and there would soon be a second for the speedster.

Before that, Alex Wootton’s sprightly performance upon his introduction saw him make an excellent break out wide to cross for his first Munster try – replacement Keatley converting – and the icing on the cake came from O’Mahony after Copeland peeled off a lineout maul and executed a two-on-one to send the winger in for his brace and Munster’s seventh try in total.

Munster comprehensively continue their winning ways on a 46-3 scoreline.

PRO12 round 9 round up: The win sees Munster top the PRO12 table ahead of next Friday night’s trip to 2015 champions Glasgow Warriors.

Sammy Arnold, Thomas du Toit and Angus Lloyd made their competitive debuts for the province while Rhys Marshall made his first start.

Darren O’Shea and Alex Wootton scored their first tries in the red jersey.

Speaking after the game, Rassie Erasmus confirmed that captain Tommy O'Donnell left the game early with a dead leg. 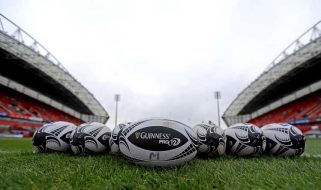 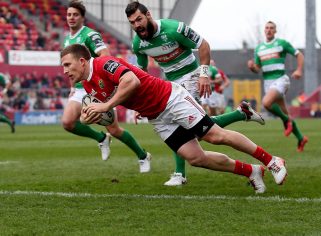