Both changes are made in the front row and see James Cronin and BJ Botha come in at loosehead and tighthead respectively while Duncan Casey remains at hooker.

Following his debut inclusion in Joe Schmidt’s Ireland squad for the upcoming Guinness Series, Dave Foley will start alongside Paul O’Connell in the second row.

In the back row Peter O’Mahony captains the side from 6 with Tommy O’Donnell at 7, and another man of the match performance last weekend sees CJ Stander continue at 8.

Conor Murray and Ian Keatley remain at half back as do Denis Hurley and Andrew Smith in the centre, while Simon Zebo, Andrew Conway and Felix Jones once again make up the back three.

The last remaining tickets can be purchased from €;30 online here, at the Munster Rugby Ticket Offices in Thomond Park and Musgrave Park, or by calling 0818 719300.

For now tickets will be on sale outside the ground on matchday.

While Thomond Park’s new Fan Zone Plaza, the ideal meeting point for fans both pre and post-match will be open from 5pm.

Munster have opened their European Champions Cup account at Thomond Park on a winning note following an impressive 14-3 win over Saracens tonight.

The opening 40 saw Munster with most of the possession, mainly due to excellent work at the breakdown by a dominant Munster pack. However lack of precision was to cost Munster dearly in the first half as they saw little return for their efforts on the scoreboard. With the hard yards made, knocks-ons often halted Munster’s charge for the line.

Despite their lack of possession, it was the visitors who had the first kick at goal after a great run from Denis Hurley saw him isolated and penalised for holding on – Saracens centre Marcel Bosch sent a long range effort from half way to the right and wide.

The Munster pack continued to display serious intensity, ably marshalled by Man of the Match Conor Murray, and using the maul on a number of occasions to get inside the Saracens 22. When the visitors infringed on 12 minutes, Ian Keatley had his first chance for 3 points.

With the kick coming off the post, the sprightly and impressive Andrew Conway gathered but Saracen's Jamie George was alert to the danger and did enough to prevent the winger from running in under the posts for Munster's opening try.

Munster continued to wear down the opposition up front, presenting the backs with a decent platform from which to attack and Conway was again unlucky not to cross after a slip while gathering the ball just metres from the line.

The pressure eventually told when Saracens were penalised at the maul and the boot of Keatley got Munster off the mark on 27 minutes.

Saracens' reply could have been swift, were it not for a bad miss from Owen Farrell just minutes later when Munster brought down the maul during Saracens' first visit to the Munster 22.

With momentum beginning to swing the way of Saracens, the province coughed up another penalty on 37 minutes and this time there was no mistake from Farrell.

Despite the visitors building up a head of steam, the Munster defence held firm and good work from BJ Botha at scrum time gave the hosts the chance to retake the lead with another penalty on the stroke of half time.

With Keatley off target it remained 3-3 at the break.

Saracens' purple patch continued from the restart, well executed kicks from Farrell pinning Munster back in their own half and had a crossfield kick from Chris Ashton bounced more favourably for David Strettle, the visitors may well have been in for the opening try of the game.

Munster continued to soak up the pressure, but at no point faltering, denying their opponents any return on the scoreboard.

Perhaps the turning point of the second half was the game’s only sin binning. Following a dangerous tackle on CJ Stander, replacement prop Rhys Gill was lucky to only see yellow on 51 minutes.

Soon after, Munster retook the lead through a penalty from Keatley and the momentum was back with Anthony Foley’s charges.

They say things come in threes, and that was certainly the case for Conway. Unlucky not to score on two
occasions in the opening half, good work from the Munster pack brought Munster deep into the opposition 22 and when the ball went wide to Conway, the winger did well to touch down, only for the TMO to disallow the try after he bizarrely adjudged the ball had been knocked on.

Saracens' relief was short lived though as Munster still had the advantage and from the subsequent penalty, Duncan Casey found Dave Foley in the line out who in turn fed Dave Kilcoyne whose first action of the game was to score his second try in as many weeks as Munster mauled their way over the line.

Missing the conversion, Keatley soon made amends when he kicked his second drop-goal in the space of week for Munster. That was to become the final score of the game as the out-half’s final penalty attempt also went just wide of the posts.

Try as Saracens might for the remainder of the game, they got little change from the Munster defence, often knocking on and allowing Munster to clear their lines from a strong scrum set piece.

A well-managed performance from the home side saw them soak up Saracens' pressure in a disciplined and composed fashion, also capitalising on momentum once it swung their way.

In doing so Munster also made full use of their bench with Robin Copeland and Eusebio Guinazu making their first European appearances for the province. 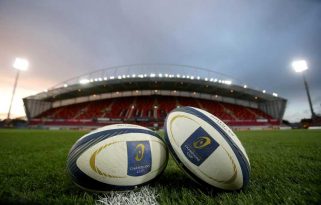