Side Named For Ospreys 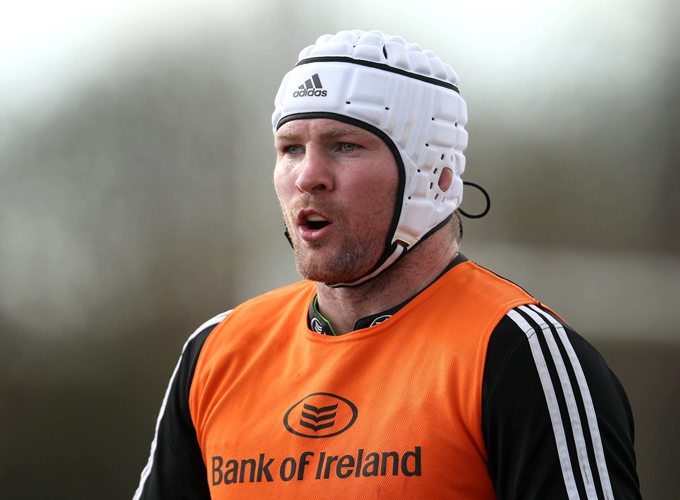 Head Coach Anthony Foley has named his side to face Ospreys at the Liberty Stadium in Round 17 of the Guinness PRO12. Denis Hurley is again named as captain while Donnacha Ryan is included in a matchday squad for the first time this season.

In the tight five, Dave Kilcoyne comes into the starting front row at loosehead alongside Eusebio Guinazu and BJ Botha, while Donncha O’Callaghan and Billy Holland form the second row partnership for the fourth successive game.

The back row sees Dave O’Callaghan return at 6 with Sean Dougall and CJ Stander continuing at 7 and 8 respectively.

There are no changes in the half backs and midfield with Duncan Williams, Ian Keatley, captain Denis Hurley and Keith Earls all retaining their starting positions.

With JJ Hanrahan remaining in situ at full-back, Felix Jones comes into the back three on the right wing alongside Ronan O’Mahony on the opposite flank.

Following the successful rehabilitation of a right foot injury sustained against Benetton Treviso in March of last year, the bench sees the welcome inclusion of Donnacha Ryan in a matchday 23 for the first time this season.

This game will be televised on Sky Sports while you can also follow the action on Twitter: @munsterrugby #OspVMun

Bad Day At The Liberty 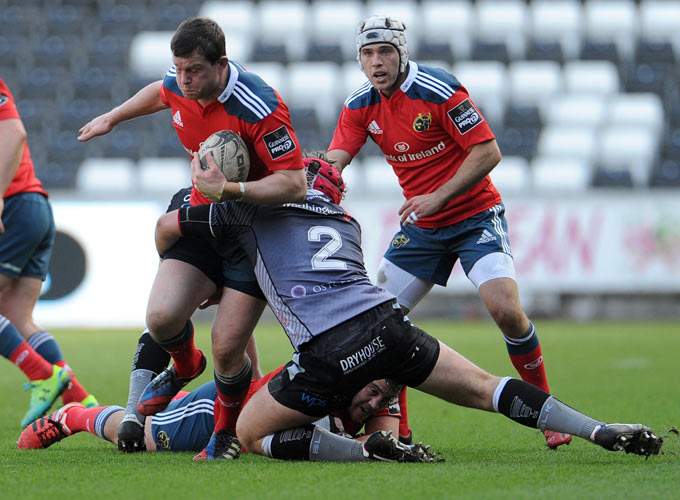 Post-match, a hugely disappointed Anthony Foley was baffled when asked to identify where today’s performance came from.

There were no excuses handed out as the Head Coach listed poor decision making, ball handling and ill-discipline as the main factors that contributed to the below-par performance.

Munster now come away empty handed from the round 17 fixture after suffering a 26-12 defeat to Ospreys at the Liberty Stadium.

With a first half showing of ill-discipline and inaccuracy Munster never fired right from the off and with the penalty count racking up against the men in red, Ospreys, through outhalf Sam Davies, took full advantage of the mounting mistakes.

The home-side held the majority of possession and territory, and deservedly held the lead at half-time after Davies kicked 3 penalties and a drop-goal, and number 8 Dan Baker added a try. The Welsh outfit didn’t concede a single penalty in the opening 40 whereas Munster were pinged on 8 occasions before the break.

It was inevitable a man would end up in the bin and it was no surprise when Dave O'Callaghan received a yellow card for a high tackle with ten minutes remaining of the opening half. During that period of numerical advantage the home-side were quick to capitalise, scoring 11 points.

Davies, who had already kicked two successive penalties in the opening 20, presented Baker with the ball after seeing numbers out wide and the unmarked number 8 ran in for the opening try. The Welsh out-half missed the conversion, his only falter of the afternoon, but replied with a further penalty and drop-goal in the closing minutes.

Three second half penalties from the boot of Davies again were enough to keep his side out of sight despite Munster adding two late tries. John Ryan and Keith Earls both scored, with Ian Keatley adding the latter's conversion.

With 20 minutes to go Donnacha Ryan made a return to action for the first time since March last year after recovering from an awkward toe injury. He provided the support when the lineout maul ended with John Ryan crashing over the line for his first try for the province with 9 minutes remaining.

Keith Earls dotted down in the same corner 2 minutes later completing a well worked move instigated by a an impressive offload from Stephen Archer, but the late come-back was all too little, too late for the province as they went down 26 points to 12. 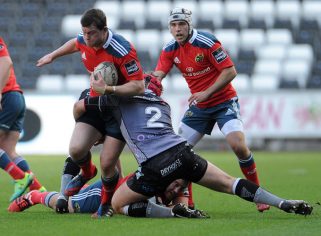 Bad Day At The Liberty