Side Named For Glasgow 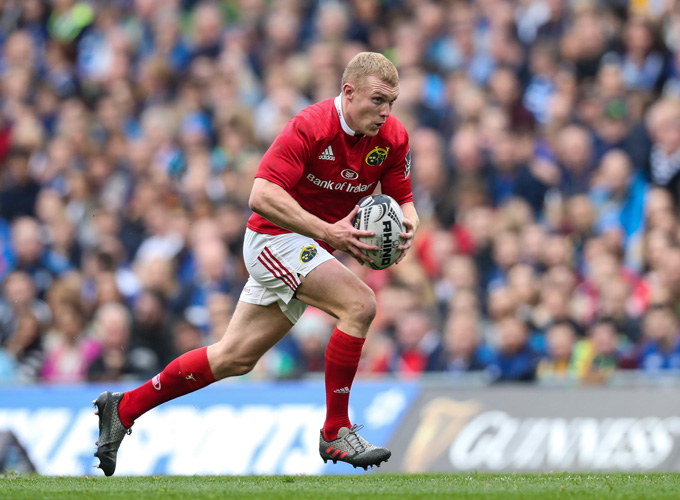 Just one change is made from the side originally named to face Racing 92 for tomorrow’s European Champions Cup encounter with Glasgow Warriors at Thomond Park – ko 1pm.

Having completed his return to play protocols for a concussion sustained against Leinster earlier this month, Keith Earls returns to the matchday squad and starts on the left wing.

Tyler Bleyendaal and Darren Sweetnam will make their European debuts while academy prop Brian Scott could also do so after being named on the bench.

Our late friend, Head Coach and former captain Anthony Foley will also be remembered by both players and supporters at tomorrow’s game, details of which can be found here.

As a mark of respect to Anthony who made the Munster number 8 jersey his own for so many seasons, the number 8 jersey will be retired for tomorrow’s game with CJ Stander to wear number 24.

In squad news, the province can confirm that scrum half Tomás O’Leary has joined French Top 14 outfit Montpellier on a four month loan agreement.

Last remaining tickets can be purchased online here or from the Munster Rugby Ticket Offices at Thomond Park and Irish Independent Park. 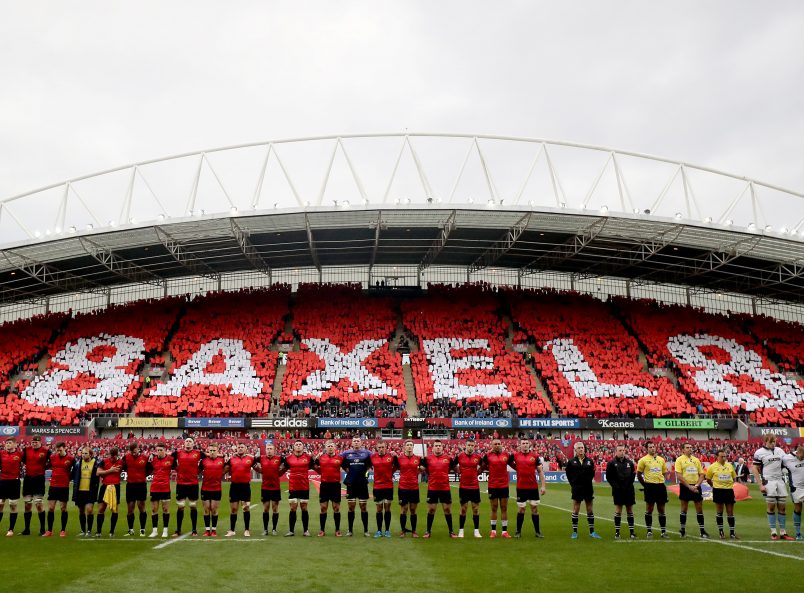 Munster produced a performance for the ages as they paid tribute to Anthony Foley in the best possible way, with an outstanding, committed performance against Glasgow Warriors.

First-half tries from Tyler Bleyendaal, Jaco Taute and Simon Zebo were complemented by three conversions and a penalty by Bleyendaal after an incredible first 40 as Munster led 24-3 at half-time.

The performance was so good, you’d nearly forget that Munster had been reduced to 14 midway through the half after Keith Earls had been sent off.

A penalty try was earned by the Munster scrum early in the second half to increase the lead and, while Glasgow hit back with tries from Pat McArthur and Mark Bennett, a late Rory Scannell try sealed a stunning win.

It was an occasion fraught with emotion following the sudden passing of Anthony Foley in France just six days ago.

That the Munster players were able to take to the field at all was an achievement in itself and the home support at a packed out Thomond Park were desperate to get behind the team from the off. As the players retreated to the dressing rooms after their warm-up they were given a rousing reception.

When they returned, with the name Axel stitched underneath the crest of their jerseys, an emotional minute’s silence was held in Foley’s honour with the home fans in the West Stand holding a mosaic for the Munster legend.

Ahead of the game, the question was, under the circumstances, how do you produce a performance befitting of a man who had achieved so much and given everything to the province? That question was answered by a Munster 23 that played with incredible commitment, bravery and no little skill – much like a certain number 8 who graced the Thomond Park pitch on so many occasions.

Determined to honour their fallen Head Coach, the hosts started at full throttle and Bleyendaal dotted down first after four minutes. The New Zealander sliced through a gap in midfield and, having been stopped initially, forced his way over the line with support from Conor Murray. Bleyendaal himself slotted the tricky conversion right through the middle and Munster led 7-0.

Taute, on his European debut, then nearly intercepted a Glasgow pass in midfield but the ball went forward as he shipped a high tackle with Finn Russell kicking Glasgow’s first points to make it 7-3 shortly afterwards.

That was just a brief blip, however, and it was all Munster from then on as they went further in front when the indomitable CJ Stander, playing number 8 but wearing the 24 jersey in honour of Axel, won a turnover in the visitors’ 22 and Rory Scannell put Taute away in the left corner for try number two with Bleyendaal adding the very difficult extras with aplomb.

It seemed like Munster were playing with 16 men on the pitch but they were down a man midway through the half after Earls was sent off for a dangerous tackle on hooker Fraser Brown with Russell marginally wide with the resulting penalty.

The reply was immediate as the Munster pack powered their way through the Glasgow scrum for a penalty with Bleyendaal slotting over again from just outside the 22 to make it 17-3.

Russell was then unlucky to see his raking kick bounce just on the wrong side of the corner flag, allowing Munster a great attacking platform with a scrum 10 metres inside the opposition half.

Scannell glided through a gap and passed to Zebo on the left wing and the Cork man showed great determination to ground despite a super recovery tackle by Stuart Hogg.

It was a nervous wait as referee Jerome Garces consulted with the TMO but the score was awarded with the impeccable Bleyendaal slotting over another touchline conversion to make it 24-3 and that’s how it stayed until the interval.

There was no let-up at the start of the second half and Munster scored their fourth try through the pack as they powered their way through the Glasgow scrum on a number of occasions before a penalty try was awarded by Garces with Bleyendaal’s conversion making it 31-3.

Munster were playing with an intensity that would be impossible to maintain and Glasgow were quick to punish them when they began to flag slightly after the hour as McArthur touched down after a rolling maul with Hogg reducing the deficit to 21.

The gap was down to 14 when Bennett was able to skate over after a Glasgow breakout with Darren Sweetnam initially making a miraculous recovery tackle but the ball was recycled and Bennett went in under the posts.

Hogg added the conversion and it looked like Munster would be hanging on towards the end but, on this day of all days, they weren’t to be denied and Murray sent Scannell in for a fifth try in the left corner on 75 minutes left to seal the win.

Keatley added the touchline conversion to make it 38-17 as Munster signed off a fitting performance to honour Anthony Foley.

At full-time, the squad sang ‘Stand Up And Fight’ in the middle of the pitch with Foley’s young sons Tony and Dan to cap off a moving occasion at Thomond Park.

The game saw Tyler Bleyendaal, Jaco Taute, Darren Sweetnam and Brian Scott make their European debuts. Duncan Casey injured his knee after coming on as a replacement and will be assessed by the medical team. 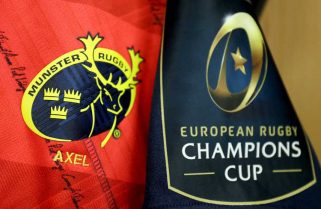 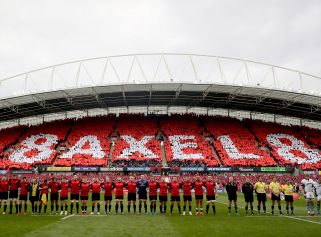