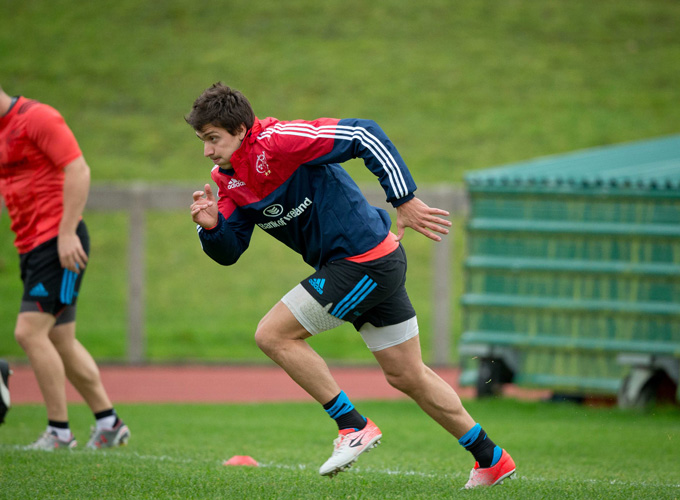 Head Coach Anthony Foley makes six changes from the side that defeated Treviso in the Champions Cup for Saturday’s return to Guinness PRO12 action against Connacht at Thomond Park – KO 5.15pm. James Cronin will win his 50th Munster cap with Lucas Gonzalez Amorosino set to make his first start.

Cronin is one of two changes in the front row with Niall Scannell making his first PRO12 start of the season at hooker, while BJ Botha continues at tighthead.

Donnacha Ryan again partners Mark Chisholm in an unchanged second row, while in the back row, the return of Robin Copeland at 8 sees captain CJ Stander switch to 6 with Jack O’Donoghue remaining at 7.

Tomás O’Leary comes in to partner Ian Keatley in the half backs and a positional change for Keith Earls sees him move into midfield alongside Francis Saili who switches to the inside channel.

The final two changes are seen in the back-three with PRO12 debutant Lucas Gonzalez Amorosino and the returning Gerhard van den Heever starting on the left and right wing respectively.

In completing the starting XV, Andrew Conway will make his fifth start at full-back this season.

Should he feature from the bench, Kevin O’Byrne will make his first PRO12 appearance of the current campaign.

Three Match Pack
Why not incorporate this game with a Champions Cup fixture and another PRO12 game of your choice (not including Leinster)? Match Packs start from just €;45 and also save you 10% across the cost of all three tickets. Click here to start building yours. 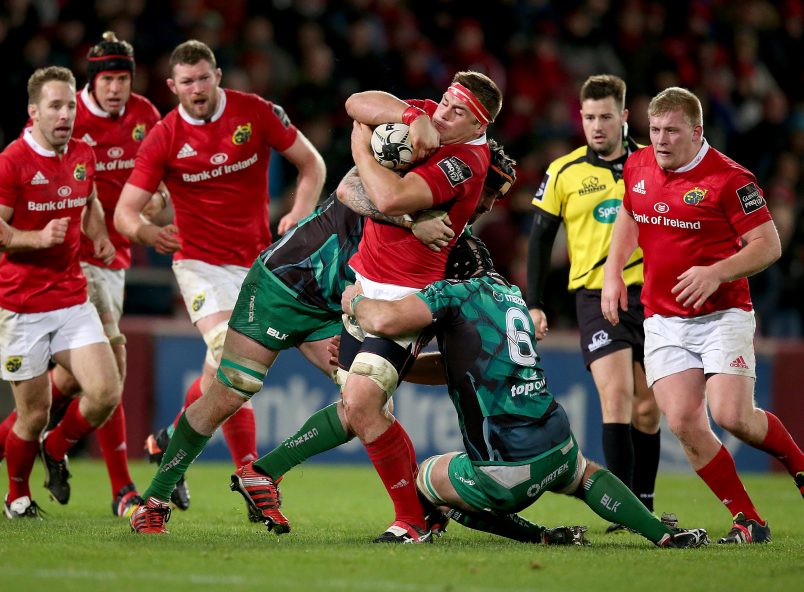 Connacht recorded their first Thomond Park win in 29 years and deservedly held on to their top of the table spot with an 18-12 victory over Munster in the PRO12 this evening.

The westerners used possession to their advantage and took their opportunities well in claiming their historic win while Munster’s opening half defensive effort and number of turnover balls proved costly.

Munster’s only score of the opening forty came from hooker Niall Scannell on his first start of the season while Connacht led at the break thanks to a Tiernan O’Halloran try and the boot of Craig Ronaldson.

A second half display that ended with man-of-the-match Bundee Aki diving over in the corner sealed the deal for the visitors and only for the missed conversion Munster held on for a losing bonus point.

The visitors opened the scoring when Munster were penalised for a high tackle after 11 minutes and Connacht number 12 Craig Ronaldson stepped up to kick his side’s first points against a strong wind.

Six minutes later Munster were caught napping inside their 22 and winger Tiernan O’Halloran took full advantage running in a solo effort to score the first try of the game. With the missed tackles racking up in the opening period Munster were somewhat lucky to have only conceded one try at that stage. An earlier effort from lock and former Tralee RFC man Ultan Dillane was just held up on the line.

The margin was reduced on the 20 minute mark after a successful rolling maul ended with Niall Scannell scoring his first Munster try. After a penalty advantage Ian Keatley opted to kick for the corner rather than take the shot at goal and a strong set-piece provided the scoring platform. The outhalf’s attempt at goal edged wide and the score remained 5-10 until the interval.

A livelier second half saw Munster produce more direct running rugby and there was nothing between the sides up until the 58th minute when Denis Hurley was penalised for not releasing, and Ronaldson added his second penalty to extend the margin to eight points.

The thrilling derby action continued and Munster were back within a single score after referee Ben Whitehouse awarded a penalty try. The Connacht Captain John Muldoon made an early tackle on Andrew Conway who was in sight of the try line and looking to take the pass from Ian Keatley.

The Munster number 10 kicked the conversion to make it a one-point game with twelve minutes to go.

However, it was the visitors who pulled ahead once again when Robbie Henshaw broke the Munster defence and offloaded out wide to Aki who dived over for the final score of the game and a deserved 18-12 victory for the visiting province.

Round 8 PRO12 round-up: This was Munster's first home defeat of the season and first in Thomond Park in the PRO12 since September 2014. In securing the losing bonus point the province stayed in second place moving to 28 points, a point ahead of Leinster, but Scarlets on 26 points have a game to play on Sunday. Tonight's game saw prop James Cronin make his 50th appearance for the province while Lucas Gonzalez Amorosino made his first start. Hooker Niall Scannell made his first start of the season and scored his first try for Munster. 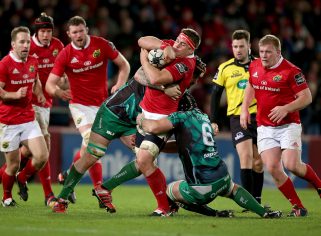