James Coughlan will captain the side this weekend in the absence of Peter O’Mahony who has been ruled out for the rest of the season following reconstructive shoulder surgery earlier this week.

Speaking after training yesterday, Head Coach Rob Penney spoke of the importance of squad captain O’Mahony’s involvement for the remainder of the season, “Peter has an important role still to play, he’ll do some analysis for us and he’ll be supporting the group in behind the scenes with us coaches and the players, helping prepare for the games ahead.

“I spoke to him following the surgery and he was in a buoyant enough mood given the disappointment of the news. Peter is a pragmatic type person so he’s approaching it with a real view of getting himself right for the long term. The surgeon said it was a great success, they had to do a little bit more than they thought, so hopefully now he can start into his rehab.

“I wouldn’t want to put a time on his return but it will be a protracted length of time and the key now is that he rehabs it well and doesn’t try to fix it too early.”

This weekend sees a total of seven personnel changes from the side that started last Saturday against Toulouse in the Heineken Cup.

BJ Botha is the only front row member to remain in situ, and will pack down alongside Duncan Casey at hooker and John Ryan at loose head. Both Casey and Ryan gained valuable Heineken Cup experience last weekend.

Following on from his man of the match display against Toulouse, CJ Stander starts this week, Sean Dougall returns at open-side, with Captain James Coughlan completing the back row at 8.

This week JJ Hanrahan joins Murray in the half back partnership while the back line sees Keith Earls move to outside centre in the absence of Casey Laulala who continues to recuperate after sustaining a fractured bone in his right hand against Toulouse.

Gerhard van den Heever takes Earls’ position on the wing, the South African flyer hoping to add to his tally of two tries in six matches in the RaboDirect PRO12.

Munster also include a wealth of experience on the bench that includes four of last weekend’s match day team.

Tickets are on sale for the game online here, from the ticket offices in Musgrave Park and Thomond Park, or by calling 0818 719 300. Kick-off the school Easter holidays in Thomond Park on Saturday night. Kids go free with the Family Terrace ticket packs – €;40 for 2 adults and 2 kids.

Munster’s unbeaten record at home in this season’s RaboDirect PRO12 has come to an end after a comprehensive defeat at the hands of Glasgow Warriors.

Munster supporters turned up at Thomond Park tonight hoping to see their side recreate some of the magical play seen last weekend in the Heineken Cup. However, Munster’s performance fell well short of what we witnessed against Toulouse.

Warriors came into the game with a lot to play for, still chasing second spot on the table and with a game in hand. The visitors set down an early marker, dominating proceedings up front and using the maul effectively to gain territory. Jonny Gray was first to cross for Warriors after 4 minutes with Duncan Weir converting. Not rolling away from Munster gifted Glasgow another three points and left the home side with a lot to do just minutes into the game.

Munster managed to get more of the ball 10 minutes in and looked threatening out wide, notably Simon Zebo. However the Glasgow defence held tough, with Munster often forcing the pass and knocking on as a result. Unable to find a way through, JJ Hanrahan started to kick for territory in behind the opposition defence.

Munster maintained most of the possession for the next 10 minutes and as the game progressed were well able to create an overlap of numbers in the wide channels. Chris Cusiter’s foot was just enough to deny CJ Stander try number one, but minutes later the South African crashed over the line again, this time no question about the grounding – Munster 5 Warriors 10.

However, the home side were unable to kick on from here, losing Hanrahan (Keatley replaced) to injury after 21 minutes and lacking the precision and clinical finishing they displayed last weekend.

Sean Maitland exposed Munster defensively when Simon Zebo broke the line, giving the Scottish international a large gap to exploit when scoring Warrior’s second try. The visitors were equally as potent when keeping it tight, and man of the match Josh Strauss provided them with just reward for patience and phase building when he scored their third try on 38 minutes.

Munster rang in the changes throughout the second half, Kilcoyne, Murphy, Williams, MacDonald, Holland and Butler all featuring. Despite retaining most of the possession and winning the lion’s share of penalties at scrum time, repeated handling errors coupled with a strong Glasgow defence meant Munster we’re unable to reduce the visitor’s healthy lead.

A fantastic try saving tackle from Gerhard Van Den Heever spared Munster’s blushes even further, against a side who had gained the upper hand across the park, neutralising the Munster maul, using their own maul to great effect and exposing Munster out wide when they needed to.

Full time score Munster 5 Glasgow Warriors 22 – Warriors' first win on Munster soil since 2008. Tonight’s result means that Munster drop to 3rd in the table and Warriors remain 4th, just three points behind Munster and with a game in hand. 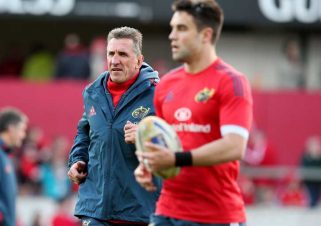