And when the sides last met in Thomond Park Stadium on the December night that John Hayes bade goodbye to rugby, although they won 24-9, it might have been another one score game had Niall O'Connor been a little more accurate with the placed ball.

It could be argued that Munster will arrive in a frail state of mind after that reversal last time out against Aironi whilst there no argument but that they have the most to lose if the result goes against them tonight.

The loss in Italy coupled with Ospreys shock win last nigh in the RDS leaves Tony McGahan's side in third place in the table and Ulster, Glasgow Warriors and whoever wins between the Blues and Scarlets at the Cardiff City Stadium today, queueing up behind to have a pop.

And yes Munster have home advantage in three of their last four games but those three games are against top notch opponents (Leinster, Warriors, Ulster) with play off ambitions of their own. So the narrow margins that will decide who progresses to the play offs could ultimately be down to tonight's result.

The changes McGahan makes are routine enough in line with what he's been doing, and it has to be said successfully, throughout this RaboDirect PRO12 campaign.

Tomas O'Leary & Damien Varley – unavaliable for the Aironi game – James Coughlan, Johne Murphy (both rested that weekend) are back in the starting XV and should provide the oomph that was so patently missing that day.

Former Connacht 10, Ian Keatley who was the chief architect of Connacht's downfall in Limerick in December, starts alongside O'Leary and David Wallace will continue to get much needed game time under his belt.

Munster Keep Their Heads To Take The Points

You earn your crust when you come to the Sportsgrounds and Munster had to work an extra shift before coming away with the spoils, a 20-16 win in front of a record raucous crowd in the RaboDirect PRO12 game.

And yes they rode their luck for long periods, no more so than near the end of the opening half when Henry Fa’afili’s one-handed off load just failed to find Ethienne Reynecke who had the line at his mercy.

And even closer to the half-time whistle they again laid siege to the Munster line but to avail and went into the changing rooms with a 10-6 lead that was no reflection and scant reward for the inventive imaginative fare they’d served up in that opening half.

But perhaps two incidents in the second half shaped the outcome of this game. The first came just after half time after Miah Nikora had stretched the lead to seven (13-6). The Connacht out-half then floated a beautifully crossfield kick to the right hand corner and the onrushing Gavin Duffy. Duffy gathered and twisted for the line but Simon Zebo did superbly well to wrap him up and prevent the touchdown.

A try at that stage would have left Munster with a mountain to climb.

Then, as the game approached the end of the third quarter, and just after Tony McGahan had introduced Marcus Horan and Mike Sherry, a long Johne Murphy cut-out pass released Denis Hurley. Murphy involved himself again before setting Zebo off for the line.

Connacht regained the lead with another Nikora penalty but with 13 minutes to go, off the top line-out ball sent the excellent Tomas O’Leary off at full pelt and after he’d avoided the attention of Rodney Ah You, O’Leary found Tommy O’Donnell – a planned half-time replacement for David Wallace – on a perfectly taken line for their second try under the sticks.

In fairness to Connacht, they refused to throw in the towel and as they had done all night in contributing handsomely to a cracking contest, came back down field forcing Munster to once again to lay their bodies on the line.

But just as they’d done- as they’d had to – for long period of the opening half and a crucial ten minute period after the restart, Munster’s defence proved unyielding They ended the game defending desperately inside their 22 as wave after wave of Connacht offence was launched in search of the try that would have earned victory.

Turnover ball earned precious territory in the dying moments and they clung on for a win that though some might consider fortuitous was nevertheless deserved for the manner in which they created and took their scores, kept their patience and just as importantly, their faith in themselves. 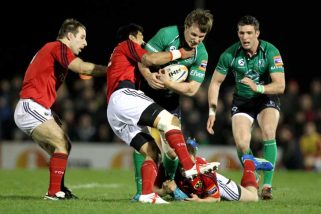 Munster Keep Their Heads To Take The Points