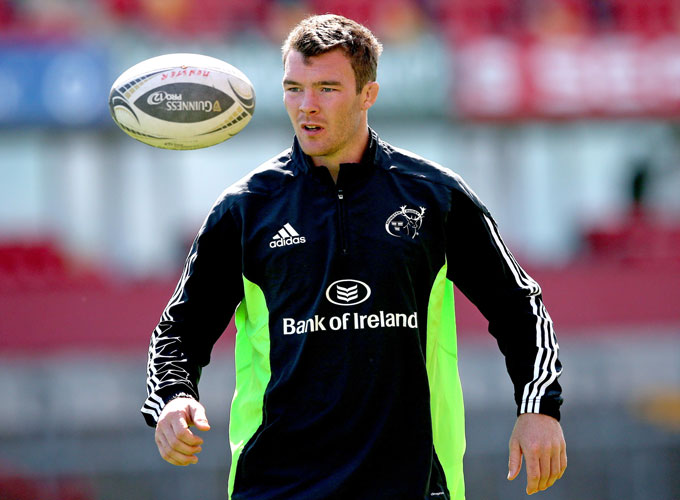 O’Mahony and Zebo have successfully rehabbed their respective hip and back complaints to take their place in a side that sees four personnel changes to the starting 15 that defeated Dragons in Cork last weekend.

Dave Kilcoyne and Stephen Archer both return to join Eusebio Guinazu in the front row, while O’Mahony’s start at 6 see’s Donnacha Ryan revert to the second row to partner Paul O’Connell with Paddy Butler and CJ Stander remaining at 7 and 8.

Last weekend’s Man of the Match Conor Murray continues at half back alongside Ian Keatley, as do Denis Hurley and Andrew Smith in the centre, while the final change sees Simon Zebo re-join Keith Earls and Felix Jones in the back three.

From the bench, Duncan Casey could make his return to action after recovering from a back injury while BJ Botha draws ever closer to the century mark and could make his 99th appearance for the province this weekend.

Join the almost 15,000 who have already signed up to cheer on Munster in Limerick tomorrow afternoon.

Tickets from just €;20 for Adults and great value Family Terrace Packs from just €;40 are available to purchase online here, from the Munster Rugby Ticket Offices at Irish Independent Park and Thomond Park, or by calling 0818 719 300.

Tickets will also be available at the ground on matchday – from 9am at the Mobile Ticket Unit in the Fan Zone Plaza, and from 12.30pm at the West Stand ticket booth.

GROUP SPECIAL OFFER – 20 Junior tickets & 5 Adult tickets just €;100.
Should your local youth groups, club or school, etc be interested in availing of this offer, please contact the Munster Rugby Ticket Office on 061-421103 or by emailing tickets@munsterrugby.ie
These tickets are subject to availability so don't delay and are located in the terraces at Thomond Park.

Munster will face Glasgow Warriors in the Guinness PRO12 final in Ravenhill after an incredible 21-18 win over Ospreys at Thomond Park.

Josh Matavesi crossed at the death for what would have been the winning try for the Ospreys but a knock-on in the build-up meant the try was ruled out and Munster progressed to the final.

It was an absorbing first half with Simon Zebo’s try just before the interval leaving Munster 11-3 ahead.
An action-packed first 13 minutes of the second half saw both sides cross for two tries with Denis Hurley and Paddy Butler touching down for Munster.

Despite some fierce Ospreys pressure, Munster hung on and, although it looked like the Ospreys had snatched the win late on through Matavesi, the earlier infringement meant the score was ruled out with the final whistle immediately sounding to spark wild celebrations.

Paul O’Connell, who admitted afterwards that it may be his last appearance at Thomond Park, led the players out to salute the outstanding crowd afterwards with Munster’s campaign ending in the PRO12 final next week.

Ospreys made a strong start and owned the ball for nearly the entire first six minutes. Dan Biggar pulled a drop goal wide after less than 80 seconds with brilliant defence keeping the Munster line intact.

After surviving the initial onslaught, it was then the hosts’ chance to attack and the impressive Stephen Archer was bundled into touch just yards from the Ospreys line after a decent spell of pressure.

Ospreys then enjoyed another good period and were rewarded with a Dan Biggar penalty on 13 minutes as they took the lead.

A high tackle at the other end gave Ian Keatley his first opportunity shortly afterwards and he made no mistake with the penalty to level matters. Conor Murray then limped off with a leg injury to be replaced by Duncan Williams, who went on to have an excellent game. Keatley gave Munster a 6-3 lead after a rolling maul was illegally halted on 23 minutes.

The pivotal score of the half came just before the break with Simon Zebo finishing off a superb team move in the left corner. It all started with a solid scrum on halfway as Williams found Keatley whose inside pass found the oncoming CJ Stander, later awarded man-of-the-match, in space. The South African then passed it to Paddy Butler who unselfishly fed Zebo to finish in the left corner. Keatley missed the conversion but Munster went in 11-3 ahead at the break.

A breathtaking opening 13 minutes of the second half saw both attacks take control with two tries apiece.
Denis Hurley shrugged off Eli Walker to touch down in the right corner less than three minutes after the interval to make it 16-3 to Munster.

Ospreys were back in it four minutes later, however, as a blind pass off the back of the scrum by Stander was intercepted by Rhys Webb to scoot over in the right corner. Biggar pulled the conversion left and Munster led 16-8 with 48 minutes on the clock.

Butler burst over from short range on 50 minutes to restore the Munster lead after some great work by the outstanding Dave Kilcoyne. But Jeff Hassler hit back for Ospreys after racing in from halfway following Zebo’s loose kick with Biggar’s conversion reducing the gap to just six after 53 minutes.

Biggar slotted a penalty on 67 minutes to make it a three-point game after the injured Simon Zebo was helped from play with Ronan O’Mahony taking his place on the wing.

Missed penalties from Keatley and his replacement JJ Hanrahan saw the crowd grow increasingly edgy and there was despair when Matavesi crossed in the right corner late on but the try was ruled out and Munster live to fight another day. 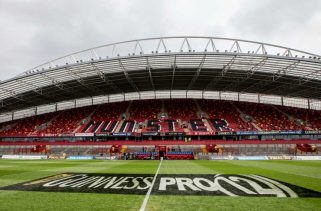