The indications are that Munster will not want for support this afternoon when they attempt to become the only Irish side to win in the Heineken Cup this weekend.

Their Red Army of supporters are poised to swoop on Watford's Vicarage Road for the Round 4 clash with Saracens (3pm), a game that will go some way to deciding what has become a massively competitive Pool.

Racing Metro's 15-3 win over Edinburgh in Murrayfield on Friday keeps their hopes very much alive and they lead the Pool by 2 points. So whoever takes the spoils today in Vicarage Road will go into the New Year with their destiny very much in their own hands.

Saracens rarely if ever sell out their home ground but the talk here this morning is that we are heading for a sell out as the English based Munster supporters rally to the cause.

And for the English side it seems very much a case of 'putting a wrong right', after a Thomond Park Stadium defeat that owed much to their own below par performance with little credit to Munster for the part they played.

And it was that attitude Rob Penney wasn't inclined to discourage at the post match media briefing believing it might allow Munster slip in under the radar.

However. he's canny enough to know that once Saracens do notice the blip on their screen, his team will be in for another torrid examination. He has had to re-adjust his side with the injury to Keith Earls but is blessed of course to have a quality player like Casey Laulala to come in.

Once again the old heads, Donnacha O'Callaghan and Ronan O'Gara will be asked to draw from their deep well of experience while James Coughlan, winning his 100th cap can be relied on to deliver his usual compelling shift.

It might be too that the young bloods will have drawn huge confidence from what they achieved in Limerick last week. And if they can, then Munster could make their supporter's journey well worthwhile.

After the game in Thomond Park Stadium, it was felt the return at Vicarage Road would come down to small margins. And so it proved as Munster went down 19-13 to leave themselves a sizeable hill to climb if they’re to make it to the knock out stages of this season’s Heineken Cup.

But at least they know for sure what's now required. They'll have to win in Murrayfield and then back in Limerick, make one of those a five pointer and hope for favours from others.

In many ways, yesterday's was a game of two halves, Munster the better in the first, Saracens the masters of a second that saw the ball been given air by both 10s more rather than being put through the hands as the narrow confines of the soccer dictated.

As they had anticipated Munster found this a much improved Saracens side whose set piece was appreciably better than a week prior. In particular their line-out work was impeccable perhaps best illustrated when O'Gara struck a superb touchfind to force a defensive five metre lineout with less that ten minutes to go. But Munster were unable to exert any pressure on the throw that went long over the back to be secured and cleared with clinical efficiency.

Donnacha Ryan and Donncha O'Callaghan were solid on their own throw but the well marshalled home defence denied the Munster backs any opportunity to capitalise.

The game started at a frantic pace and the tempo never really dropped until maybe the closing stages by which time, Saracens had made use of their bench to good affect.

And when the talk is of the slight margins that decide games, it was in the final ten minutes or so that Saracens eeked out their victory.

Ronan O'Gara, superb all day – despite getting a right good shoe-ing under the noise of the assistant referee just before the break – was wide with a drop goal attempt and then a forty metre penalty that might have tied the game and shortly after Owen Farrell kicked his side into a six point lead.

To their immense credit, Munster dragged tired bodies back downfield for one last assault. But credit too, to the Saracen defence, who resisted valiantly.

Early Saracens pressure ended when Farrell was wide with an easy enough drop-goal but he atoned with a forty five metre penalty in the 9th minute.

O'Gara leveled at the end of the opening quarter but when Richard Wigglesworth threaded through against a flat Munster defence there was no-one home and David Strettle easily won the race for the touchdown.

Farrell added the touchline conversion but the lead only lasted five minutes, James Downey intercepting Farrell's pass to Brad Barritt to race clear and when hauled down getting his pass off to Doug Howlett to skate home.

O'Gara converted to send the sides in at half time 10 points apiece, Farrell wide just before the whistle after O'Gara, in retrieving a dangerous situation, was harshly penalised.

The Munster out-half put his side in front with a 51st minute penalty but that was to be the last score from the visitors.

And in fairness to the home side, they presented Munster with precious few opportunities in that second half.

Farrell leveled again almost on the hour and two further penalties sealed the outcome to put the English club in control of the Pool but with a trip next to Nantes where they'll play second placed Racing Metro. 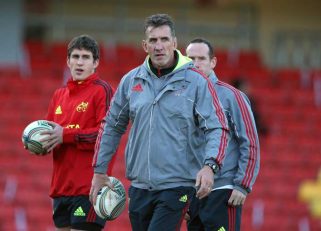