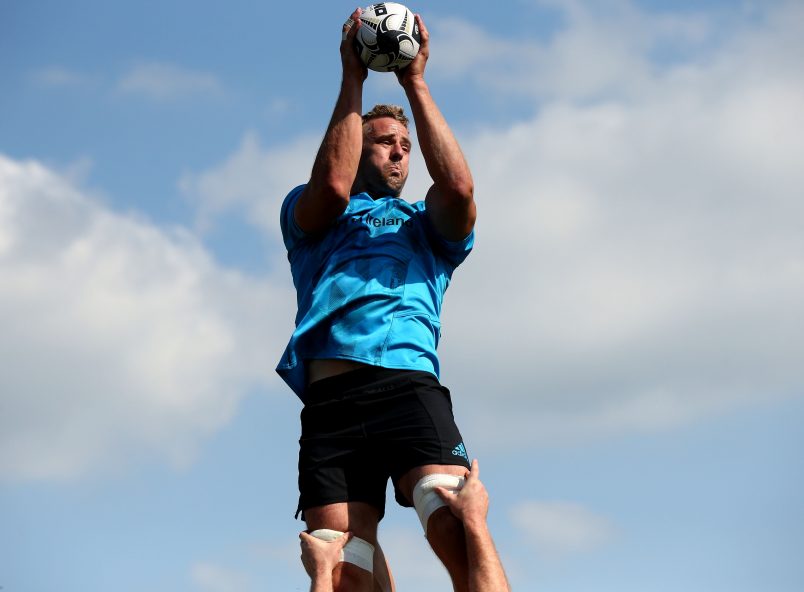 Head Coach Anthony Foley has named his side to face Ospreys in the Liberty Stadium on Sunday with Tyler Bleyendaal, Mark Chisholm and Francis Saili joining academy player Stephen Fitzgerald in making their first PRO12 starts.

Bleyendaal made his debut for the province against Treviso last weekend when coming off the bench after 55 minutes and this week he makes his first PRO12 start joining Cathal Sheridan in the half-backs.

In total Foley makes 8 changes to the starting XV for Sunday’s round 2 encounter which kicks off at 2.30pm.

In the front row returning international Dave Kilcoyne makes his first appearance of the season scrumming down alongside Mike Sherry and Stephen Archer who is promoted from the bench for his 99th appearance for the province.

Munster’s newest signing Mark Chisholm will make his debut for the province when he lines out next to Dave Foley while the only change to the backrow sees Robin Copeland introduced at number 8.

Francis Saili has successfully completed all of his return to play protocols and makes his PRO12 debut in joining academy player Rory Scannell in the centre partnership. Scannell’s academy colleague Stephen Fitzgerald is another to make his competitive debut and the 19-year-old is named on the wing joining Andrew Conway and Felix Jones in the back three. Jones takes over the captaincy role this week.

In the replacements hooker Duncan Casey is included in his first match-day squad of the season while Jordan Coghlan is in line to make his Munster PRO12 debut if sprung from the bench.

Munster Just Shade It In Swansea 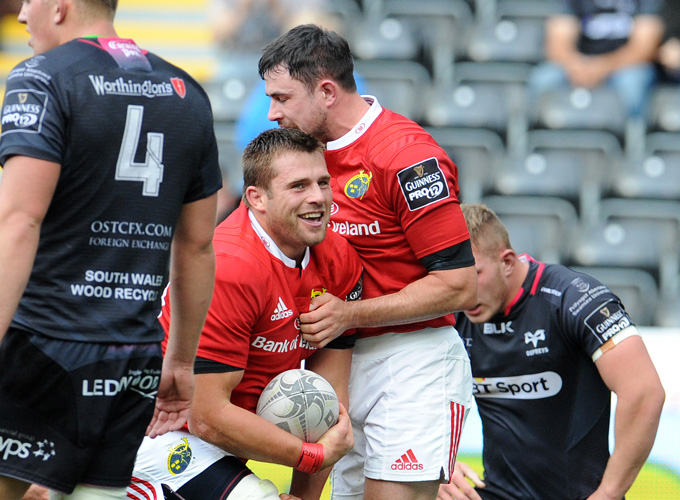 A last minute try from CJ Stander and conversion by Ian Keatley handed Munster a last gasp victory at the Liberty Stadium this afternoon. An earlier try from debutant Stephen Fitzgerald and 8 points from the boot of Tyler Bleyendaal also helped Munster to an 18-20 victory over the Ospreys.

Prior to kick-off, Munster joined Ospreys in honouring the memory of former player Jerry Collins who, along with his wife Alana, died following a road traffic accident in France at the start of June. Francis Saili was one of those who laid a wreath on the pitch before kick-off. The Munster centre had previously played with Jerry for the Asia Pacific Barbarians v Saracens in Hong Kong in 2012.

Following a minutes silence the Ospreys number 6 jersey was retired for the game and the 6th minute of the encounter was marked with warm applause from the Liberty Stadium crowd.

It was the hosts who dominated the opening 20 minutes of the game, not least when a 16 phase attack brought them from the half way line to within inches of the Munster whitewash. The pressure told when Munster went offside in defence and a Sam Davies penalty opened the scoring on 9 minutes.

The next score came the way of the Munster-men when Ospreys went off their feet and Tyler Bleyendaal stepped up to slot his first penalty of the league, leaving the sides all square on 13 minutes.

Anthony Foley won’t have been happy with the easy yards Brendon Leonard made through visiting defence just minutes later and with Munster struggling to get back in defence another penalty was conceded just outside the Munster 22. Testing debutant Stephen Fitzgerald, Ospreys went for the cross-field kick, however the academy winger acquitted himself well in backtracking to claim the high ball, averting the danger.

Ospreys came again, using their maul and physicality to good effect across 12 phases before a clash of heads involving Dave Kilcoyne brought play to a halt. The subsequent five minutes saw both sides place opposition scrums under serious pressure before Munster eventually won the tit-for-tat set piece battle and cleared their lines to half way.

Infringement from Ospreys on the ground then allowed Bleyendaal bring Munster deep into Ospreys’ 22 for the first time in the game before Cathal Sheridan sent a neat crosskick down the left wing. Speedster Fitzgerald did well in the chase but was unable to control the grounding.

Munster could have been in yet again when Bleyendaal’s inside pass to Copeland put the number 8 in space. Bringing Munster to within 5 metres of the line, the support was slow in arriving and the chance went a begging.

Foley’s charges did eventually take the lead for the first time on 30 minutes when Ospreys went offside in defence and Bleyendaal made no mistake in slotting the long range effort.

However, two further infringements from the men in red gifted the deadly accurate Davies two more shots at goal which he duly converted to hand Ospreys at 9-6 lead at the interval.

A shaky start to the second 40 for Munster saw Davies continue from where he left off and with Munster going in from the side, the host’s advantage was out to 6.

Munster soon began to mount an attack on opposition territory. Sensing the upper hand at set piece, Bleyendaal turned down a kickable shot at goal when Ospreys went in off their feet, instead opting for the corner on 51 minutes.

With possession secured, the pack mauled and went through a couple of phases before Bleyendaal executed a perfectly weighted cross-field kick for the oncoming Fitzgerald who capped an already impressive PRO12 debut with the first try of the game.

In attempting to quell any Munster momentum, Ospreys came again. A clever kick and chase downfield found Robin Copeland isolated and Davies made it 15-13 to the Welshmen. Just a few minutes later, the Ospreys playmaker made it 6 from 6 when Munster also infringed at scrum time.

At 18-13 with only minutes to go, Foley’s charges needed to dig deep, and that they did.

Initially the province responded with an 11 phase attack and when that yielded nothing, they went again, showing patience and composure in a 14 phase onslaught that eventually forced Ospreys to go offside.

Ian Keatley kicked to the corner and Munster went to the maul before going through the phases from right to left and it was CJ Stander who forced his way over the line on the 80th minute – scoring his third try in just two games.

With the draw secure and the conversion to come, Keatley showed the necessary poise in kicking Munster to a hard fought 18-20 victory, just Muster’s 4th in their last 13 trips to Swansea.

The win sees Munster go third on the Guinness PRO12 table on 8 points, behind Scarlets (1st) and Edinburgh (2nd) on points difference.

PRO12 Round 2 round-up: The fixture saw Tyler Bleyendaal, Mark Chisholm and Francis Saili join academy player Stephen Fitzgerald in making their first PRO12 starts, while Jordan Coghlan made his competitive debut for Munster. The win ended Ospreys’ 14 match unbeaten run at the Liberty Stadium and, incidentally, Munster were also last team to win there in 2014. 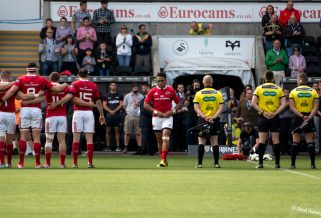 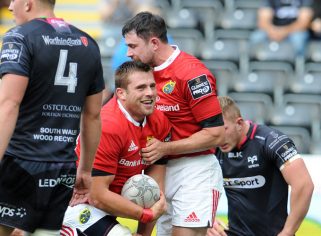 Munster Just Shade It In Swansea